Call of Duty: Ghosts and Xbox One are a match made in heaven.  With the release of the next generation Microsoft console, Activision and Microsoft have claimed the title of “the number one most played Xbox One multiplayer game worldwide.” 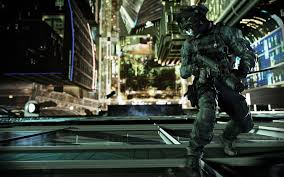 Microsoft sold over one million Xbox One consoles within the first 24 hours of the launch on November 22 and continues to sell out at all major retailers.  It is expected to continue well after the holiday season, but Call of Duty: Ghosts is in stock everywhere.

“Around the globe, Call of Duty: Ghosts is leading the next generation. It’s the #1 selling title at key retailers and it’s also the most played game on Xbox One and PS4 globally,” said Eric Hirshberg, CEO of Activision Publishing, Inc. “As we’ve said before, we’ve got the best community of fans in the world, and we’re thrilled they’re coming with us to the next generation.”

Call of Duty: Ghosts boasts a 74 metacritic score and although, an average score compared to other first person shooters currently, the general consensus among top critics is that the multiplayer portion of the game is dense enough to keep players playing hundreds of hours.  There is endless customization possibilities for players with a series of unlocks, prestige ranking, and a million different ways to customize your weapon load outs for any specific type of game.

“Congratulations to our friends at Microsoft for the launch of the Xbox One,” said Dave Stohl, executive vice president, worldwide studios, Activision Publishing, Inc. “Xbox and Call of Duty together have formed a valued and lasting partnership on Xbox 360, and we know this is just the beginning. So we look forward to an exciting new future on Xbox One.”

Activision and Microsoft predict strong sales throughout the holiday season and into the new year.

Call of Duty: Ghosts is available now at all major retailers for all major consoles.

Justin Camos is a lover of Breaking Bad and pop punk music. Follow him on Twitter @JustinCamos.
See all posts by Justin Camos