When The Muppets released in 2011 it was a celebrated return to the movies for Kermit, Miss Piggy, and the whole gang. That film was a nostalgia-laden trip through Muppet history and brought them back to relevance after years away. Their follow-up film, Muppets Most Wanted, is an enjoyable caper but as The Muppets themselves sing early on, “everybody knows that the sequel’s never quite as good.”

Arguably, 2011’s The Muppets needed to accomplish more and therefore became a more important film. Muppets Most Wanted, on the other hand, is simply a story of mistaken identities that’s well written, excellently performed, full of great gags and songs, but isn’t trying to reinvigorate an old brand. Coming back to direct, James Bobin doesn’t outdo his first effort, but by no means is it a sorry second offering.

Keeping that in mind, it’s much easier to appreciate this Muppet sequel – initially titled The Muppets… Again, which is a phrase still used in the movie’s opening number. Instead of tugging at your heartstrings, Muppets Most Wanted just wants to entertain. And entertain it does. Clocking in at 103 minutes, the film zigs and zags from joke to song to cameo and back for another joke at a speedy pace, easily masking the film’s paper thin plot.

Muppets Most Wanted starts immediately from where The Muppets left off. With the gang officially back together, the Muppets hire manager, Dominic Badguy (Ricky Gervais) for a new world tour, capitalizing on their recent fame. Unfortunately, Badguy is literally a bad guy who’s in cahoots with the world’s number one criminal, Constantine. A dead ringer for Kermit, the two are switched, which lands Kermit in a Russian gulag and Constantine in the spotlight. 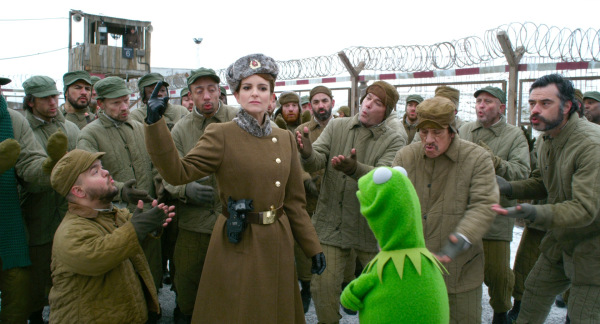 Rounding out the human cast are Tina Fey as that gulag’s overseer (and secret Kermit superfan), Nadya, and Ty Burrell as a French Interpol agent, Jean Pierre Napoleon, tasked with finding the culprit behind a slew of mysterious robberies. All three – Gervais, Fey, and Burrell – accompany one of the film’s threads: Badguy with the touring Muppets, Nadya at the gulag with Kermit, and Jean Pierre is joined on his investigation by C.I.A.’s Sam the Eagle. And each would be funny on their own, but add in some Muppets who aren’t afraid of a little improv and the laughs only get bigger. Both Fey and Gervais surprise with their musical numbers, and it begs the question why the two don’t sing and dance, even for comedic effect, more often?

Speaking of the songs, the quality of Brett McKenzie‘s work hasn’t faltered one bit. Yet, these musical numbers don’t linger with the audience or have as much impact as a song like “Muppet or Man”. In fact, their best number isn’t even sung by a Muppet! It’s Constantine’s song where he woos Miss Piggy, “I’ll Get You What You Want (Cockatoo in Malibu)”, that’s the stand out.

More than once a self-referential crack is made, either about the overlooked Muppets or how this is technically the gang’s seventh sequel. Not that Muppets have ever strayed from breaking the fourth wall, but it happens abundantly in Muppets Most Wanted. There’s a staggering number of cameos ranging from blink and you’ll miss them appearances by James McAvoy and Chloe Moretz to slightly more inflated roles, like Ray Liotta and Danny Trejo as Kermit’s fellow inmates. Clearly, nobody turned down the chance to appear in Muppets Most Wanted.

As for the Muppets, this time the group as a whole doesn’t feature as largely as they did in their previous flick. Favorites like Ralph, Scooter and Gonzo for the most part only appear when the traveling show calls for them. It’s mostly Kermit, his evil doppelganger, Constantine, and Miss Piggy for the bulk of the picture. Eventually, Walter, Fozzie Bear, and Animal wise up that this frog isn’t their frog, but until then the Muppets are content with “Kermit’s” lax new work ethic, approving any sketch anyone wants to perform whether it benefits the show or not. 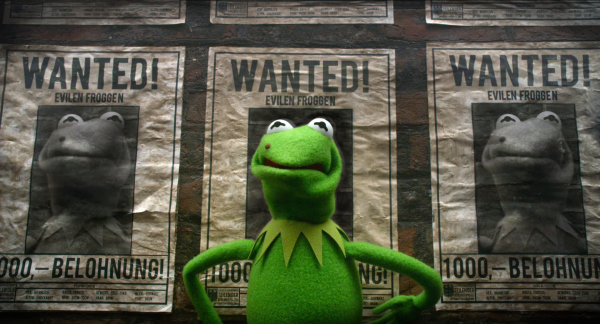 Where The Muppets dealt with broad themes of discovering one’s place in the world, Muppets Most Wanted goes with the idea of Kermit being irreplaceable. Kind of a no brainer, really, and something that’s been touched on before. His replacement, however, is a welcomed addition. Constantine may be nothing more than Kermit with a mole and a ridiculously evil-sounding accent, but his painfully bad attempts at mimicking Kermit are some of the movie’s funniest moments.

Muppets Most Wanted pokes fun at a caveat of tropes from mistaken identities to prison breaks, and still manages a few great musical numbers. More than once you’ll find yourself caring not so much about where the story goes next, but what next gag will make you laugh loudest.