Maybe it’s just because I loved Guardians of the Galaxy so much, but I am really looking forward to following Rocket as he gets himself out of trouble in this series. The opening issue began developing an intriguing story line that was established previously, and this issue looks to expand upon that idea. Skottie Young found the right about of snarkiness and seriousness in the first issue, and I look forward to that progressing in this issue. 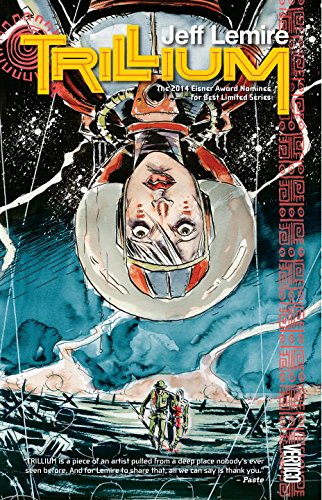 Described as “the last love story ever told”, this imaginative mini-series by Jeff Lemire combined classic pulp adventure with post-modern science-fiction in a surprisingly effective fashion. The first monthly issue numbers among the few flip-book comics (i.e. comics in which two stories are told and one reads the second story by flipping to the backcover) to truly take advantage of the format beyond simple gimmickry. For those of you who missed the series in its original release, this volume will give you a chance to see what you missed.

From the creators of the hit Cartoon Network TV show comes Steven Universe, the comic book! A blend of ‘90s action cartoons like Sailor Moon and quirky post-post-modern shows like Adventure Time, Steven Universe is a charming and hilarious tale of a boy who lives by the beach, likes donuts, and is called to defend the universe with his super secret magic powers. Teaming with mega-women Garnet, Amethyst, and Pearl, Steven somehow manages to save the day and return home in time for snacks. The comic adaptation comes from the show’s creative team and features a ‘zine collage of mini-comics, recipes, character bios, and more.