Some may wonder what point there is in a TV series tie-in comic that is set between the seasons of that  TV series.  Those who have been watching Arrow‘s third season already know which characters survived the thrilling events at the end of the second season’s epic finale. As such, there’s not a lot of opportunity for true drama when the reader knows that all the characters are going to be okay, no matter how thrilling the cliffhangers of this comic are from week to week.

Thankfully, what Arrow Season 2.5 lacks in tense drama, it more than makes up for in brilliant characterization.  This tenth issue of the series is a fine example of the standard executive producer Marc Guggenheim has set for the series as a whole and his comics in particular.  The focus of this issue lies not on high-octane action sequences but on the relationships between our core cast.

As the book opens, Oliver Queen is preparing for a business meeting regarding a plan that may restore Queen Consolidated to its former glory and put the company back under his control. At the same time, John Diggle argues with his ex-wife/current girlfriend Lyla Michaels about her taking an assignment that will send her into a war zone while she is four months pregnant.  And Roy Harper – newly recovered from a coma – will receive a gift that will put him one step closer to following in the footsteps of the man who saved his life and showed him a better way of living.

The interaction between all the series regulars is wonderful. Guggenheim has a good ear for witty dialogue that is showcased throughout the issue. This comic truly feels like an episode of the TV show.

Fans of the show will enjoy this issue, not only for these wonderful character moments, but because of all the information it gives us regarding some questions many fans have had in the wake of Season 3. For instance, this issue answers the question of what happened to Walter Steele – Ollie’s step-father and former Queen Consolidated CEO.  After all, one would think he’d want to get involved in Oliver’s efforts to win back the family company!

This issue reveals that Steele was indeed involved in the planning stages of Oliver’s endeavors.  We also learn how Ollie has been paying his bills in the wake of his losing the family fortune (his mother had a rather large life insurance policy) and where Felicity was employed after she was fired from Queen Consolidated. The answer to this last question also offers a nice little in-joke for DC Comics fans, as we find out Felicity has been working for Ted “Blue Beetle” Kord! 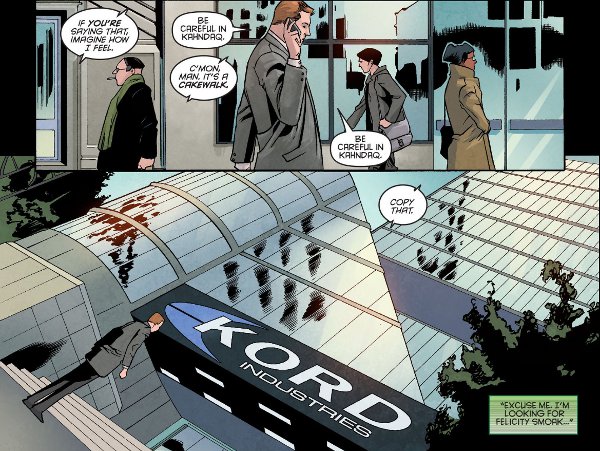 The best part of this issue, however, may come at the very end.  Since it started, Arrow Season 2.5 has featured a back-up story involving the Suicide Squad and a mission to rescue hostages kidnapped by religious extremists. Written by Arrow writer Keto Shimizu, the only bad part about this story has been its ridiculously short length – one page an issue!  With this issue, it is suggested that the two stories may be overlapping and that the next issue may well focus on John Diggle leading the Suicide Squad into battle!

The artwork for the main part of the issue ranges from fair to good. Artist Joe Bennett is quite good at caricaturing the show’s cast in close-ups and his splash pages are memorable.  However, his work loses much of its detail past the mid-range and inker Craig Yeung doesn’t do much to enhance Bennett’s pencils. Colorist Jim Charalampidis seems completely flummoxed by the hair colors of our heroes and depicts the dark blonde Oliver Queen and redhead Roy Harper with varying shades of brown throughout.

The artwork of Szymon Kudranski, by contrast, is great all around and one wishes that he were working on the main portion of the book rather than the Suicide Squad back-up story.

That said, Arrow Season 2.5‘s whole is far more than the sum of its parts. The excellent writing of the main story more than makes up for the artistic short-comings and the DCTV Universe Suicide Squad need their own spin-off comic immediately. As is, this book is a must-read for all Arrow-Heads.