Scott Lang is kind of a screw-up.

Okay. Cut the “kind-of.” He’s a total screw-up and he’ll be the first to admit it.

There was only one thing Scott was ever any good at and that was stealing. Unfortunately, he got caught because of a screw-up. That screwed-up his marriage, which was already pretty screwed-up because Scott was as bad at being a husband as he was good at being a thief. At least until he screwed-up and got caught. But that’s not important.

What is important was that Scott was going to go straight once he got out of prison. Until he screwed up his reformation but for the noblest of reasons. Scott’s daughter Cassie had a rare heart condition and the only doctor who might be able to save her was locked-up in a high-security think-tank.

Scott Lang might have been a screw-up but he could never be accused of thinking small. Ironic really, because Scott somehow decided the only way to get to the doctor who could save Cassie’s life was to steal the Ant-Man suit from Dr. Hank Pym and use it to break into and out-of the think-tank.

But in setting out to commit a crime on a scale he’d never before attempted, Scott Lang would ironically screw-up once more… by becoming a hero. It turned out the doctor he planned to abduct was the captive of a super-villain industrialist. Suddenly, Scott Lang found himself transformed from a kidnapper to a superhero and with Hank Pym’s blessing he became the new Ant-Man. And for a while things weren’t as screwed-up as they once were.

As Ant-Man, Scott joined the Avengers. He was also a reserve member of The Fantastic Four. He even got killed and came back from the dead!  How many guys does that happen to?! Well, pretty much all of The Avengers and Fantastic Four… but again, that’s not important!

What is important is that Scott Lang is done being a screw-up. He’s got a good name. He’s got his super-suit. He’s got the love and respect of his daughter. All he needs now is a way to pay the bills. And with any luck, a new job opening for Head of Security Solutions at Stark Industries is just the break Scott needs.  Who better to protect the technology of the world’s greatest futurist than a guy who used to make a living stealing high-tech gizmos?

Yes, this could be the perfect opportunity. Assuming Scott doesn’t screw this up… 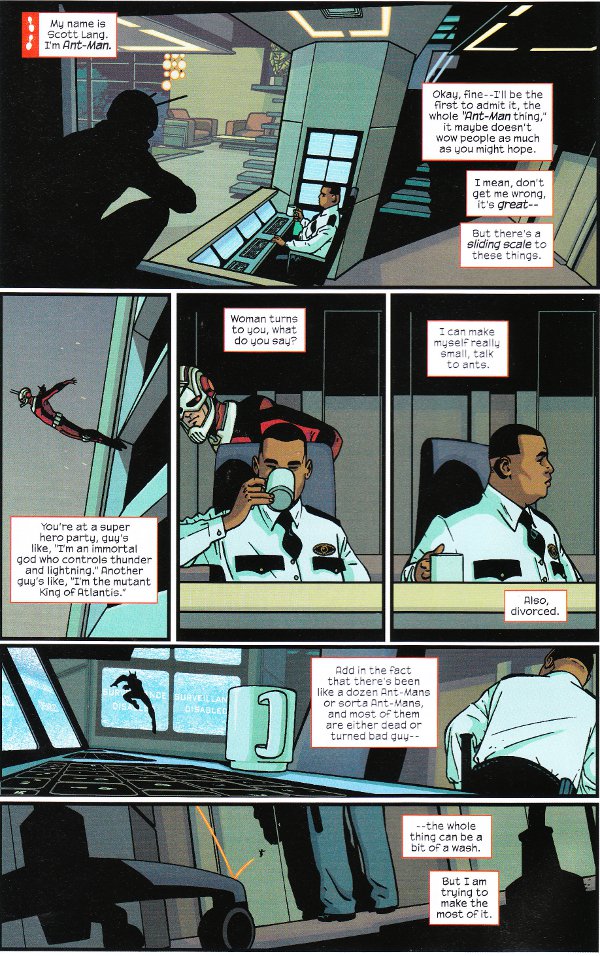 Doubtlessly the release of Ant-Man #1 was timed to coincide with the release of the first trailer for the Ant-Man movie. It was a smart move for Marvel Comics to have this new series available for the waves of curious parties who will doubtlessly descend upon the comic book shops looking for more information on Ant-Man.  Thankfully, this book is more than a mere marketing stunt.

Ant-Man #1 stands on its own merits independent of the trailer and is a darn good read. Nick Spencer does a fine job of explaining Ant-Man’s powers and legacy for new readers. More importantly, we learn who Scott Lang truly is as Spencer develops him into a likable and sympathetic protagonist. He does this through a copious amount of humor, which is firmly aimed at Scott Lang as a person rather than the Ant-Man concept. This is fortunate, because there are only so many jokes you can make about a man who shrinks and talks to ants, but there is a fair bit of comedy inherent in a superhero of the Marvel Universe going through a job interview. 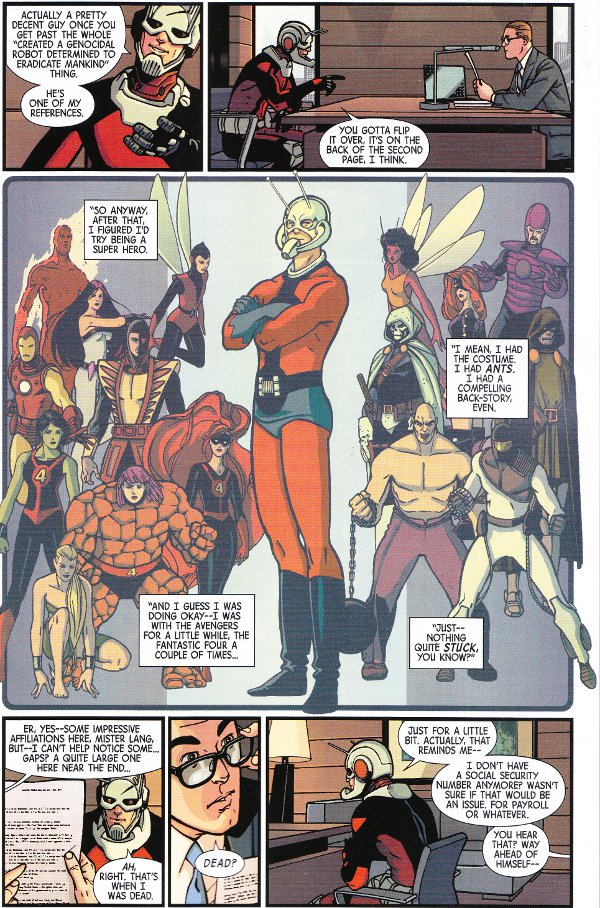 The artwork by Ramon Rosanas is a good match for Spencer’s script. Rosanas has a good sense of comedic storytelling and the framing of the panels helps to set the timing of the book’s many humorous moments.  The book’s action sequences – while few in number – are also well-blocked in terms of visual choreography. The color art  by Jordan Boyd lends a sense of vibrancy and energy to the finished artwork, even in those scenes that just depict two characters talking.

In short, Ant-Man #1 is well-worth reading.  The script is accessible, the hero is relatable and the artwork is cheerful. This is a title that is both fun and funny at a time when far too many comic books take themselves too seriously, and that is a welcome thing.