One interesting aspect of Dynamite Entertainment’s John Carter: Warlord of Mars is that the book is very much an ensemble piece despite its title. Many issues have focused upon the warrior princess/scientist Dejah Thoris just as much as her Earthly husband.  And the series has done much to present their relationship as a partnership of equals – a welcome change given the usual portrayal of women in sword-and-sorcery pulp fiction!

This issue proves something similarly unique. For John Carter is not the focus of attention in this story either.  This month’s issue is focused upon Tars Tarkas –  John Carter’s most loyal ally and a respected war chief of some renown.

Tars rules over a relatively civilized tribe of Tharks – the green skinned Martian race. Unique among Tharks, Tars Tarkas’ tribe have begun to learn the ways of compassion, led by the example of Sola – Tars Tarkas’ daughter and one of the few Tharks to whom compassion comes naturally.

It is this sense of giving that has made Sola a natural teacher and storyteller.  So unfolds one of Sola’s stories, told to amuse and educate a crowd of young Tharks. It is a tale of high adventure, focused upon her famous father and his adventures seeking his friends in the desert wastes. 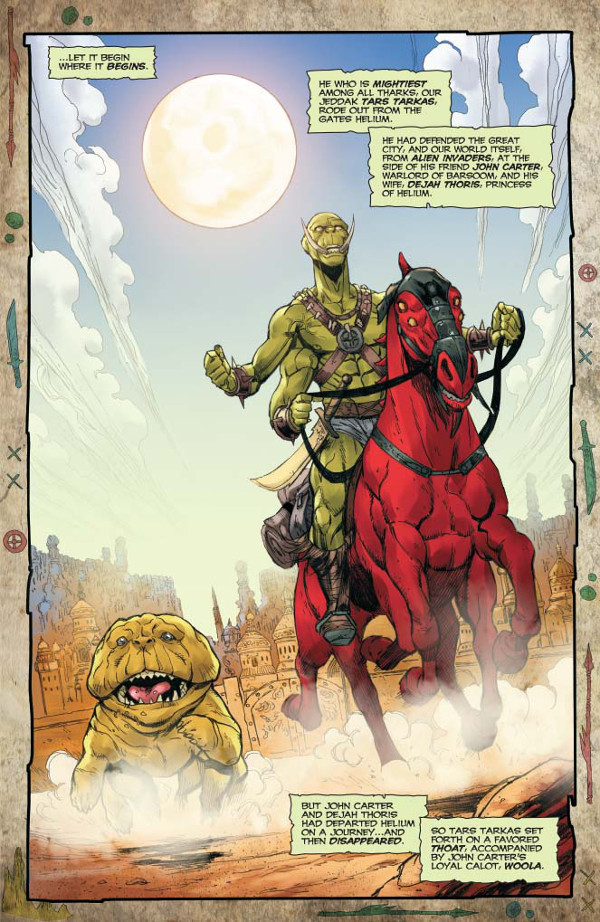 The story by Ron Marz and Ian Edginton is exciting, presented as a fable with every inch of the comic reflecting a children’s book aesthetic. The artwork by Ariel Medel presents a single image on each page, save for when a two-page spread is used. This, coupled with the words of the script surrounding the artwork, continues the fairy-tale theme. The final product looks amazing, with the vivid colors by Nanjan Jamberi and the crisp, clear lettering of Rob Steen completing the storybook look.

If you have not yet ventured forth into the world of Barsoom, you will find no better starting place than this issue. Despite being heavily based upon the mythology of Edgar Rice Burroughs’  world, it is easily accessible to new readers. More than that, it is a true ripping yarn with excellent artwork.