Several months ago Samantha Copeland was a counter-culture hero, though nobody knew her name. As the brains behind the hacktivist group Samaritan, Sam hacked the accounts of several prominent mega-churches she’d discovered were fleecing their parishioners. Samaritan then donated the stolen wealth to charity while exposing the moral and legal misdeeds of the wolfish clergy to their flocks.  While having little faith in anything personally, Samantha has strong opinions on those who would abuse the faith of others.

Things went south when Samaritan’s activities ventured into the realm of physical robberies. Innocent people were killed in a shoot-out with one church’s private security force and Samantha’s life-long friend Kyle abandoned their principles in a bid for revenge on those he blamed for the death of his brother. To prevent further deaths, Samantha turned herself in and earned herself a job with the FBI and several years probation.

Now, Samantha is partnered with the same agents once tasked with bringing her to justice – life-long company man Dwayne Campbell and fellow white-hat hacker James Miller. Despite regulations and themselves, Sam and James have begun to develop a romantic relationship. But any thoughts of love will have to wait, as the three of them take on a new case.

A terrorist bomb destroyed Saint Patrick’s Cathedral in New York City, apparently triggered by a Muslim teen immigrant. The incident has spurred a new wave of violence against American Muslims. It has also kicked-off a record fundraising effort for Senator Owen McKitrick – a presidential candidate and former pastor. But could there be more than meets the eye to the mysterious new Brotherhood Of The Islamic Crescent that is taking credit for the attack? 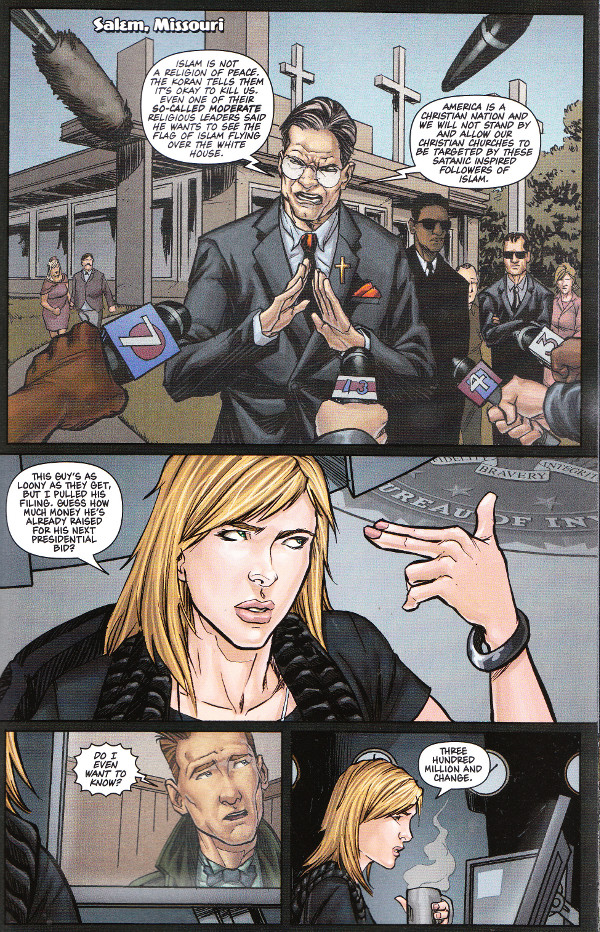 It might be impertinent to say that The Tithe has been blessed to be timely. Its first issue – based around the excesses of American mega-churchs and the prosperty gospel – released the same week that a prominent mega-church pastor came under fire for asking for donations to buy a $65 million private jet. This issue – the first part in a story line titled Islamophobia – finds itself hitting the stands in the wake of the Ahmed Mohammed case and several presidential candidates making anti-Muslim statements.

Any story that tries to be timely and deal with real-world issues runs the risk of being preachy. Thankfully, Matt Hawkins avoids this pitfall. He does this primarily by depicting the action of the story from multiple perspectives and focusing on personalities rather than events. This marks The Tithe as unique among police procedural series.

Another point in Hawkins’ favor is that his characters are nuanced beings rather than broad stereotypes. Agent Dwayne Campbell, for instance, is a devout Christian who leaves his faith at the door when it comes to his work, yet he struggles with his daughter’s conversion to Islam despite his belief in American equality. Agnostic James Miller is quick to paint all people of faith with a broad brush in his sarcastic quips yet he admonishes his partner for doing the same thing with his sexist attitude, saying “I think treating women like a problem that needs solving… might be the problem.” 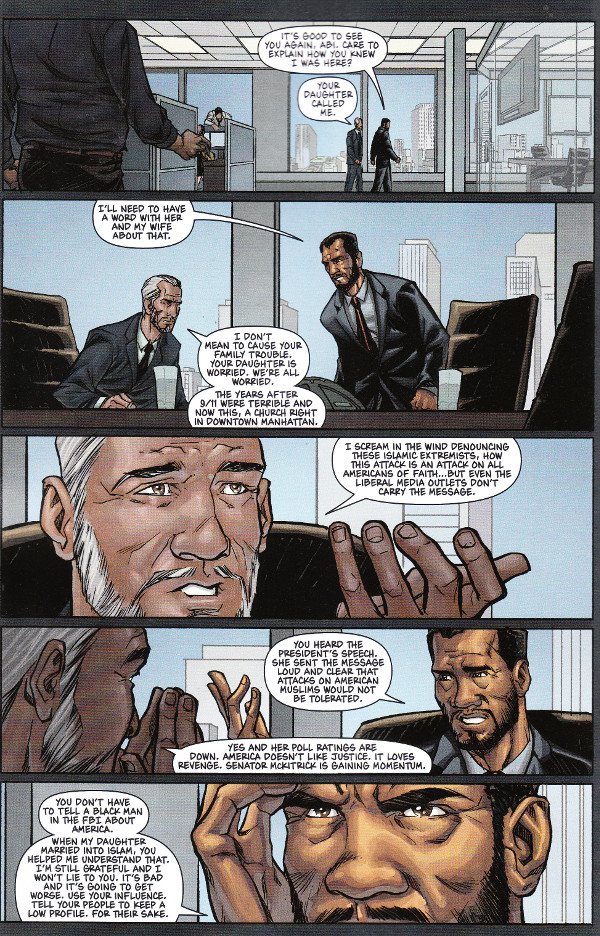 The art team does a fine job of making the book visually interesting, despite a lack of action sequences after the opening scene in the church. The perspective shifts from panel to panel, giving the impression of movement throughout.  This in spite of most of the issue being devoted toward conversations between talking heads!

If you missed out on the open arc of The Tithe, you might look into picking up the recent collection of the first four issues. But if you can’t do that, rest assured that you can jump into this book with no previous knowledge of the story so far being necessary. This issue is a good starting point for new readers and a great read.