A joint military/industrial exploration team were meant to be searching for oil in the ruins of a sunken city. What they found instead was a mysterious vessel. Possibly a space-ship. Possibly abandoned experimental military hardware. Definitely strange and unusual and potentially profitable, at least according to the company man from Vector Petroleum.

Three days later, The Doctor and Clara arrive in The Drum in search of an adventure. And from the moment The Doctor notices that The TARDIS is nervous about landing where they’ve landed, it’s clear that they’ve found it.

For three days, the survivors of the expedition have been hiding in a Faraday Cage, only venturing out for supplies during the base’s simulated daytime.  Because when it is night, the ghosts come out. Real ghosts, to The Doctor’s surprise. Or at least incorporeal, semi-transparent creatures that take on the likeness of the dead crew members, whom are murderously determined to increase their numbers that are close enough to the classical descriptions of ghosts that he might as well call them ghosts until a better name presents itself. 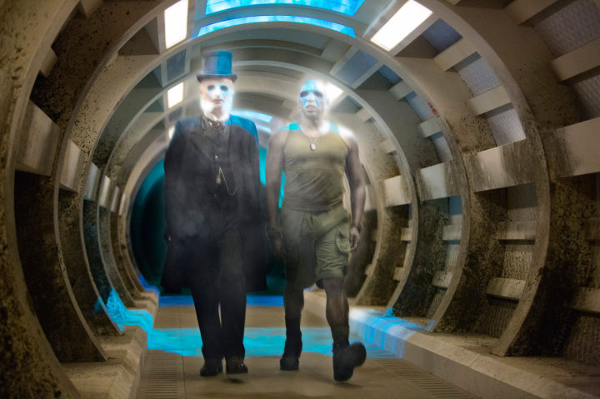 On the surface (*rimshot*), Under The Lake would appear to be a fairly standard “base under siege” Doctor Who episode. Certainly all of the cliched elements are here. A remote location? An unknown menace? A cast of ineffectual scientists, hardened soldiers and one weaselly middle-manager more concerned with profits than lives? The only reason you can’t call this story an Aliens rip-off with ghosts instead of aliens is that this sort of story was old-hat for Whovians back in the 1960s.

Thankfully, Under The Lake proves smarter than that. Writer Toby Whithouse throws enough curves into the script that most of the cliches of the genre are defied. The base commander being hearing-impaired, for instance, is a brilliant conceit that sets up one of the funnier moments of the episode and establishes a fascinating bit of trivia for the long-time fans. And the skillful direction by Daniel O’Hara keeps the story moving along at a brisk pace.

The only real flaw to the episode is that it proves too self-aware at times. While The Doctor has been through similar situations before, it seems a bit glib, even for The Capaldi Doctor, to run down a list of problems and then ask if there’s any other issues he should know about that could prove inconvenient at the worst possible moment. And the gag about The Doctor having flash cards for his most frequently needed apologies went a step too far in this critic’s opinion. Nevertheless, there is more good than bad in this episode.