Raised by the people of the forest following the crash of her parents’ airplane deep in the Amazon jungle, a young girl was trained in the ways of the shaman, the hunter and the warrior. The forest people had an ancient prophecy which spoke of a girl from the sky. It said that she would grow into their greatest champion and a guardian of Mother Forest – The Sheena Matayana!

What nobody knew was that Sheena was also Rachel Cadwell – the lost heir to the Cadwell Industries empire. Coincidentally, this was the company most responsible for the destruction of the lands that Sheena sought to protect. And her grandfather was the man who had done the most to prop up the corrupt banana republic that ruled Val Verde!

After being discovered and having the truth of her parentage revealed, she was “rescued” from a life of savagery. Now, Sheena plays a dangerous game, camouflaging herself like many of the jungle’s predators. She masks herself as one of Val Verde’s idle rich elite – a pampered princess from a powerful family, fallen into decadence after her return to civilization. But in her heart, she is still Sheena. And she continues to fight in secret against her grandfather’s businesses and anyone else who would hurt Mother Forest.

It is during one of these battles, fighting to protect the site of a sacred temple, that tragedy strikes. A dam is blown up by a team of workers and the resulting flood destroys all that Sheena has fought to save. Worse yet, something inside the temple is awoken and Sheena quickly finds herself on what her legends call “the path without boundary”.

Once her head clears, Sheena finds herself in a forest unlike her own. Her scouting reveals a primitive house in the trees… and a letter that records the year as 1936! More, there is a young ape who seems to have come to the house seeking help… and another group of industrial workers destroying the forest.

And what of the master of the strange tree house? He is half a world away in London. And he is engaged in his own strange quest…

Lords Of The Jungle #1 proved to be a disappointment.  Hopes were high, given early interviews in which author Corinna Bechko spoke about her love of Tarzan as a character. More, she spoke of her commitment to making sure the story was true to the spirit of Edgar Rice Burroughs’ original stories.

Unfortunately, Tarzan doesn’t show up until the final page of this issue and there’s no indication just what his role in the story is! It’s something of a problem in a six-issue mini-series when one of the co-stars is AWOL for a large portion of the story and the basic plot is already feeling padded out after one issue. Thankfully, Bechko does have a handle on the modernized Sheena’s character, though it is somewhat troubling that this story – which is meant to put Tarzan and Sheena on equal footing – opens with Sheena failing in her mission and seeing everything she’s fought to protect destroyed. 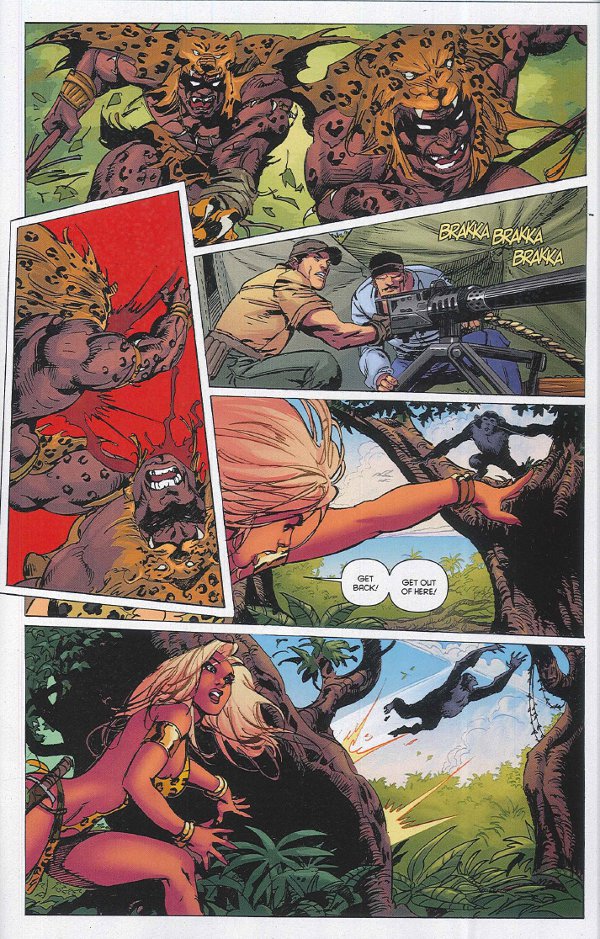 A larger problem is the artwork of Roberto Castro. Castro is a terrible fight choreographer and every single moment of action in this issue seems forced and posed. Castro also seems incapable of maintaining a consistent visual continuity.

A prime example of this is Sheena’s costume, which switches from being a one-piece leotard to a bikini and back throughout the issue. Castro also can’t decide if Sheena’s costume leaves her back bare or if there is a support-strap running horizontally along her back. Castro had similar issues last year in Red Sonja/Conan, where he frequently depicted Red Sonja wearing metallic pasties, the straps of her chain-mail bra having mysteriously vanished! Ironically, the only positive thing that can be said for Castro as an artist is that he doesn’t indulge in gratuitous fan service.

Lords Of The Jungle may be notable as the first official team-up between Tarzan and Sheena. Unfortunately, that’s the only notable thing about this book. Save perhaps how notably disappointing it is on every single creative front.