The year is 2016 and we have reached peak superhero movie. I’m not talking about superhero fatigue or exhaustion, though it may certainly feel overwhelming to some. But with Captain America: Civil War, Marvel Studios has come as close as anyone to recreating the thrills and drama of a major superhero comic book event for the big screen.

This isn’t necessarily too shocking – after all, Marvel did create the blueprint for this kind of movie with 2012’s The Avengers, where characters from across a shared universe united to save the world. In Avengers: Age of Ultron, Marvel hoped lightening would strike twice, but even returning writer/director Joss Whedon couldn’t deliver quite the same experience. Not that Age of Ultron was a flop, far from it in fact, but what could have a been a truly stellar sequel was weighed downed by the very universe-building that was such a boon for The Avengers.

Civil War, however, isn’t an Avengers film – yes, it stars just about every Avenger minus Thor and Hulk, but it is still very much a Captain America movie. Steve Rogers’ relationships with his fellow Avengers as well as the themes of previous Cap films (especially The Winter Soldier) all form this film’s through line. Still, though technically not an Avengers film, Civil War assembles more heroes than any previous Marvel film and balances them more effectively than any superhero ensemble outside of animation. 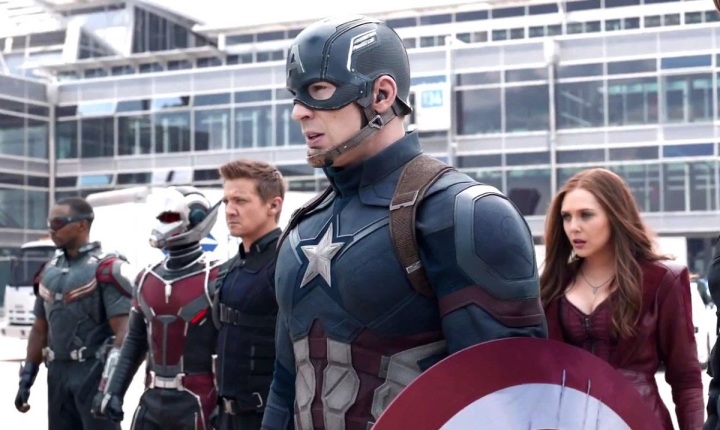 After an opening flashback in where we see Bucky Barnes during his time as HYDRA’s puppet, Civil War returns us to the present, roughly a year after the events in Sokovia. What happened there during Ultron’s attack was a turning point in how the world views enhanced people – the Avengers in particular. Matters are only made worse when on a mission in Nigeria, Scarlet Witch accidentally blasts a hole in the side of an office building, killing aid workers from Wakanda.

In response, the United Nations intends to create an international governing body to oversee all future Avengers activity. This proposal doesn’t sit well with Steve, who sees it as a way to pass their culpability on to a committee, and one that will likely have agendas of its own which won’t always align with theirs. Tony Stark, however, is all for it. Wracked with guilt over the Ultron incident, Tony believes the Avengers need to be held accountable for their actions, that they need to answer to someone when they screw up.

It’s along these lines that the Avengers split – Falcon and Scarlet Witch siding with Cap, while War Machine, Black Widow, and Vision side with Iron Man. And when Bucky is framed for a terrorist attack, an all-point bulletin is put out for The Winter Soldier, sending Wakanda’s finest warrior, Black Panther, Cap, and Iron Man on a chase to find Bucky first.

Considering that Captain America: The Winter Solider stills stands as the most flawlessly executed Marvel movie, it should come as no surprise that the Russo brothers, along with screenwriters Markus and McFeely, turn in another tightly structured adventure, full of action and heart. And though Civil War doesn’t quite reach the pinnacle of The Winter Soldier, it’s easily the best movie starring Cap, Iron Man, Black Widow, and the rest of the Avengers to date. (Okay, so maybe this really is an Avengers movie.)

There’s no denying that a huge reason Civil War works so tremendously well is that Marvel has had several movies to build these characters, along with the rapport they share and the beliefs they hold. By the time we reach Civil War, the fact that it’s the typically reckless Tony Stark schilling for government oversight, while the straight-laced, by-the-book Steve Rogers is going rogue is an extremely rewarding development. Their viewpoints have basically swapped since the Battle of New York, yet the change of heart feels entirely earned given these characters’ respective arcs over their many films.

Both Chris Evans and Robert Downey Jr. wear their roles comfortably. As I’ve already mentioned, Steve’s actions are the driving force in the film, and Evans easily expresses Steve’s struggle in balancing his duty with his devotion to his childhood friend. However, Steve and Tony have also built a strong partnership, and that too is tested in surprising ways. And again, though Civil War is a Captain America film first and foremost, Downey gets to deliver some of his best work to date as Tony with an unexpected emotionally-charged arc.

With a film stuffed to the gills with characters, it’s a feat unto itself that Civil Wars gives everyone something meaningful to contribute. Along with introducing the MCU’s Black Panther and Spider-Man – both of whom are outstanding, especially Chadwick Boseman’s T’Challa – the film gathers additional characters as the plot progresses, like Ant-Man and Hawkeye. And it’s here in this pitch perfect use of their ensemble that Civil War so fully resembles the superhero world you find in comic books. When Ant-Man appears and he and Falcon share a bit of dialogue referencing their last encounter, I half expected text from an editor to appear in a tiny box telling me to check out Ant-Man issue whatever to find out more. Even the arrival of Tom Holland’s Peter Parker – a brand new character for the MCU and a brand new actor in the role – somehow feels established, as if, yeah, this Spidey has been here all along, we simply hadn’t seen him in action yet.

And speaking of the action, it is spectacular. Throughout the film there are several big set pieces, ranging from an intense street chase to an all out superhero brawl. There are moments that impress with their technique and skill and others that do so through pure spectacle. And in that giant brawl, the combination of powers and abilities lends itself to some of the most ambitious superhero fighting ever put to screen. Occasionally, the shaky cam becomes a bit much, and mostly because it detracts from the fight choreography, but what’s important is kept in focus. (To gush for just a moment, there is nothing more satisfying than watching Black Widow beat down numerous dudes double her size. Scarlet Johansson and her stunt team make it look effortless.)

There is fault to be found in Civil War, surely, and perhaps on a second viewing I’ll find problems. But outside of a weird decision to label every city visited with gigantic text that fills the screen (seriously, it’s like the movie is screaming locations at you) it’s hard to pinpoint an element that doesn’t work. For example, that pesky villain problem all Marvel movies have had? That’s not the case here, and saying any more would spoil the reveal.

The future of the MCU looks very bright in the hands of the Russos, with Captain America: Civil War setting a new blueprint for the films that follow.