A dead mother. An accused father. A grieving child.

It’s a scene that’s hauntingly familiar to forensic investigator Barry Allen. His mother was killed and his father wrongly convicted in a rushed case. This inspired young Barry to become a CSI while also making him meticulous about his work.

Normally that might be considered a good trait, but it hasn’t won Barry many friends in a police department more concerned with securing convictions than seeing justice done. Ironically, it was that drive to do what is right over what is expedient which transformed Barry Allen into The Flash as much as the bolt of lightning which gave him access to The Speed Force, making him The Fastest Man Alive!

The reminder of his own past isn’t the only thing haunting Barry Allen. He’s begun having visions – both of his past and his worst enemy, Professor Zoom, returning in search of revenge. He’s also seen a strange young man, vaguely familiar, clad in a yellow costume who speaks with urgency about him needing to remember.

It would be fair to say that The Flash Rebirth #1 hits the ground running. There’s no time wasted explaining Barry Allen’s origin story or personality. Everything you need to know about how Barry became The Flash and his personality as a hero is quickly summed up with a few panels, mirroring scenes we saw in DC Rebirth #1.

Between that recent issue and the popularity of The Flash television series on The CW Network, it’s a safe assumption that most of the people picking this comic up already know a bit about who The Flash is. What little exposition exists shows how things differ from both the TV show and The New 52 reality.

The biggest change is that in this reality Barry Allen was able to prove his father’s innocence. And rather than having died in prison, Dr. Henry Allen is alive and well to dispense fatherly wisdom to his superheroic son. Mention is made of STAR Labs having done experiments on The Flash, but there’s nothing to suggest he has a chummy relationship with the scientists there.

Joshua Williamson’s script is to be praised for its economy of motion. He takes care to introduce Barry as a character yet also moves past the scenes taken from DC Rebirth #1 as quickly as possible while also finding time for a few novel touches. For instance, I can’t recall anyone allowing Bruce Wayne and Barry Allen – both men who lost their families to violence and were inspired to become investigators of some kind as a result – to bond in the way they do here. 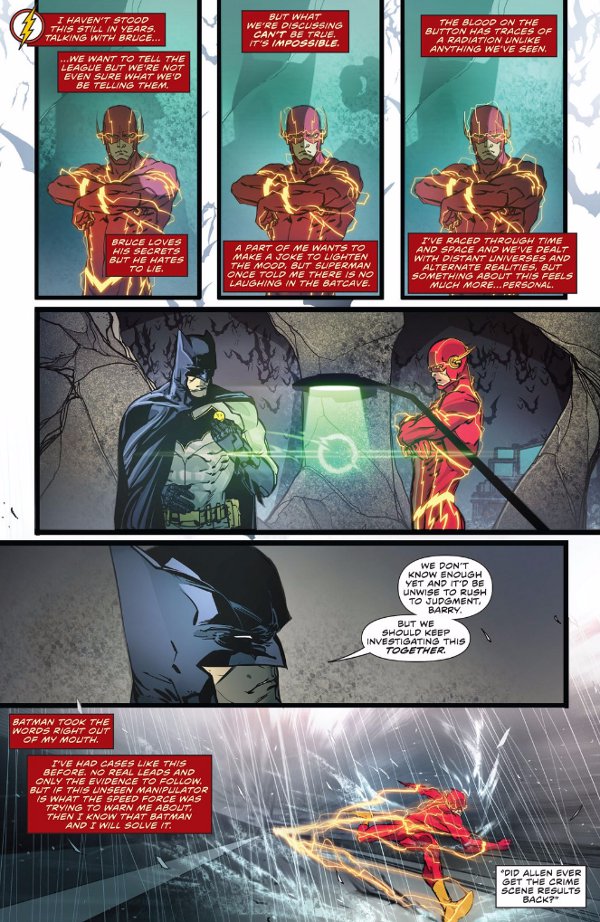 That same sense of continual motion exists in the artwork. Carmine Di Gianodmenico’s design proves striking, with The Flash is continually covered in lightning and Barry seeming to throw off sparks even when he’s standing still. The colors by Ivan Plascensia are well chosen, with oddly muted tones utilized for the backgrounds so that Barry stands out all the more in his bright suit when he’s in action.  The lettering by Steve Wands is crisp and clear.

Longtime fans of The Flash will be pleased by this issue. Readers following the continuing mystery first revealed in DC Rebirth #1 will want to pick up this issue in order to see the latest clues. And those fans of the TV Series looking for a good entry point into the world of the comics couldn’t ask for a better first issue than this one.