Doreen Green (a.k.a. The Unbeatable Squirrel Girl) is in the mood for love! But it’s so hard to meet people when you’re a full-time college student and a full-time superhero. Well, people who aren’t criminals or other superheroes. And all the good superheroes around Doreen’s age are spoken for.

Urged by her friends to try a personal ad, Doreen has one disastrous date after another.  The best one was a Sentinel who, despite never having been programmed for romance (or basic human empathy) still managed to be less of a jerk than all of the human boys her age. The worst one was her latest date – a conspiracy theorist who refuses to believe superpowers are real, despite having lived in Manhattan his whole life and having survived several alien invasions and super-villain attacks.

Honestly, it was a relief when The Mole Man showed up, took the jerk hostage and started delivering a monologue about the evils of the surface world and how Squirrel Girl had wronged him. Getting people in outrageous costumes with phenomenal powers to listen to reason is as much a power for Doreen as her squirrel agility, fluffy tail and ability to talk to squirrels. And she finds shouting world-conquerors far easier to deal with than a “superhero truther”.

There’s just one problem. Doreen does such a fantastic job of talking Mole Man down that he becomes quite smitten with the young lady. And faster than you can say “emergency engagement ring saved for just such an unlikely emergency”, the wrinkly old devil is ready to propose marriage.   Eek. 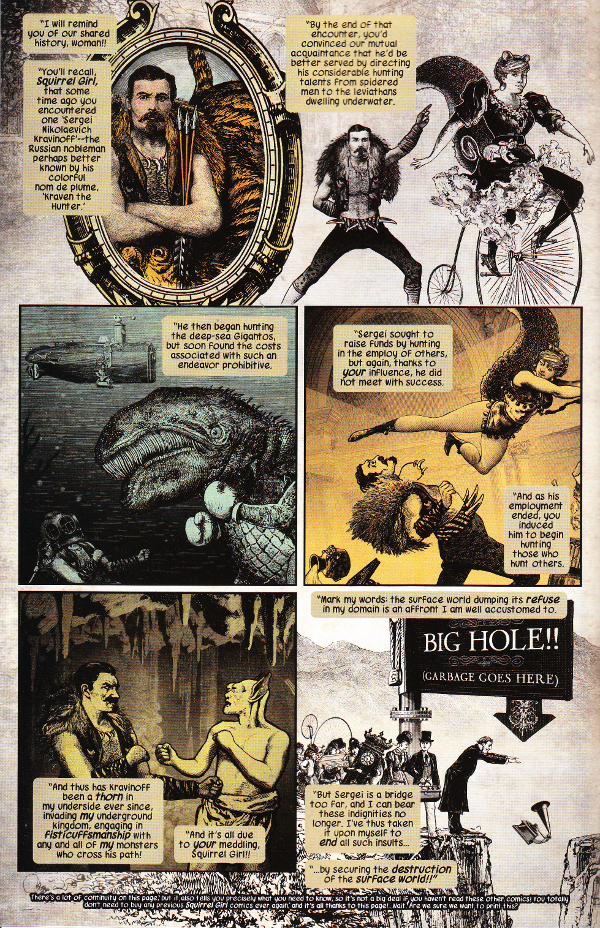 There is much to admire about Unbeatable Squirrel Girl as a series and this issue showcases the many reasons why this is my favorite Marvel Comics title.  And no, it’s not because it isn’t being forced to derail its on-going plot to take part in Civil War II.  Well, not JUST that…

Ryan North is a funny writer. He has hilarious ideas and he writes good dialogue, which gives every character a distinctive voice. More importantly, he clearly cares about The Marvel Universe as a setting and no matter how silly a plot-line may become he remains true to the core concept of the characters. Hence Mole Man’s ire being aroused because of a previous issue where Squirrel Girl befriended Kraven The Hunter and convinced him to prove his skills by hunting dangerous giant monsters instead of people.

North brilliantly explains all this in a single page, with artwork by guest artist David Malki depicting the events in the style of early 20th century photographs. Because Mole Man is so old, you see? This is another wonderful about this book – how it handles exposition in an artful way that ads to the humor of the issue, with Pratchettesque footnotes at the bottom of some pages. This perfect union between art and story further adds to the unique tone of Unbeatable Squirrel Girl. Erica Henderson – the series’ regular artist – boasts an exaggerated style that well-suits the cartoonish humor of North’s scripts. Further enrichment is provided by a team of rotating guest artists, who provide the artwork for one of the series’ best running gags – The Deadpool Guide To Super Villains flashcards. Honestly, I’m amazed some enterprising marketing weasel at the corporate office hasn’t suggested making the set a reality, because the entries – written by Deadpool himself – are as hilarious as they are informative. Shocking, I know!

If you haven’t been reading The Unbeatable Squirrel Girl, you should rectify that mistake immediately. This is one book that, like its eponymous heroine, can’t be beat.  Seriously, it’s right there in the title!