[WARNING: The following review will contain SPOILERS for both The Killing Joke graphic novel and the animated film.]

Normally when I write a review of something I start with a brief summary of the story. I’m avoiding that in this case for two reasons. The first is that the original graphic novel of Batman: The Killing Joke is so famous (and infamous) that I don’t think it requires any introduction. The other is that there are several points regarding the original graphic novel and this film adaptation that I feel should be addressed before discussing the film itself.

To call The Killing Joke polarizing would be an understatement! The book has a devout following of Bat-fans, who number it among the greatest Batman stories of all time. Other fans of the book are devotees of writer Alan Moore and/or artist Brian Bolland. Conversely, The Killing Joke also has a large number of detractors. Some of them are Joker enthusiasts who resist any attempt to give The Clown Prince of Crime an origin story, however indefinite it may be. Others are fans of Barbara Gordon, who dislike the story for its harsh, and indeed misogynistic, treatment of the character. 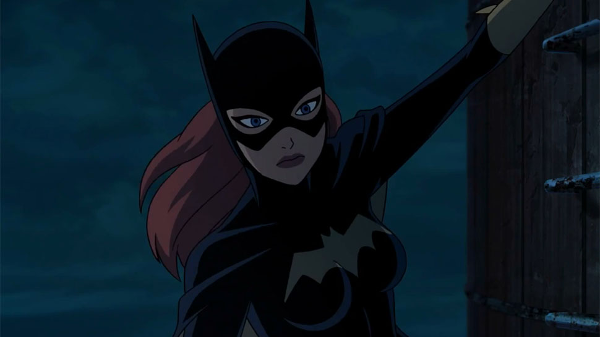 Love it or hate it, it cannot be denied that the fate of Barbara Gordon was not a priority for those involved in creating The Killing Joke. She appears in only six pages of the story, including the ones depicting her nude body. She has dialogue on only three pages. Only a single page is devoted toward discussing her welfare after The Joker’s attack.

Ironically, the only person involved in the book who seemed to show any concern for Barbara was the writer himself, Alan Moore. In a 2006 interview with Wire Magazine, Moore related that when he asked editor Len Wein if they had any issues with him permanently paralyzing Barbara Gordon, Wein’s response was ‘Yeah, okay, cripple the bitch.’ Moore further noted that he’s come to view the story as flawed in several respects and that he now considers The Killing Joke to be“one of the worst things I’ve ever written.”

Unfortunately, The Killing Joke film shows that Bruce Timm and writer Brian Azzarello do not understand who Barbara Gordon is as a character.

The Killing Joke movie seems like two separate films spliced together badly. The first part details Barbara Gordon’s last adventure as Batgirl before deciding to hang up her cowl. A would be crime boss named Paris “Perry” Franz becomes obsessed with Batgirl and starts romancing her in his own disturbed way. Batman tries to order Batgirl off the case but she’ll have none of it, accusing him of not thinking her capable of dealing with Paris on her own.

The damnable part is that Batman is proven right. Batgirl displays none of the intelligence the character is famous for in the comics and only Batman’s intervention saves Barbara from certain death or rape. This leads to a scene where Batman says that they are not equals and that Barbara has yet to reach “the abyss… where all hope dies.” This proves ironic given that the end of the film has the same morose Batman hopefully pleading with The Joker to make an honest go at redemption so they can avoid killing each other. But I digress.

This sort of bland sexism is par for the course for Brian Azzarello. Much of his previous work is also known for glamorizing criminals and the script for The Killing Joke spends more time fleshing out Paris Franz and his gang than Barbara Gordon. Barbara is portrayed as a stock chick-flick heroine, complete with a stereotypical gay co-worker who serves no purpose other than to dish with Barbara about the “strict yoga instructor” she kinda sorta has a relationship with… but no sex!

On that note, I should probably say something about the now infamous sex scene between Batman and Batgirl. Yet I have little to say, save that it comes about during a fight that is nearly as cliched as Barbara’s gay co-worker and that it got the loudest laugh of the night at the advance screening where I saw the movie.

The second half of the movie is a surprisingly dull adaptation of the original Killing Joke. Azarello tries to punch it up with “edgy” dialogue but the effort falls flat. For instance, The Joker now describes the dilapidated carnival he’s purchasing as smelling like piss and speculating as to whether it’s rat piss or hobo piss, rather than simply saying it was used as a toilet. Because saying piss is funny! Azzraello also adds dialogue to the numerous silent sequences – such as Batman’s approaching The Joker’s cell – in an effort to make-up for the fact that Batman is surprisingly absent from most of the comic and doesn’t say much even when the focus is on him.

The animation is similarly lackluster. Reportedly some effort was made to craft a hybrid between Brian Bolland’s distinctive style and something more friendly to traditional animation. Unfortunately, the final result is shockingly inconsistent for a Warner Animation production.

Various key images are rendered in total accuracy to Bolland’s vision but these moments conflict with the rest of the animation, which looks similar to the style used for the Young Justice TV show. And the effect falls completely flat when the monochromatic filter applied to the flashback sequences depicting Joker’s possible past drains all the life and color from the infamous first glimpse of the transformed Joker  – now rendered in dull black and white rather than garish purple and green.

I must praise the voice actors for giving it their all. Unsurprisingly, Mark Hamill steals the show as The Joker but that’s hardly a challenge. He is, after all, given a big showy musical number. Yet even that seems oddly lifeless and sedately paced.

Even with the added dialogue Kevin Conroy is given little to do and has no real chance to emote before the final scene. Ray Wise is similarly hampered in his role as Commissioner Gordon, having nothing to do beyond grunting in a terrified manner. And Tara Strong gives it her all as Batgirl, for all the good it does her.

So how do I rate The Killing Joke in the final analysis?

As an adaptation of the original comic, it’s poor. The animation doesn’t capture the grandeur of Brian Bolland’s artwork and is grossly off-model judged independently. Azzarello’s additions to the script eliminate any sense of subtlety in the scenes where Alan Moore trusted the art to tell the story without dialogue.

As an independent work, it’s even worse. I wouldn’t have thought it possible to make The Killing Joke even more misogynistic in its treatment of Barbara Gordon than the original story. And yet, here it is. One almost has to admire Azzarello for this triumph of sexism and stupidity!

I’m giving this film a single star. Partly because the voice acting is as good as it can be. And partly because the conclusion of this film will, with any luck, finally put an end to Grant Morrison insisting that the story ends with Batman strangling The Joker, despite Alan Moore and Brian Bolland saying otherwise.

One thought on “BATMAN: THE KILLING JOKE [Review]”