The biggest problem Kara Zor-El has always faced as a character has been standing apart from her cousin. Rarely has Supergirl ever been presented as something besides “Superman, if he were a girl.” As such, I appreciated the idea behind the new Kara Zor-El presented in the New 52 Supergirl series, though the execution was often lacking.

This Supergirl, far from being an ever-cheerful girl-next-door, was a reluctant hero. She was resentful about being sent to a backwater planet against her will and being expected to protect an ungrateful humanity. This was somewhat justifiable, given that her first exposure to Earth culture was the Russian army trying to kill her and her cousin was less than sympathetic to her desire for a life outside of saving the world. Kara’s outrage over her circumstances was such that she eventually became a Red Lantern. Then somewhere along the line she lost her powers completely.

That leads us into Supergirl Rebirth #1 and the new status quo. Unsurprisingly, given the popularity of the Supergirl television show, the Rebirth series is drawing in some of the mythology of the TV show in an effort to make the comic accessible to those fans. Thus we are presented with Supergirl as an agent for the D.E.O. – Department of Extra-normal Operations. In exchange for their help in restoring her powers, Kara agrees to aid the D.E.O. in dealing with violent alien and metahuman threats. She also agrees to work deep cover as the daughter of D.E.O. agents Jeremiah and Eliza Danvers, who hope to help Kara acclimate herself to her new home-world.

Oddly, this explanation doesn’t come until the later part of the issue. The book opens in the heart of the action, with Kara about to be shot into the heart of Earth’s sun on an experimental ship. Unfortunately, a side-effect of the ship’s launch opens a portal to The Phantom Zone and releases Lar-On – an unfortunate victim of Red Kryptonite poisoning, whose particular infection transformed him into a savage wolf-man.

Steve Orlando’s script is structured strangely but skilfully written. He has a clear grasp on Kara’s character and while there’s some hint of the snarky teenage girl we saw in the New 52 Supergirl series, there is also a sense of the classic take on Kara as well. This Supergirl’s greatest strength is her compassionate heart, which is as it should be. The supporting cast are rather bland thus far, with the most definition being given to D.E.O. commander Cameron Chase and even then she is only defined as the typical hard-ass, by-the-book boss-type. 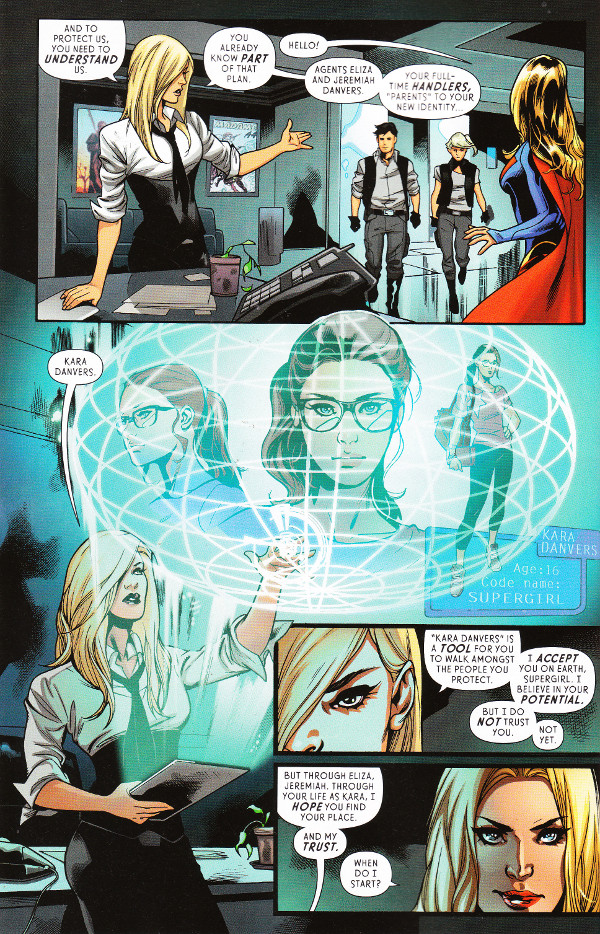 The artwork for this issue is largely gorgeous. I’ve enjoyed Emanuella Lupacchino’s previous work on World’s Finest and the digital Adventures of Supergirl series, where she proved quite skilled at drawing strong, beautiful women with realistic proportions. The color art by Michael Atiyeh is wonderfully applied, with appropriate palettes throughout. Unfortunately, there are several points where the inks of Ray McCarthy serve to obscure the action rather than enhancing it.

In the final analysis, this new Supergirl series is serviceable but not outstanding. The artwork is good, despite a few minor hiccups. The story isn’t bad, though the structure is weird and the cast apart from Kara aren’t memorable at all. Still, this is a good enough base that something better might be built upon its foundation.