The Thundercats and The Masters Of The Universe are the protectors of their respective worlds. Both are made up of powerful champions devoted to the protection of the innocent and the battle against evil. Yet these heroes have never crossed paths… until now!

For years, the sorcerer Mumm-Ra has sought to destroy The Thundercats. Until now, his dark masters – The Ancient Spirits of Evil – had shown patience in waiting for Mumm-Ra to accomplish this task. That patience has reached its limits, however, inspiring them to seek out new avenues for destroying Third Earths’s greatest heroes.

Their answer lies on the mythical planet of Eternia – home of The Masters of The Universe and He-Man, The Most Powerful Man In The Universe. The Ancient Spirits of Evil believe that He-Man’s weapon – the fabled Sword of Power – may be the equal of the mystic Sword of Omens wielded by the Thundercats’ leader, Lion-O. They say that Mumm-Ra, equipped with The Sword of Power, should be able to finish off The Thundercats once and for all!

Reaching Eternia is easier said than done, however, and it takes all the dark powers of The Ancient Spirits of Evil to breach the spells that mask Eternia from the rest of the universe and bring the two worlds close together. This attracts the attention of both The Masters of The Universe and The Thundercats, who immediately set about exploring this strange celestial alignment and dealing with the astronomical damage caused by their planets’ proximity. 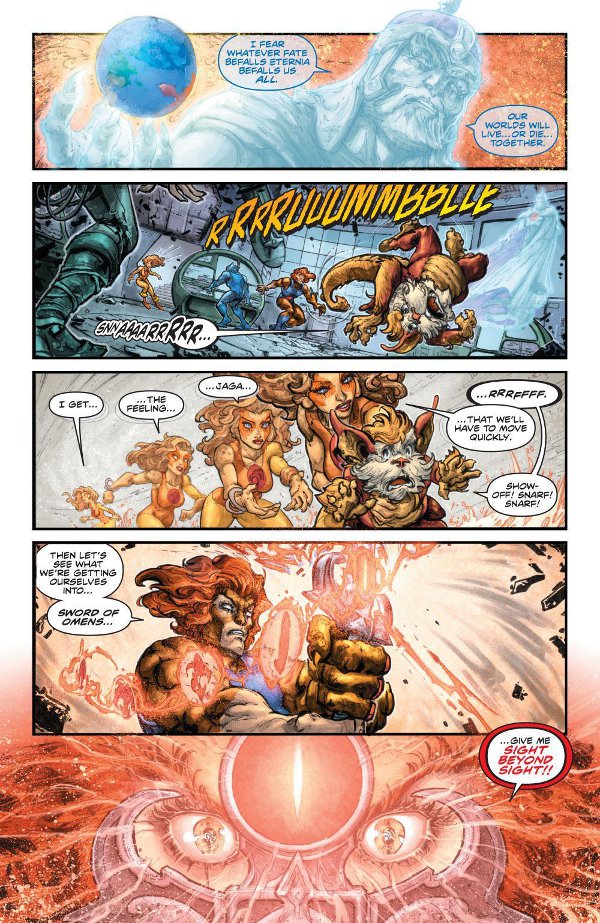 He-Man/Thundercats #1 is not likely to win any awards. Those who are not already familiar with the franchises will find the story entirely inaccessible, with most of the cast not being introduced by name. And the artwork is typical of Freddie E. Williams II’s overwrought style, with so much detailing you can’t see the forest for the trees.

Despite this, fans of both series will find this book a welcome slice of nostalgia.  The over-the-top style of the artwork suits both franchises well. The final product looks something like a grittier version of original cartoons, with vivid colors throughout.

The plot isn’t ground-breaking but it’s not like the original cartoons were all that complex either. The script by Rob David and Lloyd Goldfine does a good job of capturing the essence of the characters (despite it doing a poor job of introducing most of them) and there are a few novel touches that speak to their love of the characters. Chief among these is the unveiling of the issue’s narrator, which won’t be much of a surprise for most readers but will prove most gratifying on the final page.