The world at large thinks Oliver Queen is dead, his company and family fortune taken over by a ruthless CFO who framed him for murder before trying to kill him off. Oliver survived to fight another day, taking up his superheroic alter-ego of Green Arrow full-time until he could prove his innocence and reclaim what was his. Yet that goal seems to be drifting further and further away…

Thanks to the efforts of Merlyn The Dark Archer, most of the people Green Arrow fought to protect are now convinced he is a criminal and a killer. A corrupt executive who caters to the worst in people is a stone’s throw away from becoming Mayor of Seattle and declaring his own war upon The Emerald Outlaw. And a new gang armed with advanced military hardware – the so-called Vice Squad – menaces the criminal underworld, acting as judge, jury and executioner!

There are only two bright spots in all of this. The first is that Oliver Queen has found love and a partner in crimefighting in Dinah Lance a.k.a. The Black Canary. The other is that not all of Seattle’s police believe that Green Arrow has gone bad. All when stand together when The Vice Squad invades the city jail, intent on killing the prisoners and any cop who dares stand in the way of their War on Crime!

Police corruption and brutality is something of a hot topic in the news and Green Arrow, at its best, has always been a topical comic that tackled real-world issues with zeal if not subtlety. With the leader of The Vice Squad revealed in this issue as a crooked cop named Notting, I don’t think Benjamin Percy can be accused of subtlety. Yet this fits in perfectly with Percy’s efforts to redefine Oliver Queen as a modern-day Robin Hood – something no writer has truly done to date beyond writing the character a defender of the common man with a generally rebellious personality.

Thankfully, Percy is skillful enough as a writer to move beyond simple platitudes such as “crooked cops are bad and we should not tolerate them!” Action fans will be satisfied by the thrilling chases and battles that make up the brunt of this issue. Moralists will be pleased to note that the good police officers are given a role in this story and the bad cops are portrayed as the exception rather than the rule. And unlike most writers who have paired Green Arrow and Black Canary in the modern era, Percy presents theirs as a partnership of equals, with Black Canary proving just as capable in a fight as Green Arrow. The romantic moments between the two are also enjoyable. 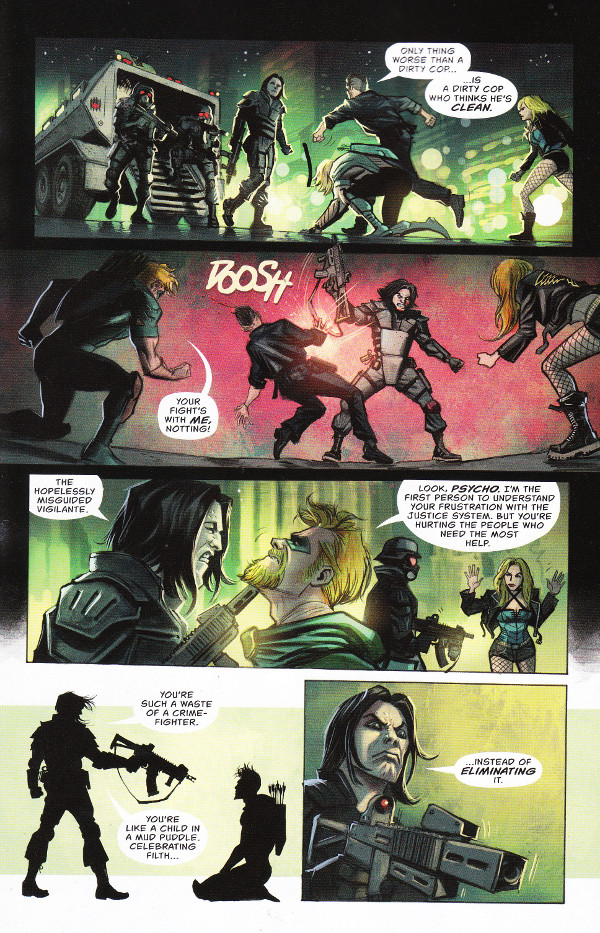 All of this is ably illustrated by the amazing Juan Ferreyra. Most of this action of this issue is depicted through a series of glorious two page spreads. While their styles as artists are not really comparable, I can’t help but be reminded of the glorious full-color extravaganzas that Bill Watterson used to craft for his Calvin and Hobbes Sunday comic strips. Like Watterson, Ferreyra does not waste a single bit of space and effectively switches the coloration to denote certain scenes, such as shifting to red-tints to denote impact or using silhouettes to emphasize certain panels.

If you haven’t ever read Green Arrow, this is a great time to start.