Ever since returning home to Gotham’s Burnside borough following a trip across East Asia, Barbara Gordon has felt off-balance. It goes beyond little things like her favorite coffee shop closing down. It’s even beyond big things like starting a new Masters program and moving out of her old apartment.

Everything seems to keep coming back to one man – Ethan Cobblepot. A bastard son of The Penguin who, thankfully, took after his mother in the looks department, Ethan is everything Babs likes in a man – brilliant, tech-savvy and, well, let’s face it, cute as a button. Unfortunately, Ethan’s tech start-up also seems to be behind every effort to use technology to gentrify Burnside – from a “help the homeless” app that makes the needy targets of human traffickers to a virtual pet game that mines the player’s device for personal information.

Barbara tried to give Ethan the benefit of the doubt, for all the good it did her. Now calling himself Blacksun, Ethan is using everything he’s built – and a high-tech vector suit – to destroy both his father’s criminal empire and Batgirl’s reputation as Burnside’s greatest defender. There’s one thing he hasn’t counted on, however – that the geek girl who he dumped via intern is secretly Batgirl. And that she’s as good with computers as she is martial arts. 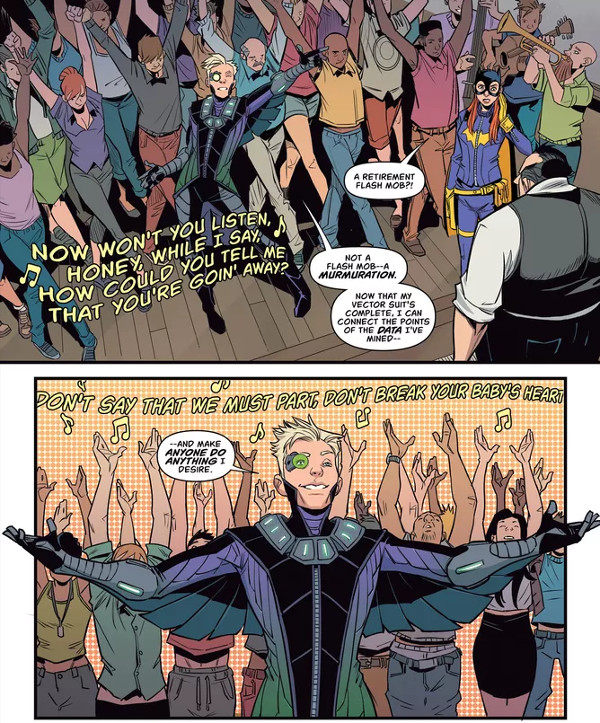 The Son Of The Penguin arc started strong but ended strangely in Batgirl #11. There’s nothing really wrong with Hope Larson’s script but the concept of Blacksun’s suit and technology-fueled mind-control based around data-mining seems a little too fantastic for a series that has stayed relatively rooted in slice-of-life realism. Ignoring that, the final battle between Barbara and Ethan is a frantic, thrilling one that showcase’s Barbara’s intelligence over her physical prowess.

Whatever quibbles I might have with the story, I have none about the artwork. Chris Wildgoose proves a perfect partner for Hope Larson visually, being equally capable of drawing a fast-paced chase scene and a quiet conversation between friends. Jon Lam’s inks find the perfect balance between merely outlining the artwork and shading it and Mat Lopes’ colors offer up the perfect finishes.

Despite some spotty science this month, Batgirl remains one of the best books to come out of the DC Universe Rebirth. Hope Larson has brought Barbara Gordon back to her former glory and Chris Wildgoose has given the book a truly unique look. If you like good books with smart, strong heroines, you should be reading Batgirl.