Once, Oliver Queen was shipwrecked and presumed dead to the world. He was reborn as someone else, discovering a natural talent for hunting and survival that emerged when the pampered playboy was forced to truly struggle to live for the first time in his privileged life. When he returned to civilization, he sought to defend his home city of Seattle as a costumed crime fighter – The Green Arrow!

Recently, having been framed for murder and left for dead, Oliver Queen was reborn again – this time as a warrior for justice who focused his eagle eyes upon those who would prey on the weak. He found love and kinship with another hunter at heart – the Bird of Prey called Black Canary.

Together, they uncovered a twisted truth – that one criminal syndicate was behind every evil act in the city. Known as The Ninth Circle, they had been using Oliver Queen’s businesses as a cover for their activities! Now, with the additional discovery a dark prophecy which speaks of a Queen being required to bring about the ruin or renewal of The Ninth Circle and venture capitalists out to turn Seattle into the nation’s first privately funded municipality, how can Green Arrow save his city? 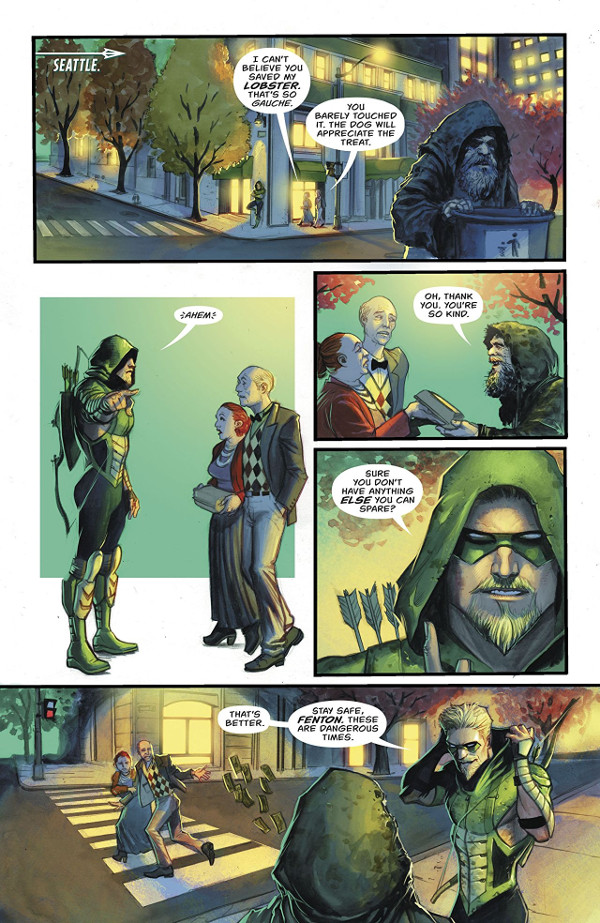 The final chapter of The Rise Of Star City isn’t much of a finale. The story is largely concerned with exposition, finally explaining The Ninth Circle’s ultimate goals beyond making as much money as possible off of the suffering of the innocent. Strangely, the whole issue feels rushed despite most of it being devoted to unfurling The Queen Prophecy and the secret history of Oliver’s family. Well, the OTHER secret history, assuming everything involving The Outsiders from Jeff Lemire’s run is still canon.

I can’t fault Benjamin Percy too much for this. He had an uphill battle trying to build a cohesive continuity from the shipwreck that was The New 52 Green Arrow series. I don’t think anyone could have taken the disparate parts of the various runs and forged something that wholly evoked the spirit of Dennis O’Neil and Mike Grell while restoring the history and relationships of Oliver Queen, Dinah Lance and Roy Harper. In this regard, however, Percy has been wildly successful. Whatever problems exist within the plot and pacing, he has nailed the personalities of these characters.

I can also wholeheartedly praise the artwork of Juan Ferreyra. I regret that most of the art in this issue is spread across two pages, with Ferreyra taking full advantage of the space allowed him and defying traditional panel structure. The one sample page I have to show does little justice to Ferreyra’s skill and to reduce these two-page spreads to a size that easily fits upon a webpage would be a crime.

Green Arrow #24 is something of a disappointment. Despite Benjamin Percy rushing this issue to its conclusion, there’s no payoff or resolution to speak of. Juan Ferreyra’s artwork remains excellent but can only do so much to dress up this lifeless ending.