[SPOILER WARNING: The following review does contain spoilers for the novel American Gods as well as the earlier episodes of the TV series American Gods.]

Since being released from prison, Shadow Moon has seen many amazing things. He’s seen a man pull gold coins out of thin air. He’s seen the moon plucked from the heavens. He’s even seen his own wife, Laura, come back from the dead.

Yes, Shadow Moon has seen many amazing things… but he hasn’t really believed any of them. There’s an even longer list of things Shadow Moon doesn’t believe.

Currently, Shadow is not believing that he and Mr. Wednesday are sitting in the cobweb-filled shop of a man named Nancy, who is making them both new suits. Shadow doesn’t believe that they need to look their best to meet another old friend of Mr. Wednesday’s in Kentucky, as she is throwing a big to-do for Easter. And while Shadow’s not aware that a lot of people are apparently upset about his working for Mr. Wednesday and that a lot of people are looking for him, including an increasingly decomposed Laura… well, he wouldn’t believe that even if he did know it!

Very soon, though, Shadow will find himself wondering just what he IS prepared to believe in…

The only real flaw with Come To Jesus is a flaw that existed in the original American Gods novel. By necessity as an Everyman character, Shadow Moon is a cypher and while the American Gods series did an admirably good job in developing Shadow beyond that in the early episodes, it cannot be denied that he has little to do here but be confused and annoyed while the more interesting god characters go about their business around him.

That being said, the god business is oh-so-good in this episode. If there is an award for casting directors, then Margery Simkin and Orly Sitowitz should get it. American Gods possesses what is easily the greatest ensemble since Legends of Tomorrow. No matter how brief their turns on screen, each member of the cast gives a performance that hits you with the power of a lighting bolt and the chemistry across the board is electric. 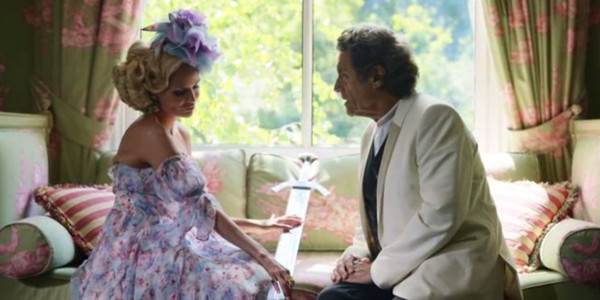 One note in the writing of this episode that I enjoyed is the parallel journeys of two fertility goddesses – Ostara and Bilquis. Ostara, played beautifully by Kristin Chenoweth, is doing quite well for herself, in theory. She proudly notes that the people still celebrate the coming of spring with rabbits and eggs though Odin is quick to point out that nobody is actually praying to her.

This is the opposite of the American experience of Bilquis (a.k.a. The Queen of Sheba, played by Yetide Bakadi). Eking out an existence by consuming one worshiper at a time, we see the orgies that once flourished in her name in flashback and how she continued to find power in the modern day until the free love movement of the 1970s suddenly demanded a price. The script brilliantly ties her arrival in America to the Islamic Revolution of Iran and deviates from the book in a respect that explains the character’s prominence on the show despite being a minor player in the novel.

That is the magic of American Gods. It has taken a novel with a fanatical following and found a way to relate its story while retelling it in such a way as to surprise its disciples with the retelling. Here’s hoping that Season Two remains just as surprising and inspiring.