I posed a question, in my review of the last issue of Conan The Slayer, that returned to my mind as I read this month’s offering – should I, as a critic, penalize an adapter for not improving upon the flaws of a work of fiction? To spin a metaphor that would likely appeal to Conan himself (though I doubt he knows the meaning of the word metaphor) can the smith be blamed that the steel is shoddy when the iron they are given is weak?

I seem to think about this a lot reading Dark Horse’s Conan comics. In the past I took Brian Wood to task for changes to the action of a story that served no purpose but to weaken Belit – Robert E. Howard’s famous Queen of The Black Coast – and paint her infamous though short-lived resurrection as the hallucination of an exhausted Conan rather than the final act of defiance of a she-devil even Hell could not contain when her love was threatened.

Given that, it seems unfair for me to criticize one adapter for mucking about with the intent of a story and not praising the one who stays true to the text as written. Thus my conclusion remains the same as last month. No, I can’t fault an adapter for remaining true to the spirit and text of a story… no matter how much we may wish they had tried to change things for the better. 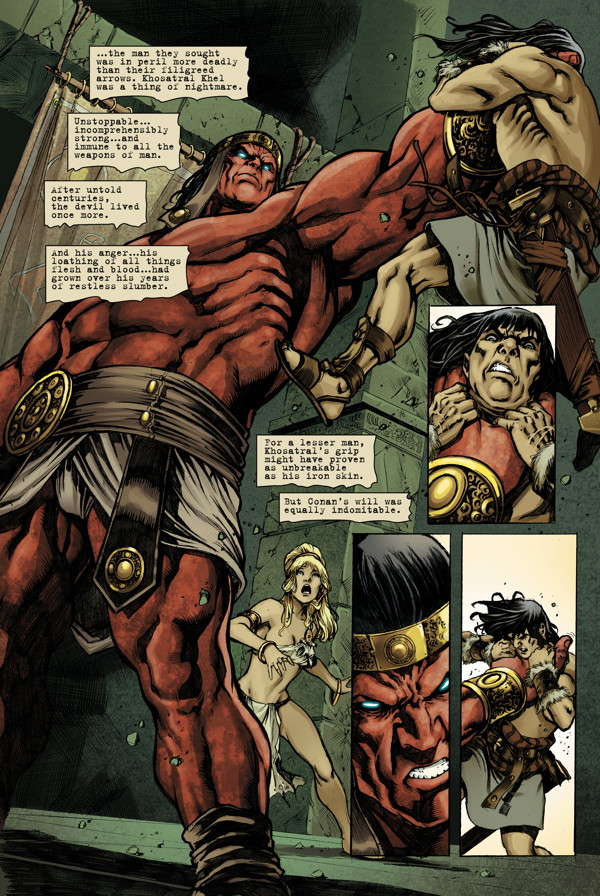 As I’ve noted before, The Devil in Iron is not a good story. Rife with the worst cliches of sword-and-sorcery fantasy (giant monsters, a lost city, a scantily-clad heroine whose chest-measurement is larger than her IQ, etc.), it’s clear even to those who aren’t Robert E. Howard scholars that this was not a story The Bard of Cross Plains agonized over for a long while before sending it off to his editor at Weird Tales.

This makes Conan The Slayer #10 something of an oddity. It is a good adaptation but a mediocre comic. Cullen Bunn’s script perfectly captures the spirit of the original Howard story but it lacks the wit of Bunn’s original Conan stories. There’s action aplenty but little more than that and none of the depth that usually informs both Howard’s and Bunn’s writing.

This malaise seems to have infected artist Sergio Davila as well. For the most part, Davila’s artwork is as gorgeous as ever, taken as the narrative flows. Individual panels, however, look somewhat off-kilter and one wonders if the artist was rushing to get this issue over and done with. Even Michael Atiyeh’s colors seem more sickly and off-model this month, with a sickly green tint that does little to enhance the finished artwork.

In the end, Conan The Slayer #10 is merely serviceable. Those who want to see Conan flight a giant monster while a buxom blonde screams and further imperils herself will not be disappointed. Those who have become accustomed to the deeper works Cullen Bunn and Sergio Davila created in the past will find themselves wishing for something different.