After a too-close encounter with The Truth Tortoise and a parody-friendly expy of a popular fantasy protagonist (whose creator, incidentally, is truly thrilled by the tribute and is not being sarcastic at all, thank you!), Morty has had enough. Exposed to the truth of all things after making eye-contact with The Truth Tortoise, Morty needs to forget what he’s experienced in order to stay sane.

Of course erasing memories is a simple matter when your grandfather is a super-genius scientist like Rick. Morty isn’t at all surprised when Rick doesn’t balk at his request to erase his mind.

What Morty doesn’t expect, however, is that Rick already has the equipment ready to go.

Heck, it hasn’t even had time to grow dust!

It turns out that this is far from the first time that Morty has encountered something so unpleasant that he had to have his traumatic memories erased. It may not even have been the first time this week!

Given the sort of craziness Morty is usually dragged into by Rick that he’s managed to cope with, the shenanigans that cause him to ask to have his mind tinkered with must be truly horrible!  One can only imagine the horrors that Morty has experienced.

Thankfully, we don’t have to imagine. Rick, for reasons that only make sense to him, has collected an archive of these tragic moments to enjoy watching from Morty’s perspective. He calls these moments “Morty Mind Blowers”.

Why? Eh. Something to do when there’s nothing good on TV. 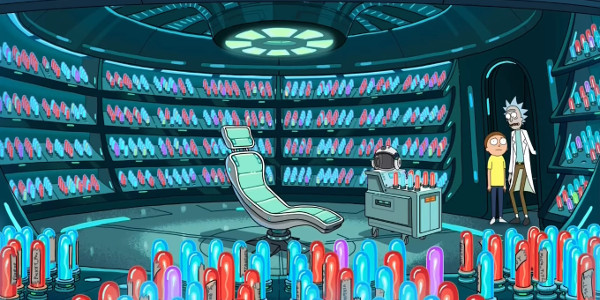 After the plot-driven heaviness that drove The Ricklantis Mixup, Morty’s Mind Blowers proves a welcome palette-cleanser. Presented in the same random clip-show format as the previous seasons’ Interdimensional Cable specials (a fact that Rick acknowledges gleefully), this episode offers up some brilliant parodies of classic movies like Contact and Ghost.

Some fans may quibble about some of the gags not making sense in relation to established character traits. One particularly funny bit has staunch athiest Rick shrugging at evidence of an actual afterlife, saying, “Well, silver lining. Now I know their religion is real.” Logic purists should remember the MST3K Mantra and that, when all else fails, it could just be a parallel timeline. All that matters on an episode like this is whether or not it is funny. and Morty’s Mind Blowers is incredibly funny.