Framed for murder and left for dead by the Satanic capitalist cabal known as The Ninth Circle, Oliver Queen has seen his home city of Seattle changed into something else. Now dubbed Star City, a new mayor in The Ninth Circle’s pocket has turned Seattle into the world’s first corporate-run municipality. Since then, it has become a playground for the idle rich and Hell on Earth for the little people under them.

In order to prove his alter ego’s innocence and stop The Ninth Circle from creating a constellation of their cities across America, Green Arrow hit the road. The hunt for The Ninth Circle’s secret bases led him to encounter several members of The Justice League, who offered their help after confirming that the once iconoclastic Green Arrow has truly changed.

The final leg of the quest brought Green Arrow and Green Lantern to The Ninth Circle’s secret spy-satellite base. Unfortunately, a drone attack has knocked Hal Jordan out for the count. Now, to save his city and the world, Oliver Queen must face the monster known only as Pain alone.

Back in Star City, Black Canary and Red Arrow have devoted themselves to fighting The Ninth Circle’s human-trafficking operation. In doing so, they discovered something miraculous. The woman who Oliver Queen was accused of killing was alive, now a captive of the slavers’ leader, The Auctioneer…

Green Arrow #31 brings the Hard-Traveling Hero saga to an epic conclusion. Otto Schmidt’s artwork looks fantastic throughout, perfectly capturing both the gritty underworld of Star City and the high-tech decadence of The Ninth Circle’s space-base. Schmidt’s use of color is also amazing, with his use of contrast being of particular note – the greens of our heroes clashing with the reds that dominate the decorating scheme of the villains.

Benjamin Percy understands Oliver Queen as few other writers do. While Green Arrow has been uniformly excellent since DC Rebirth began, the Hard-Traveling Hero story arc has done much to restore Green Arrow to his place in the pantheon of The World’s Finest Heroes. With this issue, Percy has not only confirmed that the weak-willed womanizer written by Judd Winick is deader than Disco – Percy has confirmed his status as the best Green Arrow monthly comic writer of the past twenty years. 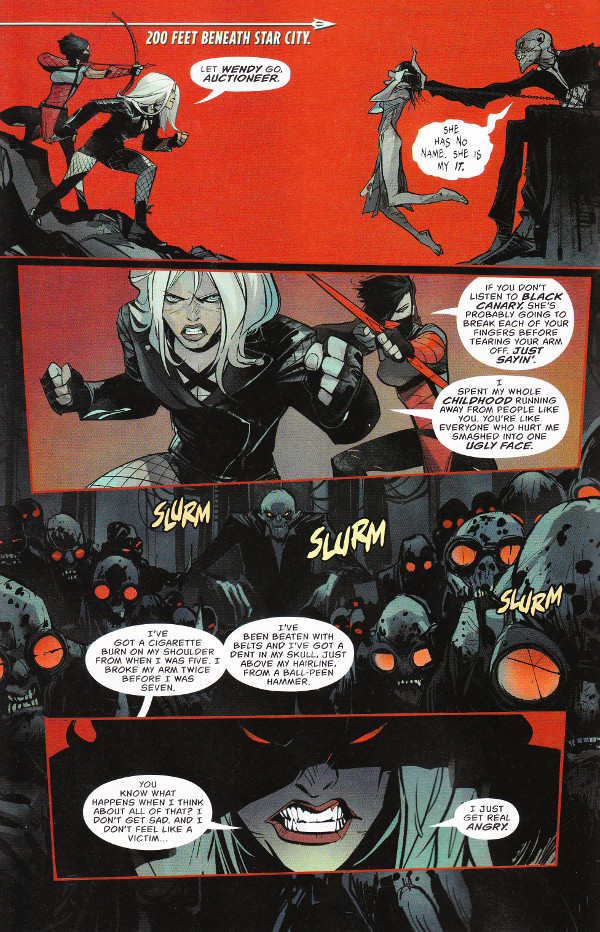 The issue is not completely without flaw, however. The Black Canary/Red Arrow sub-plot settles itself far too quickly. And the final pages’ connection to Dark Knights: Metal feels terribly forced. Yet despite these minor imperfections, Green Arrow #31 is a damn good book and it’s one you should be reading.