All around the universe, in different places and different times, something has awoken. Impossibly large white holes have begun to manifest, absorbing or annihilating everything unfortunate enough to encounter them.

The eleventh incarnation of the time-traveling immortal known as The Doctor is unaware of all of this, being focused on tracking a mysterious signal, with the help of his current traveling companion, library assistant Alice Obiefune. It is on the furthest edge of known space that the they discover a double impossibility – a literal edge of the universe (which is supposed to be infinite) and a featureless limbo encroaching upon that edge.

Pressing on into the void, The Doctor and Alice soon find themselves in another impossible situation. The Doctor quickly determines that they’ve crash landed on his home world of Gallifrey, during the time in which the first Time Lords began developing the TARDIS technology that would allow them to travel anywhere in time and space.

In order to get the parts he needs to repair his own TARDIS, The Doctor will have to aid his progenitors without arousing suspicion or getting too heavily involved. Of course The Eleventh Doctor is terrible at being subtle and not getting involved, leaving Alice to try and cover for them both… 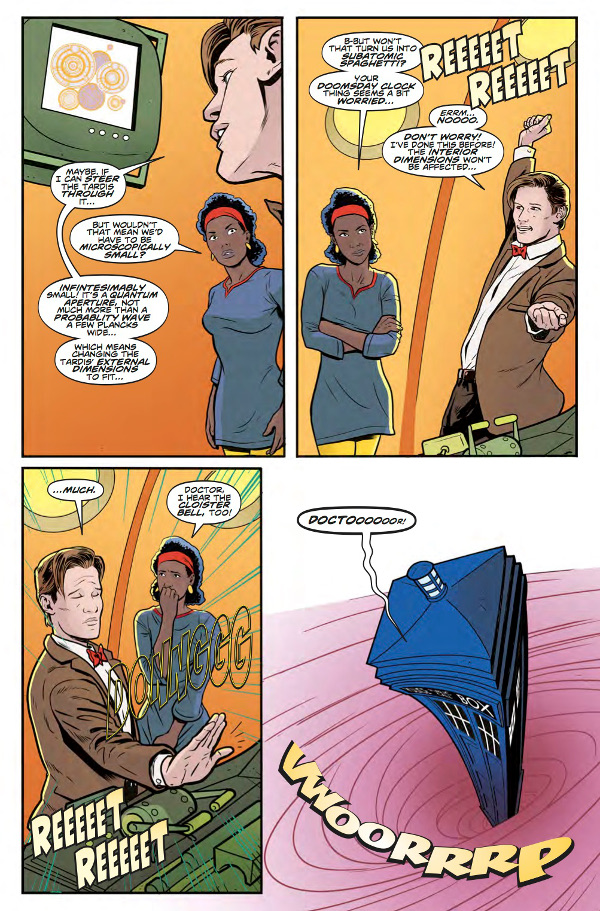 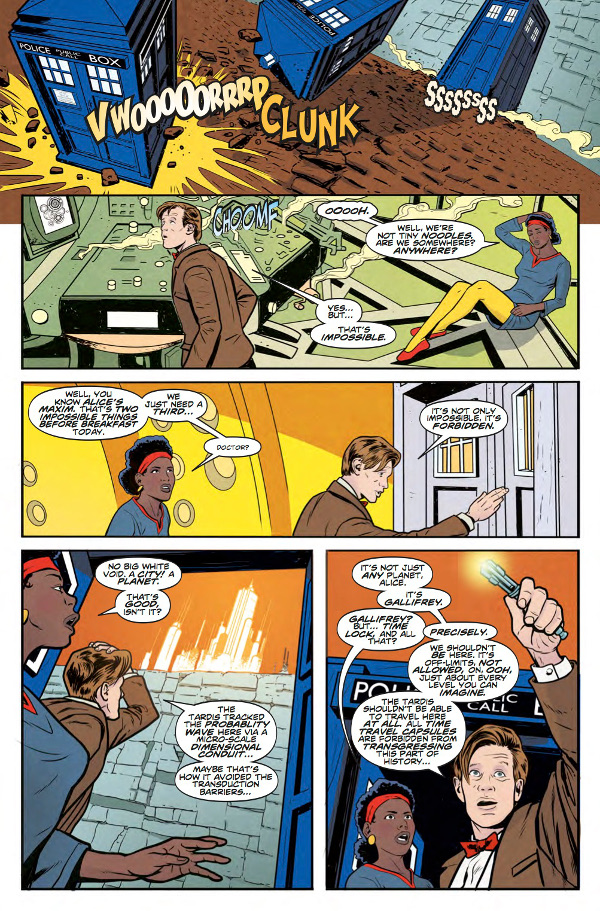 When I first looked at this issue of Doctor Who: The Eleventh Doctor, I had to double-check the credits. At first glance, I could have sworn that the artwork was that of Mike Allred. Further examination revealed a similar streamlined effect and bright colors, but a greater level of subtle detailing. Comparisons aside, this is one good-looking comic and Leanrdo Casco, JB Bastos and IHQ Studios did a fantastic job on it.

Nick Abadzis – writer on Titan Comics’ Tenth Doctor title -takes a turn with The Eleventh Doctor in this fourth chapter of The Lost Dimension and proves just as capable at capturing Matt Smith’s mannerisms as he does David Tennant’s. Abadzis is a fantastic writer of ripping yarns and no mean Doctor Who historian, routinely managing to work references from the classic series into modern stories with no fuss or muss. Indeed, Classic Whovians will be gratified to know that elements of The Cartmel Master Plan feature in the heart of this story. (Don’t know what The Cartmel Master Plan is? Here’s a video that will explain most of it.)

The most miraculous thing about The Lost Dimension to date has been that every individual chapter has been entirely accessible to new readers. Even those new to the world of Doctor Who could pick up this comic and get a painless introduction to one of the richest universes in all of fiction.  So if you have a non-Whovian in your life who needs a little push or are a Whovian who just doesn’t like comics, consider this book your golden ticket into a whole new world.