SPOILER WARNING: Do not read this review if you have not already read Dark Nights Metal #3.

The Dark Knights invasion has not gone unnoticed. Challengers Mountain was somehow relocated to the middle of Gotham City and a vast labyrinth built around it, forged by the wills of Batman’s most dangerous foes. With most of The Justice League missing and The Teen Titans and Suicide Squad having been taken over by the same dark influence responsible for these events, The American Government has been forced to take action.

Numerous shadowy groups have come together in the name of the common good and an extraordinary emergency. Their various leaders aren’t happy about it but General Sam Lane is the least happy of all, being forced to meet with a bunch of freaks like Father Time and peacnicks like Steve Trevor.

Unfortunately, their squabbling has attracted the attention of the most combat-ready of The Dark Knights – a Bruce Wayne from a world where a war was fought to end all wars. A world where Bruce Wayne lost the love of his life, The Amazon Queen, Diana.  A world where Batman challenged The God of War… and won!

The good news is that Batman: The Merciless #1 breaks the mold of the previous Dark Nights one-shots, which all shared the same basic structure.  Step One – Evil Batman with superpowers is introduced. Step Two -We learn their background and how they got powers.  Step Three – Their Justice League counterpart shows up and they fight until Dr. Fate shows up and takes the Justice League member away to their meeting in Dark Nights Metal #3.

The bad news is that the alternate Batman dubbed The Merciless would have benefited from a bit more development. Peter Tomasi’s script tosses aside a saga in a sentence, with the focus on the conflict in the modern day and the tale of how Bruce Wayne won an amazon’s heart and bested a God of War barely touched upon.  This also has the unfortunate side-effect of “fridging” Diana for the sake of Bruce’s story.  Thankfully, the story Tomasi tells is a compelling one and there’s a nice cameo by some of Hal Jordan’s friends at Ferris Aircraft, who have not been seen since Geoff Johns’ run on Green Lantern. 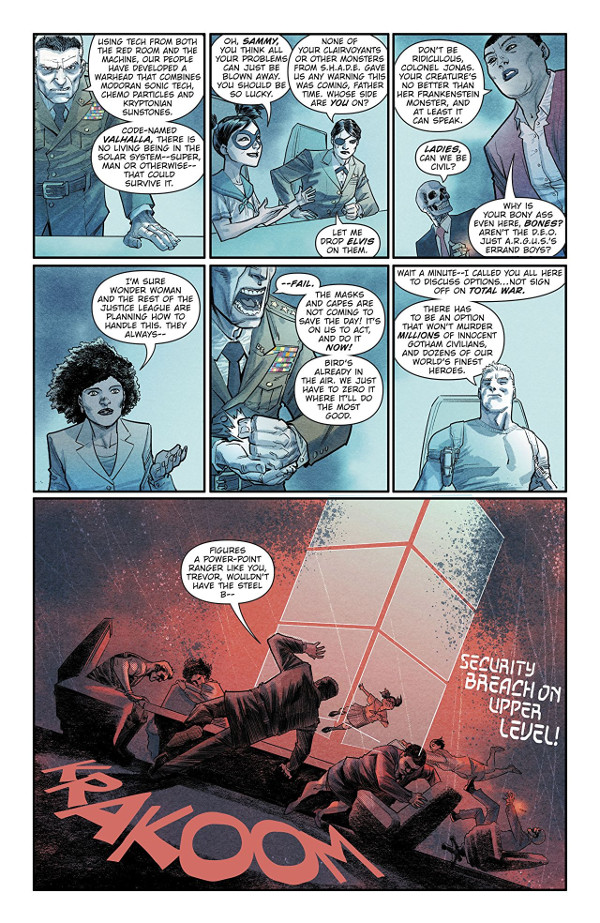 Francis Manapul delivers his usual stellar work on the issue’s art. Manapul’s pencils are eye-catching and the use of colors wonderfully varied, with different palettes being used for each setting. The only respect in which the comic falters is in the depiction of the dialogue of the leader of the Dark Nights, The Batman Who Laughs. The dark red text on a black background used to convey his dialogue is not easily read. This is a minor flaw, however, and like most of the flaws in Batman: The Merciless #1,  a minor imperfection that does little to decrease the enjoyment of a great story with great artwork.