The Marvel Cinematic Universe is on, what, its 57th film and the fear of audience fatigue is settling in. With their more recent offerings, Marvel Studios is doing all they can to keep their material fresh and exciting. We saw this with Spider-Man: Homecoming, where they (along with SONY) hired a relatively unknown indie director, Jon Watts, and allowed him to basically make a John Hughes film starring Spidey. It was genius move, reinvigorating and reestablishing the Spider-Man brand as hip, young, and very, very funny.

Not that Marvel hadn’t already been embracing the lighter side of superheros – that is, after all, their M.O. and the major distinction drawn between them and Warner Bros.’ DC Extended Universe. But even earlier films that leaned more heavily on the comedy – like the Guardians of the Galaxy series or Ant-Man – couldn’t be considered full-on comedies where just about everything was in service of a joke.

Thor: Ragnarok, however, is a full-blown comedy, with jokes and gags and bits being played out from beginning to end. That Ragnarok is also meant as the end of the world – or in this case, the destruction of Asgard – only makes it all that much funnier, with the film approaching what should be the most serious of Thor films as the very silliest.

Ragnarok opens with Thor in Muspelheim, the realm of fire, strung from the ceiling in chains and the prisoner of the realm’s ruler, Surtur. He explains that he’s been scouring the galaxy for more Infinity Stones but has come up empty. He’s still plagued by visions of the world ending, which is why he’s in Muspelheim, hoping to stop Surtur from enacting Ragnarok. And the very fact that the opening scene of Thor: Ragnarok bears a striking similarity to that of the Disney animated comedy, The Emperor’s New Groove, is a good indication that Ragnarok is in no way interested in being a serious picture.

From there, Thor returns to Asgard, where he very quickly (and hilariously) exposes that the Odin in charge is actually Loki in disguise, swiftly dispatching with that cliffhanger from Thor: The Dark World. The two brothers travel to Midgard (AKA Earth) in search of the All-Father, but are immediately confronted by Stephen Strange. After what is a hysterical extended cameo for the Sorcerer Supreme (first teased in the mid-credit scene of Doctor Strange), Thor and Loki eventually come face to face with Hela – Odin’s first child and, in her mind, the true ruler of Asgard. Yes, Ragnarok basically flips the bird to not only Norse Mythology, but Marvel’s interpretation of Norse Mythology, but seeing as it’s all in service of this fun tale, you should really just let it slide.

As Hela invades Asgard, Thor and Loki wind up on the trash planet, Sakaar. Ruled over by The Grandmaster, the planet is more a less a junkyard that hosts these hugely popular gladiatorial fights. It’s from this point on that Ragnarok finds its groove, celebrating the wackiness of their circumstances and the characters themselves. Along with this, Thor is struggling to regain his identity and purpose, having had his hammer, Mjolnir, destroyed by Hela. It’s the closest thing Ragnarok has to an arc for Thor, but it’s one that does nicely tie this film back to the first Thor, where he had to learn to be worthy of that hammer.

To be fair, Ragnarok does not have an especially deep or thought-provoking story to tell. It’s basically: Thor is stranded, hijinks ensue, he builds a team to take back Asgard, more hijinks ensue, the end. The film does provides all the spectacle we’ve come to expect from superhero movies, often presented in wild colors and slow motion poses like the cover of some heavy metal album. The fighting (of which there is quite a bit) happens on a grand scale, with Thor or Hela or even Loki laying waste to dozens of enemies like they’re characters in a Dynasty Warriors game. It’s all very over the top and far from the intense hand-to-hand combat seen from the more earthbound Avengers, but then that’s the whole point. These are gods trading blows with monsters and it should be as large and grandiose as possible. 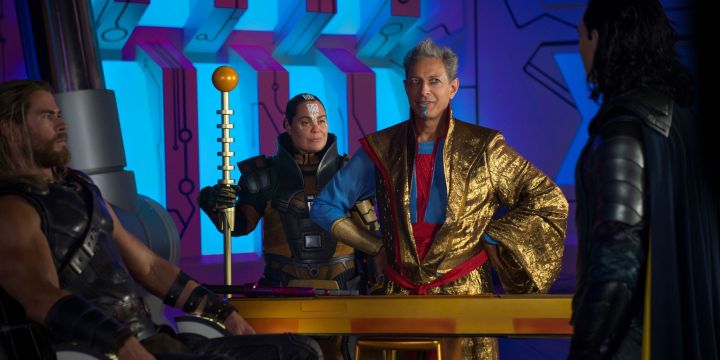 Thor: Ragnarok is a full-blown comedy, a decision which Chris Hemsworth first lobbied for, feeling bored with his portrayal of the God of Thunder. The hiring if director Taika Waititi, however, is what cements this film as the flippant approach to comic book movies it is. From start to finish, Ragnarok has everything from laugh out loud moments to scenes that’ll have audiences chuckling throughout. Much has been made of Waititi encouraging his actors to play with and improvise their scenes, and what that does is create a film that feels loose and relaxed, even when the stakes are as high as the end of all things.

The performances Waititi coaxes from his cast are delicious, with talents like Cate Blanchett, Karl Urban, and Jeff Goldblum relishing the kookiness of what they’re asked to do. Urban in particular gets a most interesting role as Skurge, the Asgardian every-man who first aligns with Hela but almost immediately questions if that was the right thing to do. Hemsworth has already displayed a great knack for comedy, and this take on Thor only dials that up. Tom Hiddleston makes for a great foil, retaining Loki’s slyness but also getting to play the exasperated brother. Mark Ruffalo is Hulk more than he is Banner and it’s great to see the big green guy given more to do than grunt and smash. Because of that, Banner doesn’t have much to work with, but his brief tenure on Sakaar has him reacting to the alien planet in a wonderfully silly sequence involving a Hulk parade.

In addition to Blanchett and Goldblum (who again just chew the CGI scenery in the delightful way only they can), franchise newcomer Tessa Thompson steals every scene she’s in as the boozy veteran, Valkyrie. She’s basically an action hero who’s turned her back on her past as an elite warrior, wishing to drink away her pain as she hides out among the garbage. It’s a refreshing performance in a franchise with still very few women characters (let alone characters of color) and Thompson is simply fantastic. But she isn’t the only scene-stealer or even the best one – that would be Korg, a small role Waititi himself plays via motion-capture who is just the sweetest rock monster ever. Again, all credit for making Korg so enjoyable goes to Waititi, whose clever ad-libbing creates some of the film’s best one-liners. (“Piss off ghost!“, “Another day, another Doug,” I could go on and on.) 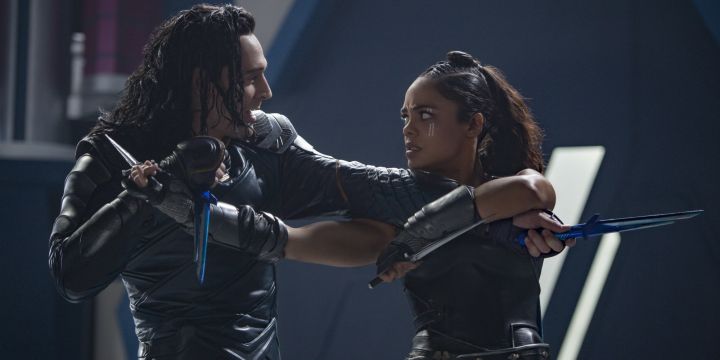 Thor: Ragnarok will potentially be a divisive film among MCU fans. On the one hand, it’s the jolt of energy that Thor desperately needed, bringing new life to the character after the dismal Dark World. But it’s also so different from any previous Thor film – or really, any MCU before it – that it will certainly have detractors who find it shallow with a paper-thin plot. That’s likely more the fault of trying to faithfully present Waititi’s comedic style while also delivering another chapter of the saga building, eventually, to Thanos and his Infinity Gauntlet. Even so, Thor: Ragnarok is an overwhelmingly enjoyable two hours and 10 minutes, giving Thor and friends an irreverent and downright silly adventure before things take a inevitably more serious turn in Avengers: Infinity War.