The comics based on the world of the games Injustice: Gods Among Us and Injustice 2  have proven critical and commercial hits. This surprised many comic fans, who were used to video game tie-in books being rushed projects that made little attempt at crafting high art.

Art is what was crafted, however, with writers like Tom Taylor and Brian Buccellato spinning stories that drew complementary comparison to Alan Moore’s For The Man Who Has Everything. They also offered up portrayals of characters like Green Arrow and Harley Quinn that better conformed to their classic characterizations than what was seen in The New 52 universe.

Despite this praise and all the accolades, there is one character whom most agree the Injustice series did not handle correctly – Diana of Themyscira.

The Wonder Woman of Injustice is a more militant figure than most portrayals of The Amazon Princess. She gladly joins Superman’s efforts to establish a Regime that will force peace upon the world in the wake of Lois Lane’s death. Disturbingly, her primary motivation in doing so (based on the in-game movies, at least) seems to be an unrequited love of Superman and the hope that, with his fears of protecting the world calmed, Superman might turn his eyes to the woman who helped him make it possible and forget the wife and child whose deaths spurred him into using his powers to the fullest. 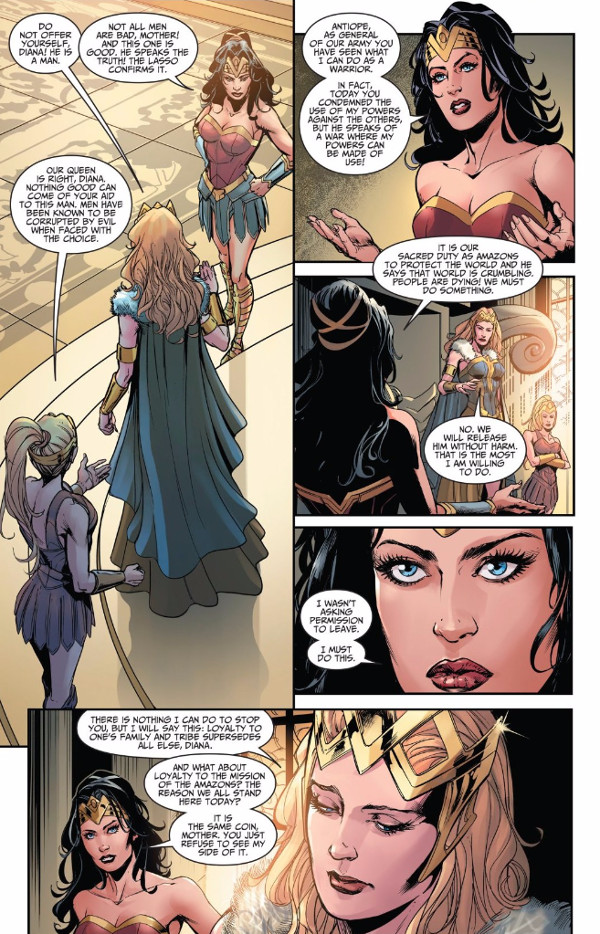 The first story in this annual – Wonder Woman of War – makes a game attempt to explain just why this Wonder Woman is so different than the character her fans are used to. Written by K. Perkins and based on a story idea by Tom Taylor, the tale starts out on familiar territory that uses the base plot of the Wonder Woman movie as a starting point. Steve Trevor washes ashore on Themyscira and speaks of the great war that threatens all of the world but the story takes several unexpected turns once Diana leaves her homeland to face Man’s World herself. Opinions may differ on how well this story accomplishes its’s goal in justifying Diana’s off-model portrayal, but it is successful in giving her greater motivations for her ferocity than a desire to make super-babies with Kal-El.

The artwork in this section is noteworthy, with three different art teams being employed – each tackling a different setting; Themyscira, Man’s World during World War II, and The Modern World today. This cunningly allows the differences between their individual styles to enhance the story as the visual tone shifts, rather than distracting from the writing as is often the case when multiple artists work on a single story.

The issue’s other story is equally well drawn, with Pop Mhan producing one of his usual excellent offerings, with colors by J. Nanjan and lettering by Wes Abbott.  Grounded Zeroes, written by Ground Zero author Brian Buccellato, reveals the fate of The Harley Horde – the gang of ordinary people who became Harley Quinn’s partners in crime-fighting as Harley made the transition from violent vigilante to honest-to-goodness (sort-of) hero. While not the stuff of epics, it is still a spirited story that explains away the absent of Harley’s sidekicks as Injustice 2 opens. 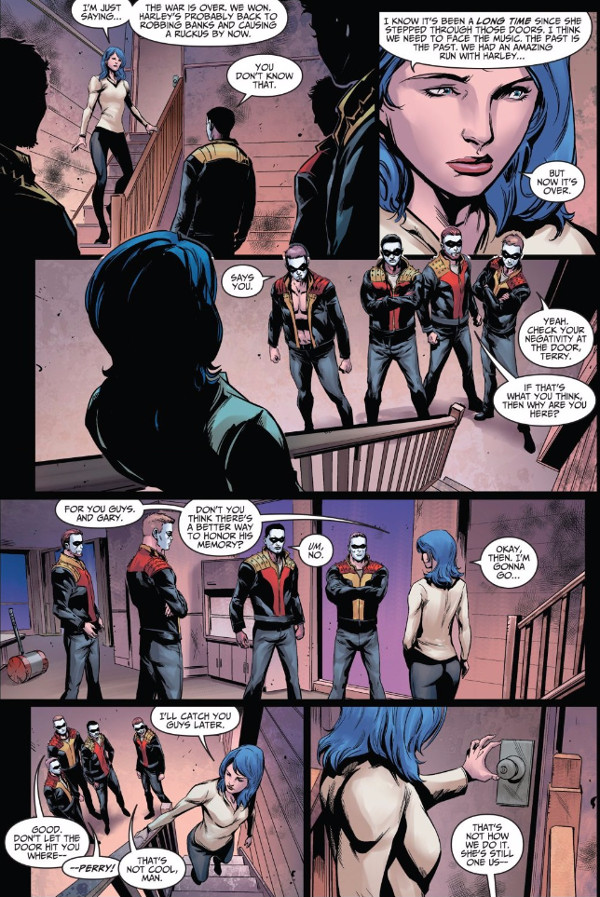 Injustice 2 Annual #1 isn’t likely to win many converts to the glories of the Injustice universe. This is not due to any lack of quality but rather due to the purpose of this volume. It is not written to attract new readers – it is here to answer the questions of the established fan base who wonder why Wonder Woman is the way she is and whatever happened to Perry, Gary, Terry and the rest. It accomplishes that goal well-enough but could have been a little better when it came to showcasing just why this setting has won so much loyalty.