Even in the futuristic Texas metropolis of Solar City, the holiday season is a special time. Yet despite most of the populace taking a break to spend time with friends and family, Evil never rests. Neither then can the forces of Good.

It’s a fact that Solomon Hitch – the ever-lovin’, monster-fighting Halloween Man – has come to accept, though he feels even more out-of-place than usual. Still, when he gets a call on Christmas Eve asking for help, he’s out the door faster than you can say Jack Skellington.

Finding only a grieving family and no monsters in need of slaying, Solomon is quick to deliver an apology and show himself out when they deny having called him. Once he is out on the street, Solomon finds the source of the phone call – Saint Nick, himself!

It says a lot about Solomon’s life that getting called into action by Santa Claus isn’t the weirdest thing that’s happened to him. Neither is making a journey into the Celtic underworld to save a soul from being abducted by the faerie King of the Dead.

Meanwhile, across town, Solomon’s girlfriend – super-scientist and general bad-ass Dr. Lucy Chaplin – is up to her ear lobes in trouble! Monsters have attacked The Miss Super-Science Christmas Pageant and only Lucy seems to have been prepared for this eventuality. 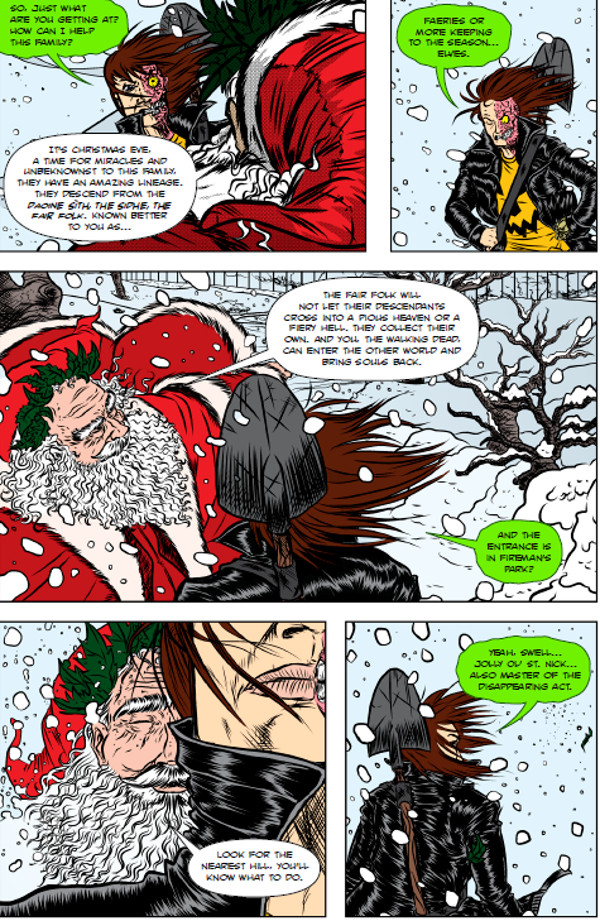 The latest Halloween Man special is filled with all manner of fantastic and miraculous sights. Banshees! Orcs dressed as Confederate soldiers! Wicked faeries! Snow in Texas!

Writer Drew Edwards has done it again, penning two fantastic and memorable stories that defy the conventions of Christmas comics. This is unsurprising, given that Edwards’ Halloween Man series has been defying the usual tropes of  superhero and horror comics for years.

The first story, Fairy Tale, puts a neat twist on the idea of Elves at Christmas by utilizing Finn Bheara – a Celtic god/Fareie King who held a similar position to Hades. The second story, Like A Ghost, has little connection to the holiday season apart from occurring on Christmas Eve. It is no less enjoyable for that, though some may wonder why any organization – even a presumably secular scientific one – would hold a pageant on Christmas Eve! Of course those who ask such questions would also probably complain about the impossibility of a superhero who became half-zombie after being attacked by a vampire and animated by the magical power of horror movie sequels. It is their loss. 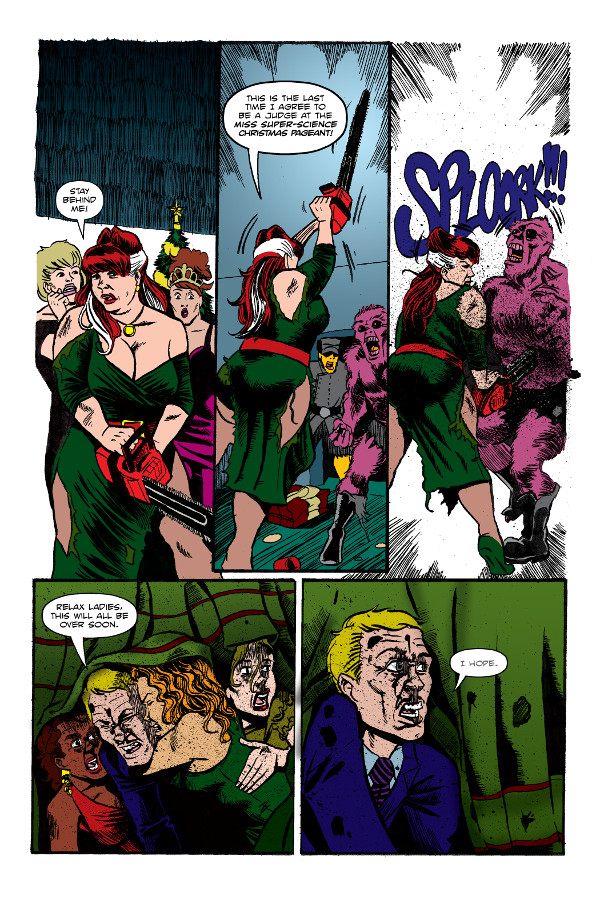 The artwork, alas, is not quite as lively as the stories. James Figueirdo, who draws Fairy Tale, has a good eye for detail, but his sense of proportion is off in some panels. The story is also rendered oddly, with colorist Dan Conner randomly tinting individual panels one color with seemingly little rhyme or reason for doing so.

Like A Ghost suffers similar problems, with the blood-spray in some scenes being rendered in black rather than red, creating an effect that looks like a printing error rather than a stylistic choice. Still, the artwork of Kevin Richardson gives the tale the appropriate appearance of a classic EC Comics horror title, despite the uneven coloring.

For all its flaws, Halloween Man Christmas Special 2017 will prove a welcome antidote to those suffering from too much holiday banality. Whatever else may be said about this series, it is never dull and a collection of Halloween Man comics may be just the thing for the horror fan in your life this holiday season.

Halloween Man Christmas 2017 will be released on Comixology on December 22, 2017.