Star Wars season is upon us! Having laid claim to the mid-December release window with Star Wars: The Force Awakens, Disney and Lucasfilm have turned the release of a new Star Wars film into a holiday event. Last year, the occasion was marked with the release of their first standalone anthology film, Rogue One: A Star Wars Story. This year they continue the trend with, Star Wars: The Last Jedi, and in December 2019, the saga will come to a close with the as-of-yet untitled Star Wars: Episode IX.

The Last Jedi is the second chapter of this new trilogy and by being so it has some high expectations to meet. The Force Awakens was a tremendous success in just about every way that matters, and the second film in the Original Trilogy, The Empire Strikes Back, is widely considered to be the very best Star Wars film. The bar has been set very high, but writer and director Rian Johnson has definitely risen to meet it.

Picking up events very soon after the end of The Force Awakens, the Resistance has little time to enjoy their victory at Starkiller Base. The First Order is already upon them, forcing General Leia, Poe Dameron, and the rest of their ragtag rebellion to flee. For much of the film, the fledgling Resistance is on the back foot, constantly on the move in an attempt to outrun the oncoming assault of the First Order’s advancing fleet. In a last ditch effort to buy themselves more time, Poe dispatches Finn and mechanic, Rose on a secret mission to find a master code breaker who can sneak them on to the Supreme Leader Snoke’s ship and disable their tracking.

Meanwhile, as the Resistance struggles to survive, Rey gets to know Luke Skywalker, the Jedi Master in self-imposed exile she’s been sent to collect and who she hopes will train her in the ways of The Force. Their meeting, however, doesn’t go as expected, leaving Rey to reflect on the power within her as well as her growing connection with dark side and its wielder, Kylo Ren.

The Last Jedi is a thrilling, high-stakes adventure that is as emotionally complex as it is action-packed. For fans, watching the film will be a transformative experience. There will be a time that came before seeing it and a time afterwards where nothing is the same ever again. There are moments in this film that are arguably some of the most important in the saga, forever changing what we know about a galaxy far, far away.

Clocking in at two and a half hours, The Last Jedi is the longest Star Wars film to date, but never does it feel overly long or its story bloated. There are certainly sections of the film which will excite more than others, and honestly, repeat viewings may highlight areas where the plot is stretched a little too thin, but from start to finish the movie never lets up. It has an unrelenting pace, surging forward as its characters are brought closer and closer together.

Visually, this may very well be the most stunning a galaxy far, far away as ever been. The locations are spectacular vistas and the shots composed within them are striking. It’s evident that Johnson and his frequent collaborator, cinematographer Steve Yedlin were very much in sync, creating a movie that’s beautiful in both its look and feel. Of course, the special effects are as excellent as we’ve come to expect from the wizards at Industrial Light & Magic, and more than once throughout The Last Jedi they are responsible for what are sure to become some of the most iconic scenes in the whole saga.

But where there can and certainly will be some criticism of story beats and a few chosen effects, Johnson and his cast have done an incredible job at capturing theses characters – even when their arcs take them places we’d have never expected. Be they returning favorites or brand-new faces, The Last Jedi is a pitch perfect exploration of its characters, examining their flaws, their strengths, and their motivations.

Both Daisy Ridley and Adam Driver have only grown more confidant in their roles, bringing an incredible depth to both Rey and Kylo. These two characters are even more tightly intertwined than they were in The Force Awakens, and the chemistry Ridley and Driver share make their struggles feel aligned even when they’re not. (Am I being cryptic enough? I sure hope so.) Oscar Isaac gets to enjoy a more substantial arc as Poe Dameron in this film, demonstrating he’s more than a pretty fly boy. Unfortunately, Isaac’s increased screen time comes at the expense of John Boyega’s, with Finn still having a valuable role to play but it’s arguably the least interesting of three lead’s story lines. Still, Boyega’s Finn remains very much the heart of this new trilogy and is enjoyable as ever in the role. Andy Serkis is again providing the mo-cap performance for Snoke, giving a more memorable performance in this film that he’s clearly enjoying immensely. Domhnall Gleeson and Gwendoline Christie also return as General Hux and Captain Phasma, with Hux being used more effectively than before and Phasma, sadly, again getting short-changed (but that’s absolutely no fault of Christie’s).

Joining the cast are three new characters who vary in importance from Laura Dern’s Vice Admiral Amilyn Holdo to Benicio Del Toro’s mysterious “DJ”, each of whom prove how ripe Star Wars is for new characters. By far the standout here is Kelly Marie Tran’s Rose, whose sincerity is perfectly matched with Finn’s fear and guilt, making them a wonderful new pairing. Tran’s enthusiasm oozes in every scene and it is infectious, elevating what is, again, the weakest of the film’s plots (though by no means a bad one). 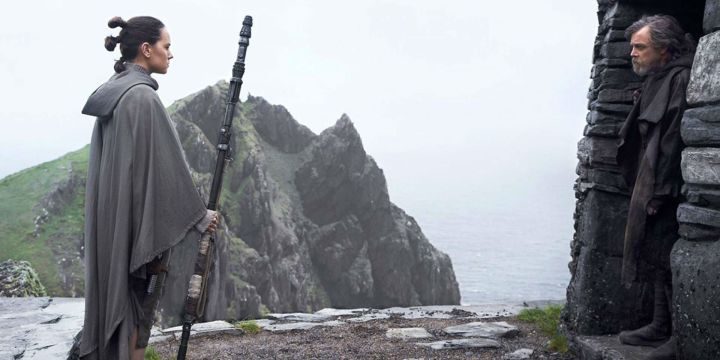 The Last Jedi is very much about Rey’s journey, but Luke Skywalker’s role within that journey is extraordinary and Mark Hamill brings everything to his performance. Fans and non-fans alike are sure to be mighty impressed with the work Hamill does in this film, as he manages to be funny, frightening, disenchanted, overwhelmed, inspiring and a whole myriad of different emotions. To be fair, Hamill’s earlier performances as Luke demonstrated an amazing knack for evolving a character, but in The Last Jedi he takes Luke to places no one could have guessed. On the same level is what will sadly be Carrie Fisher’s final performance as Leia, a fact that adds an extra somber note to what is at times a bleak movie. Fisher’s performance this time around is even better than in The Force Awakens, commanding the screen like the royalty she is. There’s one moment in particular, which I won’t spoil, but it’s so tremendous for Leia’s evolution that you’ll know it when you see it and it is breath-taking.

With The Force Awakens, a new spark was ignited in a galaxy far, far away, fueling a whole new Star Wars mania that continues to grow with every film, book, comic, and TV show. The Last Jedi transforms that spark into a raging fire, one that’s guaranteed to burn bright for years to come. This movie is an experience that will leave fans in a daze as they try and absorb all that’s just happened, but as its magnitude sinks in they’ll be clamoring for more. Star Wars hasn’t felt this exciting in ages, and the possibilities for the future now seem endless.