The civil war in Gorilla City has been quelled, but Ra’s Al Ghul and his Suicide Squad are just getting started. Working with Professor Ivo, Ra’s has overseen the creation of a new Amazo Robot – the deadliest to date. Though it brings him no pleasure to do so, Ra’s plans require the culling of the human race and what better place to start than the most infamously overcrowded city on Earth?

As the new Amazo streaks towards Dehli, Damian Wayne contacts his allies in Khandaq. It is here, living under the protection of Khandaq’s ruler Black Adam, that Wonder Woman and a rogue faction of Amazons are seeing to the training of Superman’s newly arrived cousin, Kara Zor-El. Though her powers are great, Kara does not have a warrior’s skills – a problem the Amazons are all too happy to solve. Yet Kara is too inexperienced to aid in this battle, which Black Adam and Wonder Woman go to meet alone.

At the same time, Batman has detected the approach of the Amazo robot and has put out the call to his allies in the Justice League Task Force to move to intercept it. How will the two teams react when they meet? And how will they all respond when a symbol of hope long-dead in the world of Injustice makes its return to the field of battle?

The artwork in Injustice 2 is a study in contrasts. The sequences in Khandaq are illustrated by Mike S. Miller with colors by J. Nanjan. The style here is animated and skilfully done, but it appears too light and airy compared to the gravity of the tale at hand. This is made more apparent by the rest of the comic, which is illustrated by Bruno Redondo with inks by Juan Albarran and colors by Rex Lokus. Here the inks are deeper and the colors darker, which better suits the tone of the story. 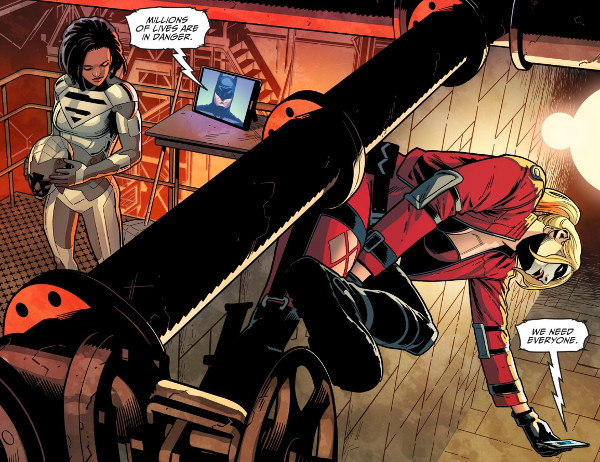 The story itself, unsurprisingly, is fantastic. I’ll spare you the details beyond saying that Tom Taylor delivers his usual mixture of high drama and rising action with a few moments of comedy along the way. I will also say that if you dislike certain infamous aspects of the movie Man of Steel or are a fan of Young Justice, you will want to check out this issue for its ending sequence.