I decided to give Sheena a second shot, after being unimpressed with it’s 25 cent #0 preview issue and even less impressed by its lackluster first issue. Given that my primary complaints about the comic involved the erratic artwork and that Sheena #6 was billed as the start of a new storyline with a new artist, it seemed only fair given how much I’ve enjoyed co-writer Marguerite Bennett’s work in the past. Thankfully, Sheena #6 proves to be everything I had hoped for when I heard Dynamite Entertainment now held the license for The Queen of the Jungle.

The script by Bennett and Christina Trujillo does a fine job of summarizing the first story arc of the series for new readers without getting too bogged-down in details and with far less of Sheena talking to her animal friends in order to deliver the needed exposition. In brief, Sheena has managed to repel an invasion of otherworldly creatures with the assistance of Chano – an activist who uses drones to monitor the illegal activities of the industrialists who seek to plunder the rainforest for their own benefit. Though Sheena has come to trust Chano, she knows the rest of her tribe is fearful of outsiders and Sheena fears she may be cast out of the only family she knows for having the appearance of a “cowodi” (or “outsider”) and for befriending an outsider, no matter how noble his intentions!

As the issue opens, Sheena is investigating a spreading infection within the vegetation of the forest – something she fears may be tied to the recent otherworldly invasion. Though Sheena is admonished for her failings in protecting the tribe while The Chieftaness was away, she is charged with investigating the source of the rot along with a new mystery – a huntress who leaves devastation and sickness in her wake, whom a sister tribe reports seems to be searching for Sheena.  With her best friend Lirio The Healer in tow, Sheena goes forth to find this new enemy. 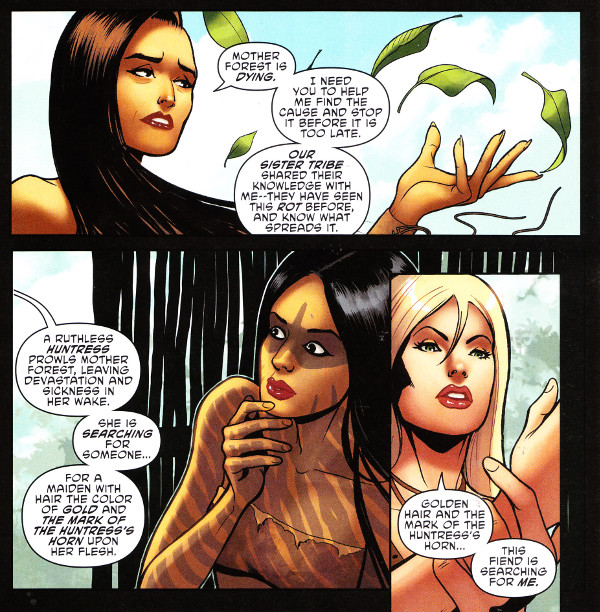 The artwork for this issue is a quantum leap ahead of where it was when I last read this series. Ignoring the benefits offered by having a single artist and colorist working on one issue, the work of Maria Sanapo and Ceci De La Cruz is far stronger than that of the previous art teams. Granting that every woman we see in this series has the body of a bikini model, there is no gratuitous sense of cheesecake or forced posing in Sanapo’s artwork, nor are there any continuity issues regarding the design of Sheena’s costume. De La Cruz creates some rather impressive lighting effects with the coloration, such as the way shadowed leaf patterns fall or how light passes through the wall of a shelter of sticks.

The writing is far stronger this time as well. I found the friendship between Sheena and Lirio to be the most enjoyable aspect of this issue. While I still wish more time had been spent in exploring Sheena’s background at the start of the series, Sheena #6 does a far better job of establishing Sheena’s world and her place within her village than the original first issue. The classic Sheena comics depicted Sheena as living apart from the other people in her jungle whereas she seems to be a respected warrior belonging to a single tribe in this series. While this makes a lot more sense in the terms of a tribal society, it raised a lot of questions in the first issue given that Sheena was taking orders from a village elder when she is supposed to be “The Queen of the Jungle.”

There’s still some aspects of the development of the world that trouble me, such as the fact that The Elder and The Chieftaness don’t have proper names. I’m also faintly amused that the writers researched a proper derogatory native word for “outsider” (i.e. cowodi) and reference a rather obscure regional monster called The Mapinguari for this issue, but still have Sheena cursing Damballa – an African deity, whose name they misspell. Nit-picking aside, this is a solid comic and I fully plan to check out the next issue.