The plans of the The Victim Syndicate have been thwarted, but at a high cost. Armed with a special rifle provided by her father, Col. Jacob Kane, Batwoman made the shot that ended the life of a rampaging Clayface, who had been driven mad by the machinations of The First Victim. Now, Tim Drake’s dreams of establishing a team that could better protect Gotham are as dead as his romance with Stephanie Brown and his hopes for a life outside the shadow of The Bat. Worse, Cassandra Cain is more withdrawn than ever in the face of the death of her best friend.

Still, the question remains – what to do with Kate Kane?  Many members of The Batman Family feel she has irreparably broken their trust and tarnished the reputation of The Gotham Knights. Others are willing to give her the benefit of the doubt, believing that she honestly didn’t see any other way to stop Clayface. Still others think she was in the right all along and are pondering a parting of ways from Batman and his methodologies.

As a conclave is called and Bruce Wayne arranges a meeting with those allies he can still trust to be honest with him, Kate Kane ponders her own fate and whether or not she even wants to go on as part of The Batman Family… or become something else. 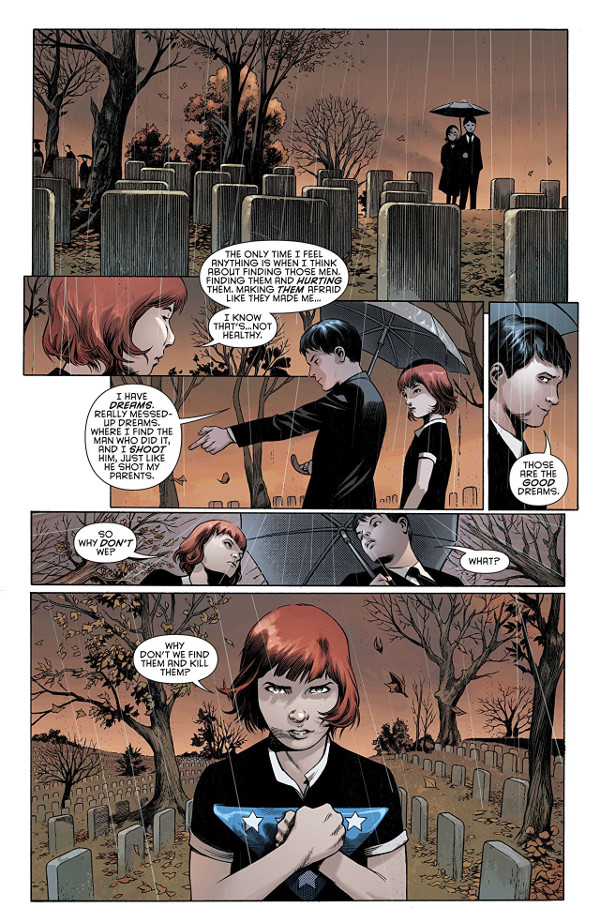 I regret that I cannot truly showcase how amazing the artwork in this extra-large anniversary issue of Detective Comics is. The majority of the comic is rendered through a number of two-page spreads that allow the story to flow in a unique and innovative way. Alvaro Martinez’ layouts are fantastic and fully take advantage of the space offered by using this format, fitting an astonishing amount of detail into every panel. The rest of the art team is equally impressive, with Raul Fernandez’s inks finding the perfect balance between outlining and shading the finished art and Brad Anderson delivering his usual stellar job on the color art. The lettering is also impressive, though for some reason no letterer was credited on the the title page of this issue.

What can I say about James Tynion IV’s writing that has not been said already? His command of The Batman Family is astounding and he proves just as capable of handling the characters he hasn’t been handling on a regular basis in this issue as he has the regular cast since he took over Detective Comics. Dick Grayson, Jason Todd, Damian Wayne and Barbara Gordon are all written true to form as they join Tim Drake and Bruce Wayne for their war council about what to do about Batwoman. He also writes a mean action sequence, and the scene with Batwoman discussing the current situation with Batwing as she fights one of the best gorilla-themed villains ever brought a smile to my face.

I stand by my assertion that this is the best Batman book on the stands right now. If you’ve ever loved Batman and the whole variety of characters that were developed around him, you need to be reading this book.