Central City is slowing to a crawl. The telepathic Gorilla Grodd and his allies in the criminal scientist syndicate known as The Black Hole have begun draining the energy from the city in a desperate bid to prolong the dying Grodd’s life. Worse yet, they’ve drained The Speed Force right out of Barry Allen a.k.a. The Flash!

Thankfully, there is another.

Wally West, the first Kid Flash, who took up his uncle’s mantle and became The Flash in another world, is there to help. Wally has been laying low ever since he escaped from beyond the boundaries between universes, where some unknown intelligence trapped him before building a new world where Barry Allen was the only Flash.

Also on hand to aid in the battle against Grodd and The Black Hole are a different Wally West – the Kid Flash of the new reality – and Avery Ho, a Central City teenager who has taken up the name of The Flash to become The Flash of Justice League China. Yet even with all their power, can they stop Grodd’s plans or stop Barry Allen from a suicide mission using Grodd’s technology to try and restore his powers? 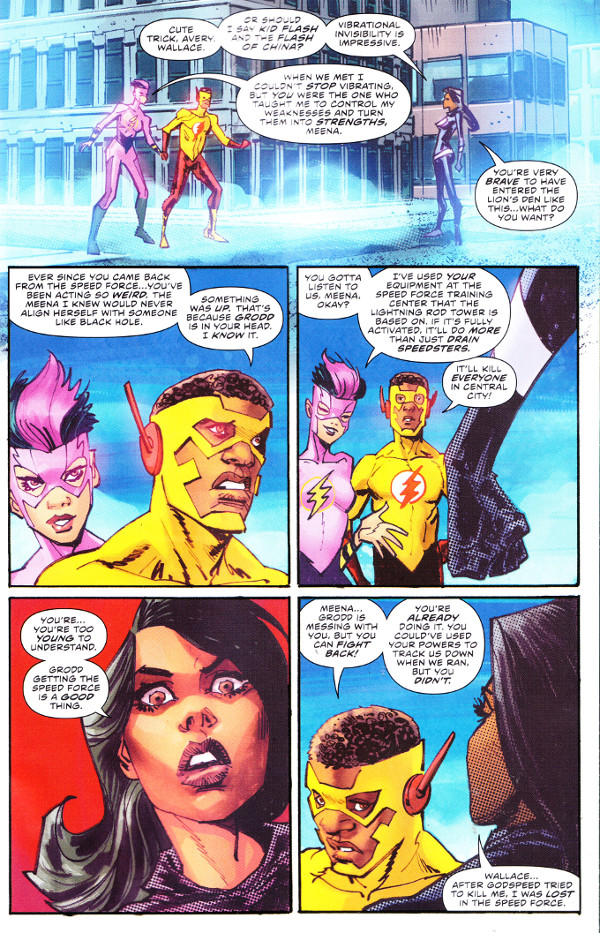 The Flash has been running through guest artists as fast as Barry Allen himself in recent months. This issue sees the artist and inker pens taken up by Dan Panosian, whose artwork on the crime drama Slots and Conan/Red Sonja was fantastic. Unfortunately, Panosian’s gritty, detail-driven style doesn’t quite fit the generally optimistic aesthetic of The Flash, which generally favors brighter, more stream-lined art. It should be noted, however, that Panosian’s artwork does not look bad – merely incongruous to the tale at hand.

The story continues to thrill, however, thanks to Joshua Williamson’s ability to keep things moving. The script for this issue is filled to the brim with intense action sequences. What really sells the story, however, is the conflicts between the characters. Of particular note is the subplot involving the younger Wally and Avery and their efforts to redeem Dr. Meena Dhawan a.k.a. Fast Track a.k.a. The Negative Flash.

Dhawan acted as a mentor to both young speedsters and was an engaging character before her apparent death and resurrection as part of The Black Hole. It’s still unclear if Meena is a willing thrall to Grodd’s design or being telepathically controlled by the simian slave-master. That mystery is sure to keep fans guessing, just like Barry’s sudden obsession with restoring his powers at any cost, which could be the result of another of Grodd’s mental commands.

Good as it is, as Part Three of the current Perfect Storm storyline, The Flash #42 is not a good issue for those who are new to this series to start with. New readers would do well to track down The Flash #40 and start from there, with the understanding that the artwork between issues is somewhat erratic and the story a fast-paced one.