As a video game, Tomb Raider is one of the longest lasting and most recognizable series around. The games are also, by and large, pretty great; some are better than others, but then that’s the way of a franchise spanning over 20 years and 18 installments. As a film series, however, Tomb Raider hasn’t seen the same success. In 2001 and 2003, Angelina Jolie starred as Lara Croft in two big screen adaptations that haven’t aged all that well, and mostly because of the ludicrous and overt sexualization of Lara – something which was also staple of the early Tomb Raider games.

Times have changed, thank goodness, and in 2013, Crystal Dynamics rebooted Tomb Raider with a game that gave fans an origin story for Lara, exploring how it is she came to be a proficient tomb raider and adventurer. The reboot pulled heavily from games like Uncharted and made a character of Lara beyond being just a big-breasted badass. This Lara was naive and inexperienced, but she made up for that through sheer determination and skill. After Tomb Raider came Rise of the Tomb Raider and late this year, Shadow of the Tomb Raider will complete the trilogy. Across this new series, Lara grows in confidence and ability while the gameplay maintains the great platforming and puzzle-solving which are a staple of the action-adventure series.

The reboot game revived interest in the franchise and is directly responsible for why there’s this new film. Tomb Raider starring Alicia Vikander is nothing like the Jolie films of the early 2000s, and for the most part, it’s all the better for it. Taking its cues from the 2013 reboot, Tomb Raider introduces audience to a younger Lara who’s an irresponsible thrill-seeker. Her father disappeared seven years prior and is presumed dead, but she refuses to accept that, and in doing so, refuses to accept her inheritance. Living the life of a poor, reckless bike courier in London, Lara is soon swept up in the mystery which led to her father’s disappearance and a hop, skip, and jump later, she’s on her way to the same strange island in the Pacific where he was last seen. There, Lara meets with countless obstacles but is able to overcome them thanks to her strong intuition, athleticism, and cleverness. Oh, and there’s an ancient tomb in want of raiding because of course there is. 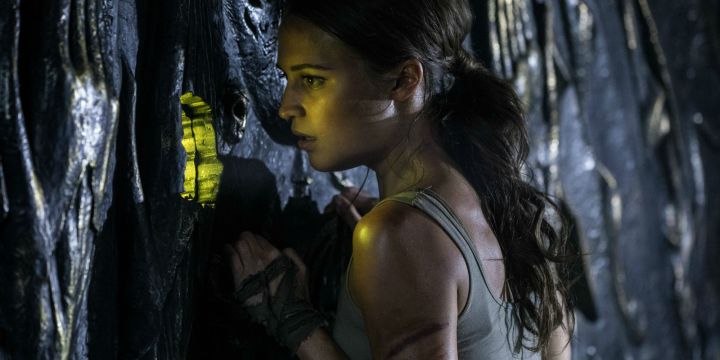 Tomb Raider delivers exactly what’s expected and not much more. This is an action flick through and through, delivering the thrills and spills with rapid fire execution. There’s little in the way of character depth and how the film tries to build up certain emotional arcs fall flat. Yet, this hardly detracts from the enjoyment of watching Lara race through the jungle or leap across chasms (some dodgy looking CGI aside). The action beats are the framework of the film – shot expertly by Kingsman cinematographer George Richmond – and they are what make Tomb Raider such an exhilarating experience.

In this way, Tomb Raider is an excellent advertisement for the video game, and it’s a little baffling there was no corporate synergy at work to better time the release of the upcoming game around the film. (Maybe for the home release?) As video game movies go, Tomb Raider feels unique in that it understands what it’s adapting. Most video game movies fail because they try too hard to stand apart from the game and they forget why it is fans enjoy the property in the first place. Tomb Raider isn’t trying to present itself as the next Bourne film, more or less sticking with the plot of the 2013 reboot (such as it is) and delivering on the spectacle fans expect of the franchise. Watching Tomb Raider is like watching a Twitch streamer who makes the game look easy, pulling of combos seamlessly and nailing quick time events on their first try.

What hurts Tomb Raider and stops it from being a truly excellent video game movie is its clunky attempts at digging deep into character motivation and offering up poignancy. A video game can deliver this, sure, but it’s often because the player has been making decisions and therefor bears some responsibility for where its characters end up. The film, however, really wants that big emotional payoff and the way it goes about achieving it is predictable and lazy. This isn’t to suggest that a video game movie can’t include some pathos or catharsis, but how Tomb Raider goes about this doesn’t work.

What truly makes Tomb Raider so enjoyable is Alicia Vikander’s Lara. The story is silly and pretty inconsequential beyond getting her from one action set piece to another, but boy, is Vikander having a blast. It’s more than evident that Vikander trained her butt off for this movie and her athleticism makes the various feats she (and her team of stunt professionals) pull off all the more thrilling to watch. Along with being a great ad for the game, Tomb Raider is also pretty good at inspiring viewers to hit the gym. And not only does Vikander believably look and act the part, but her performance builds Lara from a reckless youth to a seasoned adventurer. Vikander endears us to Lara and it makes us want to root for her to succeed.

No one else gives nearly as memorable a performance as Vikander, with most of the cast slotting themselves into perfunctory, stereotypical roles of villain or mentor. The exception to this is Daniel Wu’s Lu Ren, the ship captain who brings Lara to the island. Their chemistry is fantastic and the film is worse off once it sidelines Ren for other character who, while more important to the plot, are no where near as fun to be around. Lara and Ren’s interactions are also the only time Tomb Raider tries interjecting any humor, so again, once the movie moves on from Ren it loses some energy.

Tomb Raider is a big, splashy, dumb action movie. It’s a great way to spend an afternoon at the theater, but there isn’t much here to really warrant repeated viewings. That being said, with such an engaging lead actress and over 20 years of material to pull from, a sequel could very easily prove to be an even better film. Of course, that will only happen if this one performs well enough, but seeing as Tomb Raider is by far the best video game movie in recent memory, it’s worth giving a chance.