A month ago you couldn’t have paid Nick Wilson to go back to his high school reunion. But a month ago he wasn’t being paid by his super-genius billionaire arch-enemy to become the face of a new museum devoted to their battles. Is time-and-a-half worth dragging up a lot of painful memories of the man he was before the man he became? No, but a paycheck’s a paycheck.

This deconstruction of superhero tropes continues to amuse, but I found a bit more enjoyment in the essay in the back of the book where Eddie Gorodetsky discusses clichés in sitcoms and how repetitive reality shows evolved from them. There’s some doctoral level thesis just waiting to be written about the through line from the boys of My Three Sons getting lost on a camping trip to Naked And Afraid XL, but I’ll leave some other scholar to tackle that bit of nostalgic wankery.

This is not to say that The Further Adventures of Nick Wilson is unenjoyable. Far from it! Stephen Sadowski’s artwork is still a joy to behold, with vivid colors by Hi-Fi and some solid lettering by A Larger World Studios. I just find Andreyko and Gorodetsky’s discussion of the clichés they avoided more interesting than the high school reunion they depicted.

Three issues in to the enigma that is Ice Cream Man and this anthology’s biggest secret is starting to somewhat unfold – specifically, who is the Ice Cream Man. It appears he is The Monkey’s Paw in the flesh, granting wishes at a price. This time, the wish is for a one hit wonder from the 1950’s to have a second hit song. In a trippy adventure that is Yellow Submarine Meets Aliens, the protagonist fights a lack of creativity in modern music to save the music industry and himself. The final twist is worthy of The Twilight Zone. Ice Cream Man is easily on its way to become my favorite new comic book series of 2018. 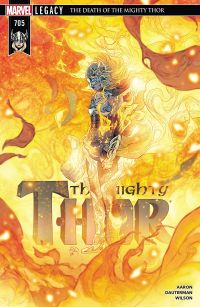 Having Jane Foster take up the mantle of Thor is easily one of the best decisions Marvel has made in years. Not only did it establish that nothing about being Thor was intrinsically masculine, but it offered a side character so often relegated to “love interest” or “representative of Midgard” a chance at being her own hero. And she’s a damn good hero and arguably a better Thor than Odinson ever was. The extra wrinkle that Jane is dying of cancer and every time she becomes Thor it negates any chemotherapy or treatment just adds to her sacrifice. Now, the cancer has grown too strong and the next time Jane becomes Thor, it will be her last.

If I’m being honest, I haven’t been keeping up with The Mighty Thor as diligently as I should have. I’ve read a trade here and there, but I never grabbed the title monthly. Still, with The Mighty Thor #705 being the beginning of the end, I knew I had to check it out. And I’m so glad I did. Even if you’ve never read an issue of Jane’s tenure as Thor, this one is sure to make you a fan. Thor isn’t going down without a fight, and this is the fight of her life. There’s a melancholy behind the battle between Thor and Mangog, but still this issue feels hopeful. That’s due to Aaron giving Thor what is truly a top-notch heroic moment, emphasizing how it isn’t powers or strength that make someone a hero, but what they do with them. Dauterman’s artwork has always been incredible, but add in Wilson’s colors and the whole issue just looks tremendous; every panel becomes a painting.

If you haven’t read any of The Mighty Thor (or even the earlier Thor run) now is as good a time as any to jump on board. Before she dies, there’s still time for Thor to prove to everyone just how worthy she is.