When women around Burnside are being mysteriously attacked and the only clue is one confused boyfriend’s report of some kind of purple slime monster in her shower, Batgirl is on the case. Unexpected help arrives in the form of Police Commissioner Gordon, who followed the same clues to an apothecary in Burnside. Where the trail leads next is anyone’s guess!

Novel as it is to see a Batgirl story where Barbara Gordon teams with her father that isn’t based around an artificial “Will my dad find out my secret identity?” conflict, Hope Larson’s plotting is otherwise sloppy. No reason is given for the creation of the monster at the heart of the story other than it being a random fluke and an excellent opportunity to talk about the evils of companies dumping strange chemicals in the water.

While I’m willing to allow for anything being possible in comic book science, a make-up company accidentally creating life with a face-wash formula is more than I can believe. Throw in some sloppy artwork from Scott Godlewski (who seems to have some trouble with drawing eyes and depicting details beyond close-ups) and some odd color choices from John Rauch and this is one Bat-Book that can be easily skipped. The main redeeming factor is that Larson does a great job depicting Batgirl and Jim Gordon and the scenes of them working together are truly touching.

The drama which has recently consumed Detective Comics could rival that of any scripted series in this “Golden Age” of television. It has been a roller coaster of emotions and the Bat-Family is fracturing more and more every day.

The latest installment, Detective Comics #977, opens with a glimpse of the dark future which has haunted the team since a future-Tim Drake came back in time to warn them of it. He was quite the deranged character, having been driven mad by continuing Batman’s crusade, but the details of the grim future that sees Batwoman murdering Batman is enough the rattle the whole team. Otherwise, this issue is more or less has its character in a holding pattern: Batman doesn’t want to rebuild the Belfry; Red Robin wants to reestablish the Gotham Knights; Batwoman is learning how to work within the Colony alongside Batwing and Azrael; Orphan continues to grieve.

This is obviously a calm before the storm, with moments of introspection between characters as they prepare best they can. And with how this issue ends – with outside forces pushing the fractures Bat-Family against one another – it’s sure to reach full scale war before too long.

The art duties in Detective Comics #977 are split between the opening flash-forward and the rest of the issue’s present setting. This is a great choice because it marks a distinction between who these are characters are now and who they might become. The coloring, however, stays fairly consistent in style, evoking the gloominess of Gotham that’s being reflected in these brooding heroes – whether now or then, the pain and guilt remains.

Detective Comics isn’t just a flagship title for the DC Comics, it’s by far one of the best series they’re publishing. If you’re reading only one Bat-related title, it better be Detective Comics. 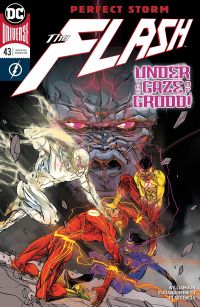 The good news is Barry Allen has restored his powers. The bad news is that, in doing so, he has given Gorilla Grodd access to The Speed Force and control over the minds of his allies! Can Barry Allen think fast enough to come up with a solution before Grodd takes over his mind as well?

Unfortunately, “The Perfect Storm”  storyline started running out of energy last issue and The Flash #43 does little to get things moving again. Joshua Williamson seems to be running in place, with the ultimate stakes of the story – Grodd’s control of The Speed Force – not having changed for several issues and the plot being continually delayed by contrivance after contrivance, all to give Barry Allen a new sense of hubris that doesn’t sit well with the character.

The good news is that regular artist Carmine Di Giandomenico is back after several issues of fill-in artists who either didn’t fit the aesthetic of The Flash or, in a bit of irony, rushed their work. Di Giandomenico’s style is an acquired taste, but the visual conceit of depicting the speedsters with squiggly lines to suggest their continual motion is a marvelous conceit. It just works much better in a story where not ALL the characters are moving at super-speed.

With the battle in Delhi settled, Bruce Wayne is ready to reestablish a war council that can help finance the building of a better world. Unfortunately, an assault on Wayne Manor will demand his attention and lead to an explosive confrontation.

As a reader, I love Tom Taylor’s cliff-hangers. As a critic, I’m annoyed because his stories defy easy summation and there’s no way I can talk about Injustice 2 without spoiling the story for potential new readers beyond saying “You have to read this!”

Let us just assume I said, “You have to read this!” and move on.

In terms of art, this issue is equally impressive. Bruno Redondo is one of the most underrated talents at DC Comics, delivering intricate line-work without allowing his panels to become cluttered. Juan Albarran finds the perfect balance between outlining and enhancing those pencils with his inks. Rex Lokus’ colors are vividly vibrant and Wes Abbott’s letters subtly emphasize the voice of each speaker.

There’s no corner of the DC Comics universe that’s prospered as well as Atlantis has throughout the publisher’s last decade or so of restructuring. From the New 52 through Rebirth, the Aquaman title has continued to be strong no matter the creative team. Arthur Curry has certainly gained in popularity thanks to this, but it’s his partner, Mera, who’s become the real breakout star.

However, Mera: Queen of Atlantis #2 has Mera sharing the spotlight with Arthur’s half-brother, Orm AKA the villainous Ocean Master, and while it’s an interesting decision, it does derail the issue just a bit. Granted, neither of the series’ two issues have made it entirely clear what Mera is supposed to do while Arthur leads a revolution again King Rath and she’s trapped on the surface, convalescing. So having Mera and Orm come to blows seems like an all right way to pass the time. Of course, their tense discussion and later fight doesn’t Mera’s need to heal any favors, but it does lay the groundwork for a team-up between the two. Can Arthur’s traitorous half-brother and his surface-stranded fiancée put aside their differences and work together?! Tune in to Mera: Queen of Atlantis #3 to find out!

What doesn’t falter in this issue is the artwork, with Medina, Rapmund, and Gandini tackling both a measured conversation as well as the brawl with real finesse. The emotions from both Mera and Orm are as clear as day as the two discuss how much they’ve changed in recent years, and when their tempers flare, watch out, because that anger is palpable. In particular, there’s a phenomenal page of Mera retaliating with her fury on full display; even the ocean feels filled with her rage as she yells “How DARE you strike the Queen!” It’s fantastic.

Mera: Queen of Atlantis #2 is another solid entry in what’s shaping up to be a great first mini-series for the newly dubbed Queen, even if it comes across as Orm trying to steal the limelight. (Which, frankly, is such an Orm thing to do.)

Tabitha and Selena are hot on the trail of the fugitive Bubba, but can mother and daughter put aside their bad blood long enough to survive the attack of the rival bounty hunters who aim to take them out as well? Probably not, as Tabitha recalls her warped teen years and the neglect that made her rebel against her reality star mother.

Good as it is to have original artist Rachel Stott back, the shock value that drove the first two issues of this series is starting to wear a bit thin. You can only dance on the edge for so long before you go over or fall back and Motherlands is not quite ready to go over the edge. Unfortunately, that’s the only edge to be found in Si Spurrier’s script, which abandons much of the dark humor of previous issues in favor of action. That being said, it is good action and  Stott’s artwork makes up for a lot.

Sheena has discovered the mysterious huntress whose every step brings rot and decay to the jungle only to discover a strange tale tied to her own origins. Meanwhile, the corrupt forces behind Caldwell Industries seek out The Jungle Queen for their own dark ends.

I had hoped after Sheena #6 that the tide might be turning on this series, as I’ve enjoyed Marguerite Bennett’s writing in the past. Unfortunately, her efforts – with Christina Trujillo – to revamp the Steven E. De Souza revamp fall flat and are made worse by Maria Sanapo’s artwork. The only thing that keeps me from giving this a lower rating is my suspicion that I might not be quite so annoyed by this series if I were coming into it fresh and weren’t familiar with the characters and backstory this series is destroying.

The revelations regarding Sheena’s origins made in this issue are as unnecessary as they are nonsensical. We are told that Sheena is apparently the lost scion of some other tribe’s line of holy women, yet their traditions are identical to the tribe Sheena was raised by and Sheena bears the same title of Mayatana. The huntress has apparently been searching for the missing children of her tribe and several others for decades, yet Sheena’s tribe is totally unaware of this. Of course there is every chance that the huntress is lying, but other events in the story make it clear that she isn’t.

What makes this all even more unbelievable is Maria Sanapo’s depiction of The Huntress. Despite being several decades older than Sheena and her companion Lirio, The Huntress looks an age with them, except for when Sanapo occasionally draws bags under The Huntress’ eyes. Throw in expressions that don’t match the dialogue, forced poses that don’t fit the action and you have one comic I won’t make the mistake of picking up again.

Facing an ambush in the middle of Maul-Mart – a secret super-store for assassins – The Silencer must face a small army in order to escape with her life and pick up her son from daycare!

Even with the talent involved, I wasn’t expecting to like this series as much as I do. I’m usually not much for over-the-top action or stories involving assassins, but Dan Abnett’s ability to develop even the most basic characters beyond traditional action movie cliches makes Honor Guest stand out. Couple that understanding with some fantastic artwork as John Romita Jr. does what he does best, with the assistance of Sandra Hope, Dean White, Arif Prianto and Tom Napolitano and you have one fine comic.

Faced with a dire warning of cosmic peril, Mister Terrific is ready to act. But first he must escape from The Dark Multiverse with the aid of Phantom Girl, Metamorpho and Plastic Man. Even should they manage that, the complications from their trip into another dimension may be just starting…

Though meant to evoke the spirit of Jack Kirby and Stan Lee’s Fantastic Four, I found myself thinking more of Steve Ditko’ Doctor Strange as I looked at Ivan Reis’ artwork for this issue, filled as it was with weird proportions and twisted imagery… and I don’t just mean Plastic Man! Jose Luis’ art in the final pages looks more traditional but is no less skillful. Jeff Lemire proves equally able when it comes to script such creative action. If you haven’t given this series a shot, do so!