Ten years ago, Iron Man released and with it came a post-credit scene in where Nick Fury approaches Tony Stark about something called, the Avengers Initiative. Iron Man director, Jon Favreau recently shared with EW that the scene was initially thought of as “a bit of a lark” and intended as one of many “Easter eggs that the fans would appreciate.” But quickly, while working on the dialogue for the scene with producer Kevin Feige (who according to Favreau “lit up” at the idea of the post-credit scene) it became apparent the scene could be so much more.

“We were very careful how we selected the words. ‘You’re part of a bigger world now, a bigger universe,’ and ‘the Avengers Initiative,’ laid breadcrumbs for what was to come. We had the idea that we would somehow group these characters together, that was part of what would happen, but a lot of things had to go right for that to happen, so we were really just laying out a basic mission statement of purpose, to show our intent, and thinking that the few people who would linger in the theater would be the ones who would appreciate it most.”

Ten years later, those few people who lingered have grown into a massive worldwide audience on who the cultural impact of the Marvel Cinematic Universe cannot be overstated. It has changed the entertainment industry – for both good and bad – and it has changed how we, the audience, engage with our entertainment. Favreau and Feige didn’t know what a landmark moment in movie history they were working on when they wrote that Iron Man post-credit scene, but their “basic mission statement“, their Avengers Initiative changed everything.

I bring all of this up because with a movie like Avengers: Infinity War, it’s impossible to separate the movie from the moment it exists in. The hyperbole and the hype and the hoopla surrounding this movie’s release is almost its own character in the narrative. It’s hard to fairly judge Infinity War as a movie because it isn’t just a movie – it’s part one of an epic finale for a series that’s spanned a decade, earned billions and billions of dollars, and has captivated movie-goers in ways few films ever do. To even begin bringing the MCU to a satisfying conclusion (while also setting the stage for future films) is an incredibly tall order for any movie to fill, but Avengers: Infinity War comes close. 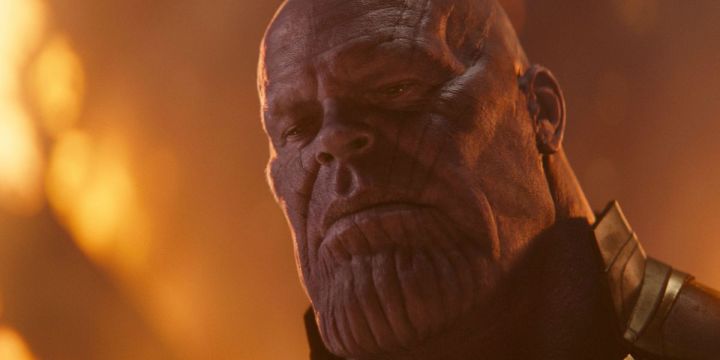 Thanos is finally making his move to collect the Infinity Stones he needs to enact his grand plan for the universe – complete and total balance, something which he hopes to achieve by indiscriminately killing half of the universe’s population. All that stands in his way are the Avengers and their many allies. They are the last stand between Thanos and his wish to eradicate half of existence.

Infinity War is stuffed. It’s so stuffed with characters and callbacks and plot points and quips and kicks and punches it can barely be contained by its two hour and 39 minute runtime. Thankfully, the Russo brothers as well as screenwriters Markus and McFeely are no strangers to juggling all these elements. This is the creative team responsible for one of the greatest superhero films of all time that happens to also have an incredibly large cast, all of whom eventually take part in a giant battle at an airport and it is one of the most beautifully comic book-y things ever put to film.

Structurally, Infinity War bends under its own weight but never breaks and that’s thanks in large part to the decision to frame the story around a single character – Thanos. That may seem odd at first, but Infinity War is all the better for having Josh Brolin’s Thanos as its anchor. Brolin brings a gravitas to the big purple guy whose spent the better part of a decade just floating ominously in his chair somewhere off in space. He doesn’t play him as overly sympathetic, but he isn’t strictly evil either. Thanos looks on ridding the universe of half its inhabitants as a heavy burden that only he has the will to bear. He doesn’t take any enjoyment in killing so many, but he feels absolved by his belief that murdering half of the universe is the only way to truly save the other half. And for a cinematic universe that’s struggled at creating compelling villains in the past, Thanos is another in a list a recent villains (Vulture, Hel, Killmonger) who are as interesting if not more so than the heroes the fight.

Infinity War is at its best and most entertaining whenever it can revel in the fun of being a big crossover. This is the very core of the MCU’s appeal and Infinity War gives us crossover in spades. Tony Stark banters with Dr. Strange; Thor pals around with Rocket and Groot; Cap and Black Widow fight side-by-side with Black Panther and Okoye; these moments are a delight and where Infinity Wars gets to be downright hilarious (notable laughs being the clash of egos between Stark, Strange, and Star-Lord or Thor meeting the Guardians). Still, Thanos’ quest is the film’s framework and these scenes play more like vignettes, allowing Infinity War to every so often lighten the mood before getting back to the serious business of hunting Infinity Stones.

This isn’t to suggest that the heroes are only here to score some laughs – several (though not all) have arcs with real emotional payoff. Robert Downey Jr. is again made to grapple with Stark’s unrelenting guilt, and his continued mentoring of Tom Holland’s Spider-Man is a real highlight. Scarlet Witch (Elizabeth Olson) and the Vision’s (Paul Bettany) relationship plays a central role, and while they’ve had limited screen time to develop that relationship, they’re still able to convincingly portray a loving couple faced with an unthinkable choice. Just about every character is given a moment to shine, with standouts being Benedict Cumberbatch’s Dr. Strange, Chris Hemsworth’s Thor, Rocket as performed by Sean Gunn and voiced by Bradley Cooper, and again, Holland’s Peter Parker.

A few characters do feel a bit undeserved by Infinity War; specifically, Cap, Bruce, Black Widow, and the cast of Black Panther, but that may be a symptom of Infinity War being only the first part of a two-act story. The relationships between Thanos and Gamora, not too mention the romance between Gamora and Peter Quill, also never feel as defined as the film want them to be, but these are minor drawbacks that don’t necessarily hurt the movie as whole.

Visually, Infinity War is by no means Marvel’s best work, but it also isn’t their worst. The action sequences are pretty spectacular, as we’ve come to expect of Hollywood blockbusters, but with so many characters involved, there a moments that become a bit jumbled. This is most noticeable during the final battle in Wakanda where the Avengers once again must battle a faceless horde of alien soldiers. As for the digital effects work, it’s a mixed bag. The digital rendering of Thanos off of Brolin’s motion-capture performance works really well, but the same cannot be said of Thanos’ subordinates, the Black Order. In fact, outside of Ebony Maw, the Black Order is forgettable in both appearance and action. The design for the film’s various off-world settings, like Titan or Nidavellir, aren’t bad but also aren’t very remarkable, and the same could be said of Wakanda. For the most part, Infinity War‘s visual effects are good, but they aren’t great. (And why does Mark Ruffalo’s head sticking out of the Hulkbuster armor looks so bad?)

Avengers: Infinity War is an impressive achievement. The ways in which it can blend the personalities and motivations of its ludicrously large cast, creating from that cocktail a cohesive narrative that not only feels appropriately epic but meaningful is pretty incredible. What happens in this movie matters and it matters a lot. Sure, not absolutely everything works, but it’s hard not to appreciate the sheer ambition of it all. Ten years later, and the MCU continues to captivate audiences in ways few movies ever do or will.