Many people took it hard when Wonder Woman and Superman fell down the slippery slope of good intentions and became world-conquering tyrants in the name of forcing peace upon The Earth. Few took it harder, however, than their proteges, Cassandra “Cassie” Sandsmark and Conner Kent – a.k.a. Wonder Girl and Superboy. For years they were trapped in The Phantom Zone, helpless to do anything but watch as their mentors became more and more depraved.

Now, the two are free of their inter-spacial prison. And the world is more in need of a Superman and Wonder Woman than ever before.

To that end, Cassie and Conner intend to reform The Titans, with Starfire as their first recruit. Now they are in search of Jaime Reyes – the new Blue Beetle, who assisted them in helping save the city of Delhi from Amazo.

They aren’t the only ones looking for Jaime, however, as the intergalactic bounty hunter known as Lobo, Scourge of The Cosmos, has come to Earth to claim the price on the new Blue Beetle’s head! 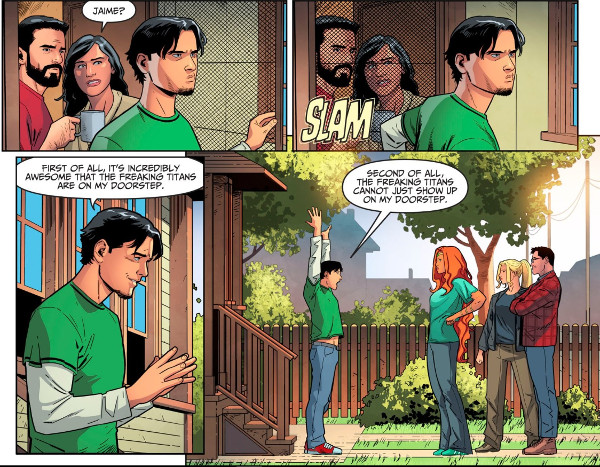 While Kevin Maguire didn’t draw the cover of this issue of Injustice 2, this book is born of the same chaotic, care-free spirit as the classic Justice League comics which Maguire worked on with Keith Giffen and J.M. Dematteis back in the BWA-HA-HA-HA! era of the book. Granted, that may be partly due to the presence of Booster Gold and Lobo, but I suspect the aura would be there even without them.

Bruno Redondo has a gift for expressive faces and frantic physicality that compares favorably to Maguire’s. Despite this, Redondo’s style is all his own, boasting a streamlined aesthetic that nevertheless fits in a considerable amount of fine details. There’s also more than a few funny sight gags in the background for eagle-eyed fans, amid the eventual slap-stick of the action sequences.

Colorist Rex Lokus and letterer Wes Abbott aid Redondo ably in bringing Tom Taylor’s script to life. Taylor is one of the funniest writers working in the business but his scripts also contain an element of fun that many writers fail to capture when they are writing a story involving superheroes. Taylor also has a great handle on Booster Gold, who far too many writers write as a complete imbecile rather than an impulsive jock.

It’s a fair bet that this issue will appeal to those Young Justice fans who miss seeing Connor and Cassie in the mainstream DCU, everyone who misses Blue Beetle in any capacity and fans of Booster Gold and Lobo. And if you’re not a fan of these characters and the creative team, you will be by issue’s end.