Oliver Queen was once a rich, spoiled playboy. That changed after he found himself stranded on a deserted island and was forced to fight for survival for the first time in his life. Discovering something within himself, as well as his family’s connections to a far-reaching conspiracy, Oliver Queen chose to become something else – a hero.

As Green Arrow, he won the respect of The Justice League and was offered a place at their table. He declined, preferring to focus on street-level crime and the sort of evils that didn’t fly around in the sky making themselves obvious. He did agree, however, to be “The Secret Fist” of The Justice League – their unknown agent whenever they needed the skills of a hunter or a shot no one would see coming.

Now, with most of The Justice League abducted by Brainiac and the rest of Earth’s heroes fallen into comas following a massive psychic attack, Oliver Queen may be the last hero on Earth. Certainly he’s the only one who seems to be in any position to do anything when a Brainiac drone attacks his hometown of Seattle while he’s in the middle of chasing down the crime-boss Brick. The trail to those responsible for leaving Earth defenseless will lead Oliver Queen to a confrontation with another old enemy – Task Force X Coordinator Amanda Waller! 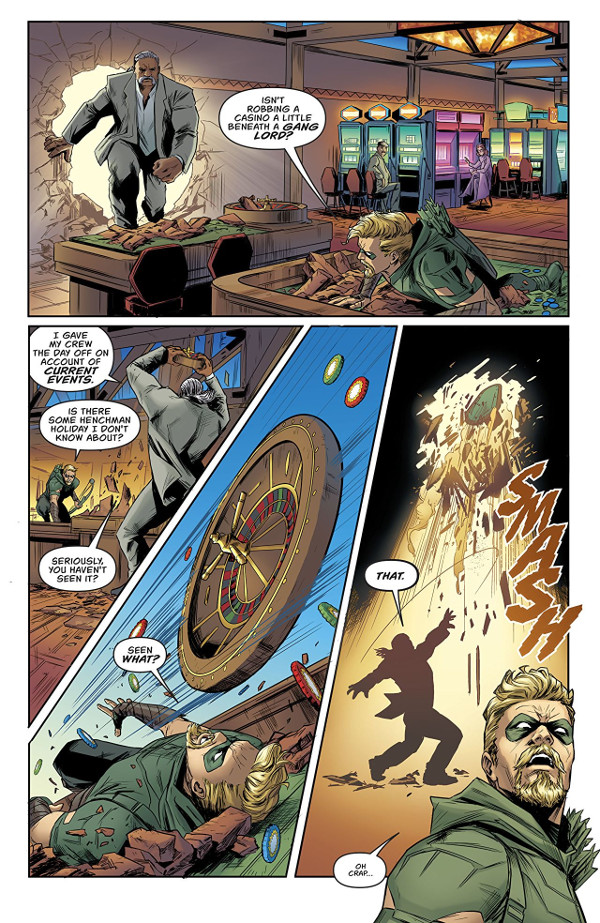 Spinning out of the pages of Justice League: No Justice, Green Arrow Annual #2 is to that series what Rosencrantz and Guildenstern Are Dead was to Hamlet – another angle on the same story. The drama here is far more personal, however, and that’s largely due to the writing of Julie and Shawna Benson.

The Benson Sisters excel at telling tense, action-packed stories filled with unique personalities and they have a fantastic handle on Oliver Queen’s character. This is no surprise to those of us familiar with their work on Batgirl and The Birds of Prey. Fans of that series would do well to check this issue out as a familiar face (and not the one you’d expect!) has a major supporting role to play.

The artwork is as amazing as the story. Carmine Carnero had a brief but fantastic run on Detective Comics recently and her work here is equally impressive. Paired with the colors of Trish Mulvihill, there’s not a single bad-looking panel or page in this issue. Indeed, the only bad thing about the artwork in this book is that Carnero’s detail-driven yet utterly fluid style is so utterly perfect for depicting the adventures of Oliver Queen that it’s sickening that she won’t be joining The Benson Sisters when they take over the monthly Green Arrow comic in July. Perhaps she can return later on?

Regardless, Green Arrow Annual #2 manages the neat trick of being an accessible continuation of the story of Justice League: No Justice and a pitch-perfect introduction to the character of Oliver Queen and the status quo of his life in the reality of DC Comics Rebirth. If you haven’t been following Green Arrow before, this is the issue to start with.