When it was announced that Marvel Comics mainstay Brian Michael Bendis was leaving the comic company he’d worked for almost exclusively for two decades to sign a contract with DC Comics, it was a big deal. Then came the advertisements proclaiming that BENDIS IS COMING and the announcement that BMB was being given carte blanche to do as he wished with the Superman family of comics and that everything would be changing in a way that would redefine the mythology of Superman forever.

A short story in Action Comics #1000 gave a hint at what was to come, introducing a new villain named Rogol Zaar. Seemingly stronger than Superman, he had a mad-on for the Kryptonian race and claimed to be responsible for Krypton’s destruction.

The worst parts of The Man of Steel #1 are focused upon Rogol Zaar, as we see him at some point in the not too distant past, pleading with various cosmic powers (including one of the Guardians of the Universe) as to why a Kryptonian genocide is necessary. Predictably, Rogol Zaar fears the Kryptonians and their advanced science and foresees a day when The Kryptonians will become an unstoppable race of imperialist scumbags. The irony that he preaches the virtues of genocide in order to stop future atrocities passes without comment.

This is the grim irony of The Man of Steel #1. The parts devoted to Rogol Zaar are dull as dishwater. The precise motivations of this character may have changed, but we’ve seen him before. We’ve seen him every other time some writer came along, saying they were going to change the mythology of Superman forever and attempted to do so with some big, bad villain who was even more powerful than Kal-El of Krypton. By constrast, the best parts of The Man of Steel #1 come when Bendis just shows us Superman being Superman.

Bendis’ greatest strength as a writer has always been his ability to humanize his characters and bring out the humor inherent to the absurdity of superheroes. For instance, there’s one fantastic sequence where Superman, in the middle of listening for trouble while on his nightly patrol, overhears a woman singing a cover of a song he can’t quite place. It’s a neat little reminder of Superman’s powers and that for all of the negativity he is exposed to on a daily basis, he also gets to share in a lot of the joy of the people around him. It’s also funny having Superman briefly obsess over trying to remember the name of this song. 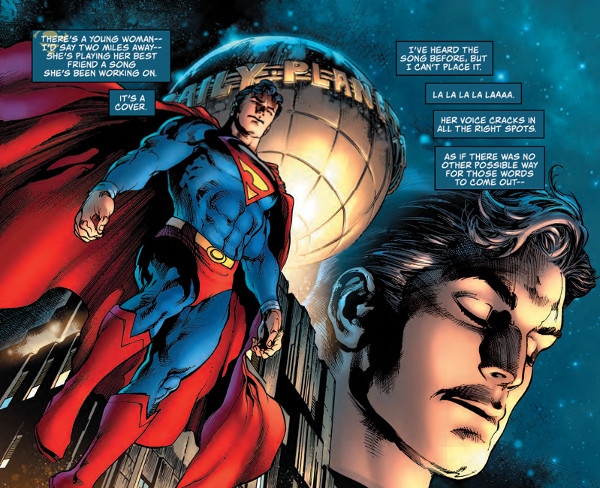 Bendis also manages the neat trick of writing a Superman who has a sense of humor, who pokes fun at the villains he’s facing without coming off as mean-spirited. I honestly heard Christopher Reeve’s voice in my head reading some of the dialogue in this issue and could have done with more scenes involving Clark Kent interacting with his wife and son than Rogol Zaar’s brooding.

The artwork is similarly mixed. Ivan Reis and Joe Prado are both fantastic creators but I don’t think they work well together. There are some pages where Reis’ pencils are obscured by Prado’s inks and lost completely among Alex Sinclair’s colors. The book doesn’t look bad by any stretch, but the strongest pages are the final two, which were drawn and inked by Jason Fabok.

The Man of Steel #1 is a solid Superman story but nothing more than that. The bits focused on Superman being Superman are fantastic. The parts involving the new villain are beneath the creators involved. So far, this series is proof that Superman doesn’t need to be redefined for a new generation of readers – he needs to have what he already is looked at in new and unique ways.