Fantastic Four was one of the most revolutionary comic books of all time. It was the first Marvel Comic to distinguish itself as something different, presenting characters who defied the usual stock stereotypes of pulp fiction at the time. Though Stan Lee and Jack Kirby had depicted noble monsters before in their pre-CCA horror titles, they never did it quite so eloquently as with Benjamin J. Grimm, the ever-lovin’ blue-eyed Thing. Johnny Storm acted like a real hot-tempered teenager, Reed Richards’ wisdom was tempered by his arrogance and pomposity. And Sue Storm… well, eventually she was changed into something beyond “The Chick.”

Sadly, an act of spite broke apart Marvel’s First Family. The continuing battle between Marvel Studios and Fox over the film rights to all the properties that studio had bought decades ago led to Marvel Comics briefly trying to eliminate every comic series whose characters’ film rights were held by Fox. While they didn’t completely destroy the X-Men line (they were spiteful, not stupid), they did start trying to hype the Inhumans over the X-Men and quietly sent Reed and Susan Richards into comic book limbo while The Thing joined The Guardians of the Galaxy and The Human Torch joined The Inhumans.

Thankfully, with Fox now having been bought by Disney and plans officially underway to bring the wayward franchises into The Marvel Cinematic Universe, the time is now ripe for The Fantastic Four to join together and a new age of heroism to begin in the Marvel Universe! 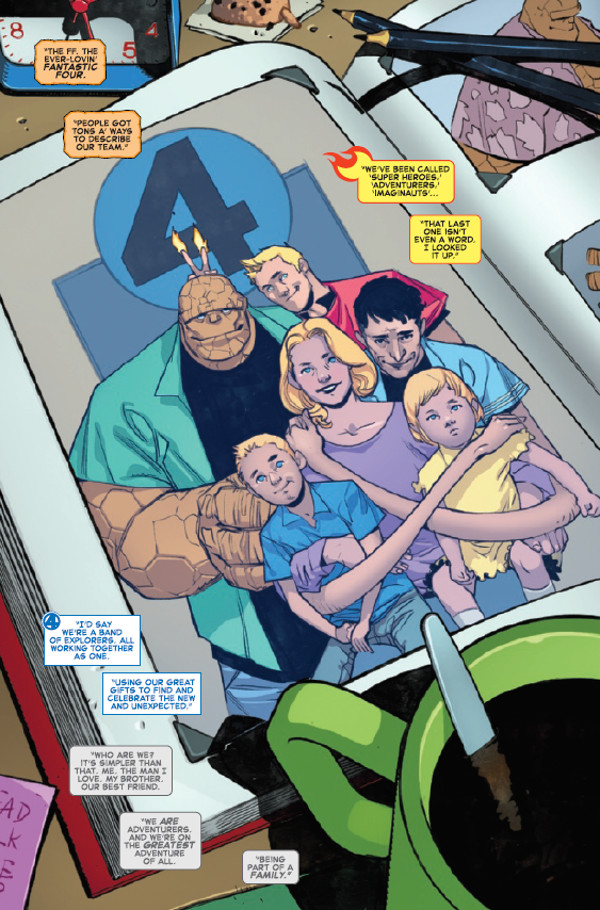 Well, eventually we may get that. Fantastic Four #1 doesn’t see the team reunited, despite all the many glorious variant covers showing The F4 back in action. In fact, there’s very little in the way of action in the main part of the book. This issue does, however, take the first steps to that eventuality. To say more would say too much. Those who are upset by this will be glad to see their complaints mirrored and their concerns answered in a short Skottie Young comic where The Impossible Man expresses his disappointment that The Fantastic Four have not yet returned.

So what is this issue about then?  Mostly Dan Slott showcasing the hilarious bromance between The Human Torch and The Thing. This plays to Slott’s strengths as a great comedic writer and he writes Johnny Storm and Ben Grimm true to form. This proves no surprise given his experience with the characters in The Thing‘ solo series from several years ago and the highly underrated Spider-Man/Human Torch: I’m With Stupid mini-series. This section is beautifully illustrated in an animated style by Sara Pichelli.

The best part of the issue, however, is the back-up story depicted in a darkly decadent fashion by Simone Bianchi. Here we see Victor Von Doom, suffering the gigantic melancholies that besiege all great men, when a member of the Latverian Resistance seeks him out. Evil forces have taken over Latveria in Doom’s absence and his loyal followers are endangered by the robots Doom once built to protect them. This spurs Doom into action, despite his wounded body and spirit, for he cannot sit by idly when his people are in need of their champion.

In a few brief pages, Slott and Bianchi perfectly capture the grandeur of Doom and how, in many ways, he is a far more heroic figure than anyone in The Fantastic Four. While they concern themselves primarily with their family and the goals of furthering Reed Richards’ research for its own sake, Doom honestly works toward greater ends on a larger scale. While it’s debatable how much of that may be born from pride in being a good ruler on Doom’s part, it cannot be denied that he is a good ruler and a true leader. That alone promises that this new Fantastic Four will be well worth reading.