Two months have passed since the incident that nearly destroyed Ven-Tech Tower and The Monarch’s fortunes have changed for the worse. Far from being lauded as the hero (er, villain!) who destroyed The Blue Morpho, he’s found his ranking within The Guild of Calamitous Intent lowered and has once again been denied the right to be the official arch-enemy of Doctor Venture. To add insult to injury, he’s been assigned to some lame super-scientist named Dr. Von Helper. These are all annoyances, true, but petty ones compared to the revelation that the trust fund that financed his super-villain lifestyle has finally run out.

Meanwhile, Dean Venture has moved out of his father’s headquarters and into the dorms at Stuyvesant University. And Hank has moved into Dean’s room, intent on turning it into a new bachelor pad for himself and his girlfriend Sirena to enjoy. Unfortunately, Hank’s clingy nature has started to wear on Sirena’s nerves and she’s seeing a lot more of Dean around the campus… and liking what she is seeing.

Dean hasn’t noticed, however, being wholly focused on his studies and trying to get out of his father’s shadow and away from super-science and costumed villains – not an easy task since his dad changed his schedule so he’s taking nothing but science classes! Dean tries to change his schedule but is persuaded to keep at least one science class – Introduction to Botany with Dr. Von Helper as the instructor… and Sirena as his lab partner! 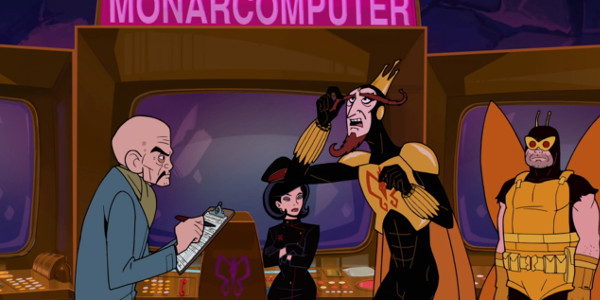 There is a reason why Hank and Dean have become less and less important to the ongoing story of The Venture Bros. as time has gone by – they are nowhere near as interesting as most of the supporting cast.  “The High Cost Of Loathing” is a reminder of this, as we return to well-covered territory regarding Dean’s desire to live a normal life, Hank’s desire to revel in the glory of being a Venture and their father’s total obliviousness to both of those facts. Any new territory that might be plumbed by Dean moving into the dorms and Hank developing an honest relationship with a girl is quickly abandoned in favor of more of the same old-same old and the viewer is likely to share Dean’s resigned frustration when The Monarch inevitably disrupts his first botany lesson.

It seems that most of the cast and their respective voice-actors are being wasted this week. After helping Dean to move, Patrick Warburton has little to do as Brock Samson. Doctor Venture is strung out on pain killers and asleep for most of the episode, leaving James Urbaniank idle. Doc Hammer doesn’t do much beyond giving one pep-talk as Dr. Mrs. The Monarch. Nathan Fillion (who voices Dean’s new roommate, who is secretly the spider-themed superhero Brown Widow) is barely in the episode and his appearance here may be his shortest cameo to date. Even the always excellent Gary Cole barely makes an impression as Professor Von Helper!

The episode’s one saving grace is The Monarch subplot and most of that is due entirely to the fact that there’s some sense of motion there. Granted, everything is regressing somewhat, but the sudden loss of funds presents a new angle that makes this different than when The Monarch was working his way up the ranks of The Guild back in Season 3. Even so, the scenes with The Monarch are few and far between and even they do little to alleviate the boredom of Dean once again angsting over his life and Hank playing Esau to Dean’s Jacob in their father’s eyes.