Remember last week when I gave a good review to the pilot episode of The Purge? Oh, what a difference a week makes!

This week, we pick up immediately where the first episode left off, with the action of “Take What’s Yours” adding little layers to each of the main character’s stories. And by little, I mean seriously little, because barely anything happened in this episode other than seven commercial breaks in a one hour time-frame.

Yes, I counted them.

If there is one word that best describes this episode, it would be padding. After setting up some potentially suspenseful moments in the pilot, this second episode concerned itself with extremely boring exposition that seemingly served no purpose but to stretch out this episode and fill the demand for a ten-hour mini-series event. That said, a few important things were revealed in the course of this episode.

We find out, for instance, that hospitals and emergency rooms are off limits during The Purge and there are a few dispatched medical crews, with special permits, who are immune to attack outside of the hospitals. However, they seem to be few and far between, with limited supplies or experience. This does address a major question fans had about the world from the movies and how emergency medical facilities could realistic be entirely shut down during The Purge.

Jane’s story officially gets interesting this week, as we finally discover her back story. She was hired on at her company by Don Ryker (William Baldwin), but he skips over her when it comes to promotions and company celebrations because she refuses to accommodate his sexual advances. This leads us to the revelation that the woman Jane interacted with in the first episode is a hit woman Jane hired to go after her boss during The Purge, so no one would find his death suspicious. 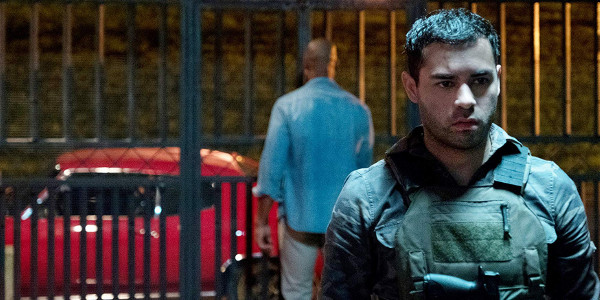 As for Miguel and his sister Penelope? This week, they are the least interesting element of the story. While searching for his sister, who is still inside of the blue bus with the cult being all…culty, Miguel is captured off of the street to be put through The Gauntlet – a dangerous maze where, if he gets out alive, he wins his freedom. The event is being broadcast on television at the NFFA party, and the reason is… well, never explored really.

This is the moment where the aforementioned padding comes into play. The episode attempts to create a violent, suspenseful moment, like you would find in the movies. Unfortunately, the whole Gauntlet sequence comes off as a Rushmore Academy Performing Arts Club production of The Running Man. Only not as entertaining. Or whimsical. Or interesting.

On top of all this, we are given bookend moments of a man in a metal mask listening to a talk radio show. These scenes have nothing to do with the rest of the plot of the show and just come out of nowhere. No name. No identity.  No nothing. There had better be a point to this guy.

I am honestly hoping this week’s episode was a fluke. Thankfully, the exposition on Jane’s story was a tad more engaging than the rest of the plot, which had all the appeal of the lukewarm cauliflower at Golden Corral. Let’s hope this show gets better or I may have to purge it from my viewing schedule.