I said two weeks ago that “Hawk and Dove” felt like an episode of an entirely different superhero show that had its storyline taken over as part of a horribly ill-conceived crossover. “Doom Patrol” has a similar feel, though this time the feeling that we have walked into an entirely different show was intentional. Even before the first episode of Titans aired, it was said that one episode of the series was intended to serve as a pilot for a Doom Patrol show and that series was approved and filming before DC Universe was available to subscribers.

It is hard to say why “Doom Patrol” works so well. Maybe it is because the script seems more focused, having been penned by a single writer and by no less a personage than former DC Entertainment president Geoff Johns at that. Maybe it is because, unlike the dour introduction to most of the Titans in the first episode, “Doom Patrol” has moments of joy to balance the sadness, such as the zeal with which Negative Man dances as he is cooking dinner for the rest of the team. Or maybe it’s because this episode largely abandons the story of the series so far, apart from a few scenes featuring Dick Grayson: Murder Hobo With A Badge beating up a local hunter for information on the runaway Rachel Roth.

The scenes with Dick Grayson and Kory Anders are the only false note in “Doom Patrol,” serving only to remind us that Dick has PTSD from his time with Batman and his anger-management issues are enough to make even the short-fused Kory Anders sit up and take notice. These scenes are not jarring because they are at odds with the image most comics fans have of Dick Grayson. They are jarring because they don’t make Dick out to be any kind of hero, even ignoring my on-going questions as to how a police detective from Detroit is being allowed this much leeway to pursue a single case across the country.

Thankfully, these scenes are brief things and the lion’s share of “Doom Patrol” is rightly focused upon establishing “The World’s Strangest Heroes.” Visually, the team almost seems to have been pulled out of the pages of the 1960s series. Robotman is true to form personality-wise, getting several touching moments where we see former race-car driver Cliff Steele looking at old pictures of himself longingly and asking Rachel to describe the taste of the dinner that he can’t enjoy.  Negative Man doesn’t get as much of a chance to shine apart from the cooking scene, but he does get a nice snarky line when Rachel asks if he is invisible under his bandages and he mutters “Wouldn’t that be nice?”

The biggest change is to Rita “Elasti-Woman” Farr, who is depicted as not having full control of her powers and changing into a formless blob when she doesn’t focus on “keeping her face on.” This is taken from the 2005 Doom Patrol reboot in the comics, seemingly giving the once-glamorous actress a reason for needing to hide away from the world despite seemingly having no reason she couldn’t keep working as an actress in the classic comics. Rita also doesn’t get much development beyond her appearance at dinner, where she tries to maintain the facade of a cultured lady even as she’s pouring gravy over a meal consisting of at least five conflicting entrees. 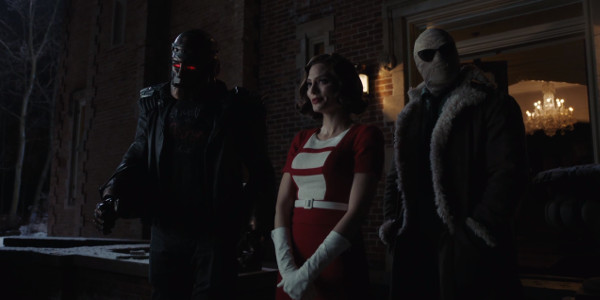 The irony that “Doom Patrol” manages to do in one episode what Titans has failed in four is unlikely to be lost on anyone. Yet the episode’s conclusion does much to instill some hope that Titans is finally finding its feet and moving in a direction towards being something recognizable as a Teen Titans adaptation. If nothing else, fans are likely to be stoked for the upcoming Doom Patrol series.