It’s a fair question. As I’ve noted in previous weeks, every other episode of this series has seemed like it was a crossover episode with another superhero show or a backdoor pilot. In the case of the fourth episode, “Doom Patrol“, it actually was a backdoor pilot. Between whole episodes devoted to introducing Hank Hall, Dawn Granger, Jason Todd and Donna Troy, there’s surprisingly little of the Titans in Titans and it’s easy to imagine that the people making this show wish they were doing something else. It’s a feeling I sympathize with, as I spent a good portion of Titans wishing I were watching something else.

It seems fitting then that the series finale, “Dick Grayson” should completely abandon Titans‘ storyline to date (until the final minute), after ending on a tense cliffhanger last week. Instead of following up on Dick Grayson entering into the farmhouse where Raven just summoned Trigon to Earth, we find ourselves in Los Angeles, where Dick Grayson is enjoying a perfect life married to Dawn Granger, with a loving son, another baby on the way and no worries beyond what color to paint the nursery.

This can’t last, of course, and Dick is soon visited by a wheelchair-bound Jason Todd, who tells him that Gotham is worse than ever. The Joker killed Commissioner Gordon and that, coupled with The Riddler crippling Jason and Batgirl disappearing has pushed Batman to the point where he is seriously considering killing The Joker. It is Jason’s hope that Dick can succeed where he failed and talk some sense into their mentor before it is too late. 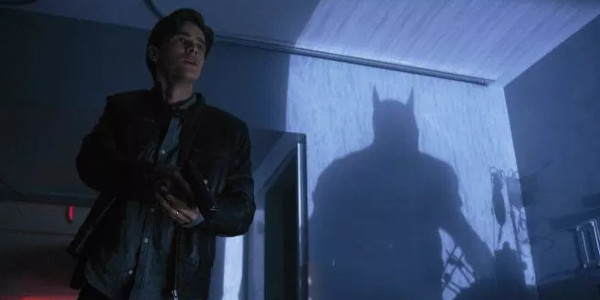 What follows will be old-hat to anyone who has seen the Batman: The Animated Series episodes “Perchance To Dream” and “Over The Edge” or read that classic Alan Moore comic For The Man Who Has Everything. The script by Richard Hatem is highly derivative and even casual Bat-fans will feel like they’ve seen this done before and done better, because they have. It says a lot that DC Universe felt the need to put out a new episode synopsis explaining that this was all a dream engineered by Trigon as a psychic assault on Dick Grayson after releasing the trailer for the finale, because many people honestly wondered if they had missed an episode.

Credit where credit is due, director Glen Winter does a fantastic job filming everything and the production team presents a truly nightmarish vision of Gotham City. It reaches comic extremes, however, as we spend one minute with Dick Grayson in a cab looking at the city and see a street-fight, a fresh crime scene with black-and-white police cars and flashing lights and a line of hookers within a three-block stretch of the same road. And this is in the part of Gotham the cab-drivers don’t refuse to go!

For those who are wondering how they resolve the battle with Trigon in a single episode, don’t bother. They don’t. The episode ends (unsurprisingly at this point) on another cliffhanger that resolves nothing. Presumably the show-runners didn’t feel the need to actually have a proper ending for the first season, since it was renewed for a second season before the first episode even aired?

I was left with two fitting symbols that represent Titans as a whole as I attempted to watch the post-credits scene. The first was that DC Universe’s player kept attempting to take me back to the “Choose An Episode” menu as the closing credits played, despite my pressing the “Watch Credits” button, as if Trigon himself were trying to deny me finally finishing the season. The other is that the WB shield at the very end of the credits is on fire.

Oh, and the post-credits sequence? It sets up two more characters and ends on yet another cliffhanger. Of course.