Regular readers of Kabooooom know that I’m something of a fan of Tom Taylor. From his work on Injustice, which took what should have been a simple video-game tie-in book and turned it into a critically acclaimed New York Times Best-Seller, to his work on X-Men: Red (the only X-Men team book in the last decade I collected monthly), Taylor has proven himself a master writer, able to balance comedy, action and drama in equal measure. Few other writers can make you laugh and make you cry within the turning of a single page, yet Taylor manages this on a regular basis.

Given that, it’s something of a surprise that Marvel Comics didn’t see fit to put Taylor in charge of a monthly Spider-Man title long before now. Because what character demands a writer of such talents more than Peter Parker?

A great Spider-Man comic has to have humor, because Peter is a funny guy both in and out of costume. It has to have drama, because ever since the days of Lee and Ditko the comic was as much about Peter’s love life and his job worries as it was fighting Electro and The Vulture. Depending on the writer, the comics often were more about Peter Parker than they were Spider-Man. And it has to have action, because… well, it’s a superhero book and there’s only so much we can do to defy conventions when it comes to people in tights beating each other up. It’s sort of a tradition.

Friendly Neighborhood Spider-Man #1 is not a great Spider-Man book, but it is a good one with a lot of potential. The chief reason it is denied greatness is because Taylor does not seem to have been afforded the opportunity to cut loose the way he has on earlier series. Everything we see here conforms to the vision of Nick Spencer, the current writer on Amazing Spider-Man. As such, we get very little of Tom Taylor being Tom Taylor and a lot of exposition regarding how Peter Parker is a pariah in the scientific community and is stuck depending on a super-villain roommate to pay the bills.

Thankfully, Taylor is a master of “show, don’t tell” storytelling, so most of this information is conveyed through action sequences and comedy rather than lengthy information dumps. This is where we get to see Taylor shine, through simple sequences that put the “Friendly Neighbor” in “Friendly Neighborhood Spider-Man.” Unlikely as it is that someone might pick up a comic book not having any inkling who Peter Parker is as a person in this day in age, we get to see Peter helping a homeless family, rescuing a father and daughter as Spidey and coping with the roommate from Hell.

Juann Cabal proves to be an ideal partner for Taylor in this enterprise. Drawing a Spider-Man comic requires as wide a variety of skills as writing one and Cabal proves capable of drawing everything Taylor’s script requires, be it a tense action sequence or a slice-of-life comedy. The colors by Nolan Woodard are well-chosen and Travis Lanham does a fantastic job placing the word-balloons in such a fashion that the art is not obscured by the dialogue.

This first issue also includes a back-up story, on which my opinions are decidedly more mixed. The focus here is largely on Aunt May and I can say little more about it without giving away the game. On the one hand, this story reads more like pure Tom Taylor and includes a fantastic sequence in which Peter Parker takes Mary Jane out for a candle-lit dinner on top of a skyscraper. On the other hand, the artwork is more uneven, with the inks by Roberto Poggi being a little thin at times and Marcelo Ferreira’s figures being oddly disjointed at times. 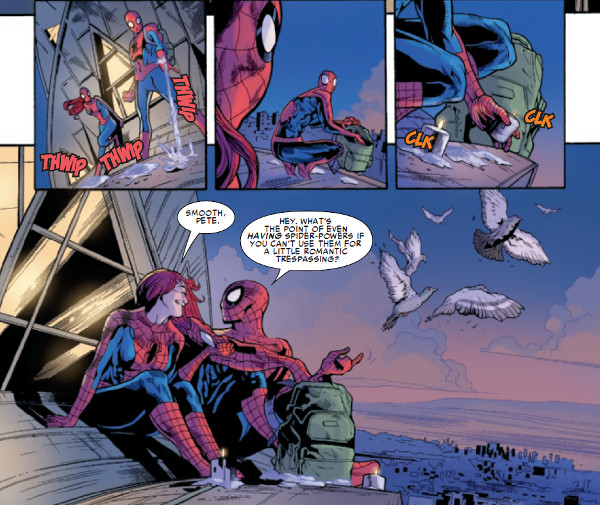 Despite its flaws, Friendly Neighborhood Spider-Man #1 is everything I expected and most of what I hoped for. It is a good Spider-Man comic, if not a great one, but the potential is there for it to become something special. Long-time Spider-Fans will find it enjoyable, if nothing else.