Molly had always been interested in space and science and understanding the universe, even before the night a cute, furry alien crawled into her bedroom and two men in black suits came to her family’s home asking about it. She helped her new friend to get away and saw the men flash some light thing that made her parents forget they were there. But Molly would never forget what she saw that night.

20 years later, Molly (Tessa Thompson) is all grown up and would be a top recruit for the CIA or FBI, except she ruined her psych evaluation by continually asking about “The Other Department.” But Molly is nothing if not persistent and resourceful and her careful monitoring of the skies eventually led her straight into the Manhattan headquarters of the Men In Black. Normally they’d just wipe her mind and be done with it, but something about Molly strikes a chord with the bureau chief, Agent O (Emma Thompson).

Soon Molly is Agent M – a probationary member of the Men In Black, transferred to the London office to undergo basic training. It is here that she is placed in the care of the legendary Agent High T (Liam Neeson) and makes the acquaintance of Agent H (Chris Hemsworth). Once the pride and joy of the London office, Agent H is now a drunken shell of the hero he once was after an incident three years earlier. Yet H’s latest assignment will draw himself and Agent M into a plot involving a mole within the MiB organization and the potential destruction of the Earth itself! 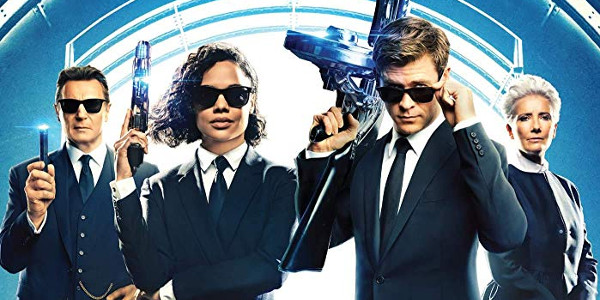 Men In Black: International is less of a reboot of the classic sci-fi comedy franchise and more of a continuation. The movie does make reference to the earlier films, with Frank the Pug and the Worm Guys getting quick cameos and an oil portrait in High T’s office depicting Agents J and K. Beyond that, this is a new story with new agents and new menaces to fight.

Indeed, the movie’s only real flaw is its assumption that everyone seeing this movie has already seen the earlier films. Granted, that is a safe bet, but anyone who comes into this fresh may be confused as to why Molly is using a tabloid in conjunction with her hacking a government space telescope to track a UFO landing. This is the only minor flaw in an otherwise enjoyable movie.

The interplay between Thompson and Hemsworth makes this movie, and while one can see snatches of Thor and Valkyrie from time to time, the two are playing different characters. The movie also changes up the odd-couple dynamic from the earlier MiB films by pairing a jaded veteran who is long past caring about protocol with an eager rookie determined to do everything by-the-book. Hemsworth plays Agent H as a more modern James Bond and pairs well with Thompson’s Agent M, who is more than capable of going with the flow but obsessed with proving her worthiness. 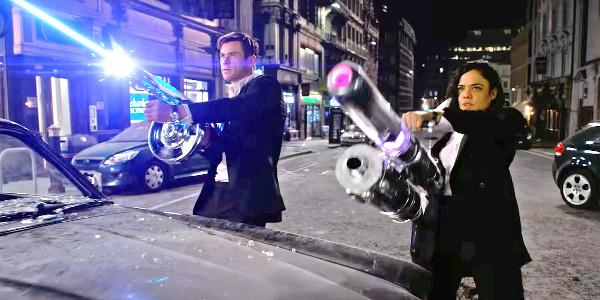 The special effects and make-up for the various aliens are all top-notch and the supporting cast are fantastic. Of particular note is Kumail Nanjiani, who voices Pawny (a diminutive alien who pledges himself to Agent M’s service) and Mission Impossible mainstay Rebecca Ferguson, who plays Agent H’s alien weapons’ dealer ex-girlfriend. (One wonders if they didn’t at least offer the role to Natalie Portman for the irony.)

Men In Black: International isn’t high art and it’s unlikely to be anyone’s favorite movie this summer. Still, for what it is and what it is worth, it’s a fun popcorn movie that doesn’t claim to be anything else.