There was much wailing and gnashing of teeth amidst the horror movie fandom when it was announced that MGM/Orion Pictures had purchased the rights to Child’s Play with the intention of remaking it. I was among those wailers and gnashers. How DARE they and so forth!

Then the news that Mark Hamill was the new voice of Chucky came out, along with the first trailer for the film. So, I decided ‘what the heck?’ Let’s give the reboot a chance.

The 2019 Child’s Play sees voodoo and black magic tossed aside and replaced with technology gone wrong, via a disgruntled employee. The film’s opening introduces us to Kaslan Industries – a high-tech company akin to Google and Apple, which has created an interactive doll named BUDDI. The BUDDI system can interact with any and all other Kaslan products (including self driving cars) and imprint itself onto its owners. One employee in a Vietnamese manufacturing plant for the BUDDI dolls is fired for daydreaming, so he retaliates by reprogramming the doll he is working on for murder and mayhem, right before killing himself.

Cut to America, where single-mom Karen Barclay (Aubrey Plaza) and her hearing-impaired son Andy (Gabriel Bateman) live in a run-down Chicago apartment complex. Karen works long hours at a thankless job at Zed-Mart – our Wal-Mart expy that is also the primary seller of Kaslan’s BUDDI doll. Desperate to connect with her distant son, Aubrey bribes a co-worker in shipping into allowing her to take home a BUDDI doll destined for destruction, due not only to it being returned as defective but because of the impending release of the BUDDI2 line. The tween Andy questions his mom’s bringing him a child’s toy, but soon Andy bonds with Chucky (who, ridiculously, decides to name himself) and wacky, gory hilarity ensues. 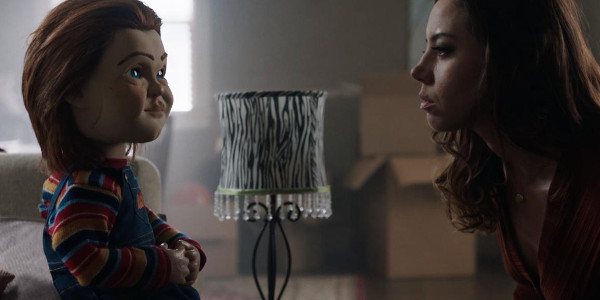 In order to get into the mindset of this remake, one has to realize that this is nothing like the original film in terms of tone. While the classic Child’s Play had a murder mystery element to the slasher, this film decided to emulate the 80’s over-the-top schlocky gorefests that haunted the aisles of Blockbuster Video, waiting for us to laugh and cover our eyes. It is appropriate that in one scene the kids are watching and laughing at The Texas Chainsaw Massacre Part II from 1986, because that film has the same spirit as the new Child’s Play. There is gore and scares aplenty but also lots of laughs.

The cast is not too shabby. While it is jarring to see Aubrey Plaza playing a mom role, the explanation as to her being a mother is properly explained. The new Detective Morris (Brian Tyree Henry) is a lovable Mama’s Boy. And Gabriel Bateman’s Andy is a resourceful, strong-willed child. However, it is Mark Hamill’s performance as Chucky that drives this film. 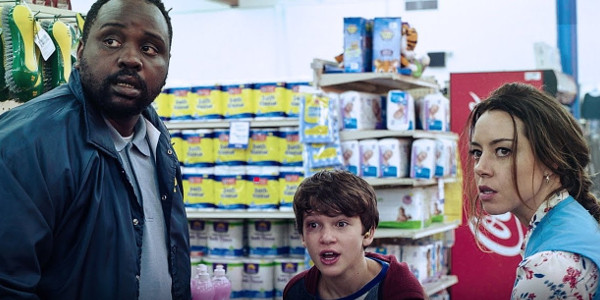 Much like every other bit of voice-work this man has done in his career, Mark Hamill makes Chucky his own. No worries present themselves regarding whether Hamill will impersonate Charles Lee Ray or just do his Joker voice. Instead we have a cheerful, innocent voice paired with a piece of technology that is a walking, talking, killing example of why we REALLY need to be careful how we approach artificial intelligence in the real world. It’s worth noting that the “technology gone wrong” trope was a popular theme in horror films in the 80’s (as in the cult classics Chopping Mall and Deadly Friend) and the theme works just as well here.

While Mark Hamill does a masterful job providing the creeps in his voice work, praise must also be paid to the film’s special effects artists. They elected to avoid CGI in favor of practical effects and animatronics to bring Chucky to life. This helps crank the creep factor to 11 and truly sells the film. Who knew that the sight of a smiling doll, sitting with his hands on his crossed legs could make you feel dread? 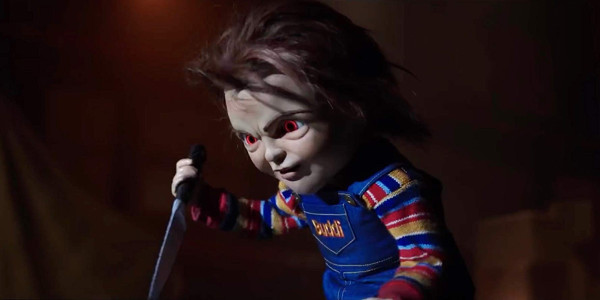 Speaking of dread, composer Bear McCreary is to be applauded for creating a score that really gets under your skin. He was not content with a traditional score, adding toy instruments into the mix. The sound of a child’s piano playing ominous stalker cords is 1000 times more eerie than a regular piano. If that was not enough, the BUDDI theme song he wrote will haunt you long after the film has ended.

In short, if you’re any kind of horror buff, you should give this film a chance. You will find it a fun romp, especially if you are a fan of the heyday of 80’s ridiculous horror films.