I am hard pressed to think of any comic book character who has been more routinely mishandled over the years than Lois Lane. The general perception of the public is that she is a damsel in distress, whose sole reason for existing is giving Superman someone to save. Even in the world of comics, there was a period where nearly every story involving Lois Lane was based around her increasingly insane plans to trick Superman into marrying her.

These stories did a great disservice to a heroine who was inspired by the legendary Nellie Bly and had been created as a friendly rival to Clark Kent and not just a love interest. If Superman is the Man of Steel, Lois Lane is the Woman of Fire, who makes steel melt. The best Lois Lane stories have remembered this fact and shown how this hard-drinking, fast-typing, auto-correct-thwarting woman won Clark Kent’s heart by acting as if she were the one who were bulletproof and could leap tall buildings in a single bound.

This first issue is largely concerned with showing us who Lois Lane is and establishing her identity outside of her relationship with Clark Kent. While her husband does put in an appearance, it comes at the book’s halfway point and serves only as a means of further defining Lois and showing that she’s currently working on a story and away from her family. It also shows that Lois is not the kind of person who worries about appearances, putting a neat spin on the classic Superman/Clark Kent/Lois Lane love triangle, as we see how some of the public views Lois as a manipulative shrew who is stepping out on her husband with the superhero she made famous. Naturally, this bothers Clark far more than it does Lois.

Greg Rucka’s script does a masterful job of establishing this and many other fine details about Lois. She’s the sort of writer who is more concerned about getting the story set than the wording, much to the lamentation of Perry White, who asks her at one point if she accidentally shut off the auto-correct feature of her word processor. (“You can turn it off?” is her reply.) She doesn’t take shit from anyone and gives the business to everyone.

The artwork for this issue is as vivid and detail-driven as the writing. Mike Perkins sports an aesthetic that is complex yet streamlined, with inking that provides just the right amount of dimension and shade to every scene. He also works in many fine details that a lesser artist would miss. For instance, in a scene in which Lois joins Clark in the shower of her hotel room, he does not draw Lois as being instantly and  equally soaked. Logically this makes sense, given that she has a 6’5″ man standing in front of her and hotel showers (even in luxury suites) are not knowing for being spacious.

There is a similar display of craft in the color art by Paul Mounts. There are subtle shifts in the light of the issue, such as in one sequence in which Lois confronts a press secretary who is trying to avoid answering questions on a certain topic. The more dismissive the secretary becomes, the more tinted her skin becomes, giving her an almost alien aspect as she takes on an indefensible position in the face of Lois’ verbal assault. 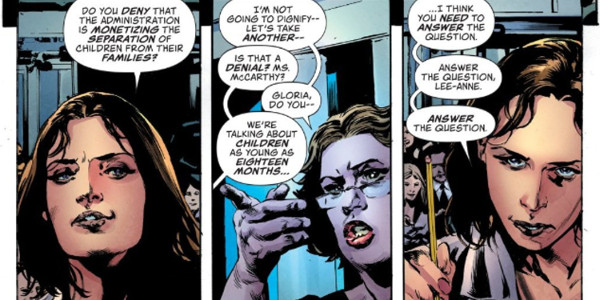 I’ve deliberately avoided mentioning the specifics of the story of this issue, as they seem to have magically come to mirror real-world events. Given the lead time on comic book production, it is impossible for this issue to have been changed to reflect recent political embarrassments in the United States. Indeed, what is revealed regarding an unnamed American president’s policies in this issue is far less graphic and shocking than what real world reporters have unveiled this week.