I hadn’t planned on reviewing the second chapter of Birth of the She-Devil. I do make a point of reviewing the first issue of most Red Sonja series, fan of sword-and-sorcery that I am. Despite this, there’s usually no reason to review these past the first issue, given the niche nature of the genre. I believe that it’s as boring for you to read “This is a solid story but only fantasy enthusiasts will enjoy it,” as it is for me to write it.

So why am I making an exception for Birth of the She-Devil #2? Simply because it became apparent after reading this issue that everything I wrote in my review of the first issue about how Luke Lieberman had changed for the better as a writer was wrong. This chapter gives us Lieberman in the full flower of his oeuvre. Unfortunately, that flower is a corpse blossom and stinks to high heaven.

The first chapter of this mini-series established that Sonja is 18 summers old and already doing mercenary work while clad in her infamous armor. A wanted woman after she murdered the Sultan of Turan (and I hear the Howard purists chomping at the bit over THAT title), Sonja is seeking a long-lost friend who was delivered into the clutches of the warlord Raka, who is a devotee of the god of Chaos and Slaughter. 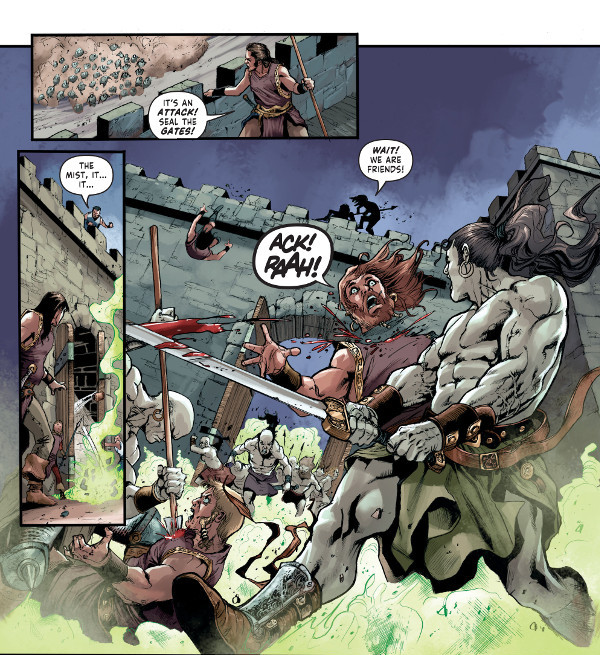 As in his previous Red Sonja stories which pit Sonja against Lieberman’s reimagining of Thulsa Doom, the action of this issue is more focused on Liberman’s villain Raka and his attempt to overthrow the kingdom of good King Andol than on Sonja and her efforts to escape Turan. Ordinarily this might not be a bad choice for the second chapter of a mini-series, introducing the villain and exploring their motivations in deeper detail. Unfortunately, Raka is a shallow villain, even by the standards of the genre, who develops magical powers as the plot demands and has no motivations beyond “More Blood For The Blood God!”

This might be tolerable if Sonja were allowed to take center stage in the scenes that involve her directly. Unfortunately, it is here that Lieberman places the focus on Ozzyus – the outlaw who serves as the narrator of this chronicle and, in Lieberman’s history, the man who taught Sonja all she knew of thieving and fighting after he adopted her. Ozzyus is helping Sonja in her quest, despite having turned over a new leaf and becoming a devote of Mitra, for reasons which are explained in the flashbacks. These flashbacks are also, it should be noted, more focused on Ozzyus than Sonja. 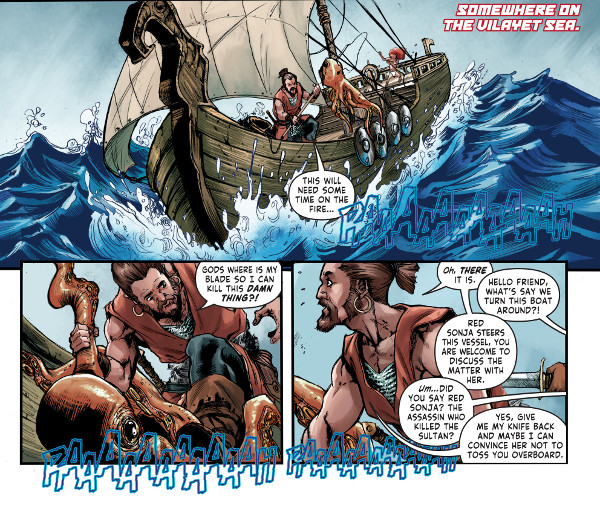 Call me a traditionalist, but I believe that when a character’s name and face are on the cover and a story is sold as being a retelling of their origins, that the story should focus on them and actually retell their origins. Of this book’s 22 pages, Sonja only has dialogue in 12 of them. This includes the splash pages where she only has one or two lines. Perhaps nothing speaks to where Liberman’s focus lies like the fact that he cuts away from a scene of Sonja and Ozzyus fighting the giant octopus that has grabbed their ship to show what Raka is up to. He then returns to Sonja and Ozzyus after the fight is over, clinging desperately to a makeshift raft, complaining of puking and shitting on each other!

Another problem with Liberman’s writing is a dreadful lack of continuity between issues. For instance, the flashbacks in the first issue showed a younger Sonja and her lost friend in happier times, engaging in a friendly duel with real swords. As this issue opens, in a flashback scene set after the one in the last issue, Sonja hands the same friend a dagger and promises to teach her how to use it while they are on the road. 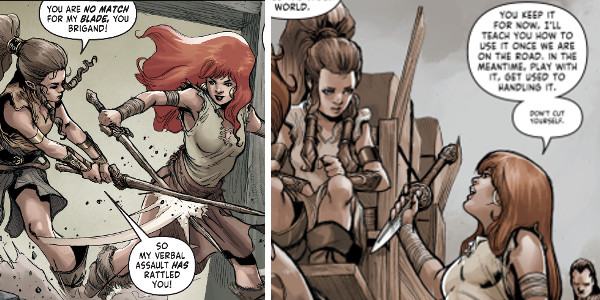 I feel sorry for the art team in all of this, as they deserved a better story to illustrate. Sergio Davila is one of the best fantasy illustrators in the business and he does a great job depicting the action, such as it is. Colorist Ulises Arreola uses different palettes for the modern scenes and flashbacks, putting a subtle sepia tint into the scenes set in the past. Letterer Taylor Esposito places the balloons wonderfully, not obscuring Davila’s work in the slightest

Is this second chapter of Birth of the She-Devil a bad comic? No, but it is a bad Red Sonja story, that would be more appropriately titled Raka – Birth Of A Chaos Mage or Ozzyus – Birth Of A Cohort. Fans of the artists might consider picking it up but there’s nothing here for Red Sonja fans.