Whatever else may be said of DC Comics of late (and I could say plenty!) they cannot be accused of not taking advantage of the Joker movie to sell new comics to new readers. Between a Joker special plotted by John Carpenter, a sequel to Batman: White Knight, and the release of the hardcover collection of that most original of Joker stories, there’s a lot of good, fresh material out there along with the latest reprint editions of Killing Joke and Dark Knight Returns.

Harley Quinn has also benefited from this push, seeing a mini-series with Poison Ivy and the solo Black Label Elseworlds series Harleen, in addition to her monthly title. I suspect these were originally timed against the original release date of the Harley Quinn animated series, which got pushed back to November 29th. And now we have Joker/Harley: Criminal Sanity.  Yet another Black Label Elseworlds story featuring the Clown Prince of Crime and his Queen in another alternate reality.

Has anyone else got the dry heaves yet?

You might be forgiven for being sick of Joker and Harley at this point. I know I was despite generally liking the characters. But it seems that DC Comics has saved the best for last.

Our story focuses on Dr. Harleen Quinzel, who prefers to go by Harley Quinn. A child prodigy who graduated high-school at 14, she’s a brilliant psychiatrist who is renowned for her theories on sociopaths and psychopaths. The twist here is that rather than trying to cure these demented individuals, this Harley Quinn is out to catch them. Her white whale is The Joker – a serial killer who seemingly disappeared after killing Harley’s roommate five years earlier.

In the modern day, Harley is in a foul mood as the Gotham Police Department, with whom she consults as a freelance profiler, have decided to move her roommate’s murder to the cold case division. They don’t share Harley’s belief that the Joker is still out there and is building to something big, despite Harley’s proven track record as a qualified expert. Or, as Harley herself puts it at one point, she solves all their hard cases while the police get in her way and stare at her ass. 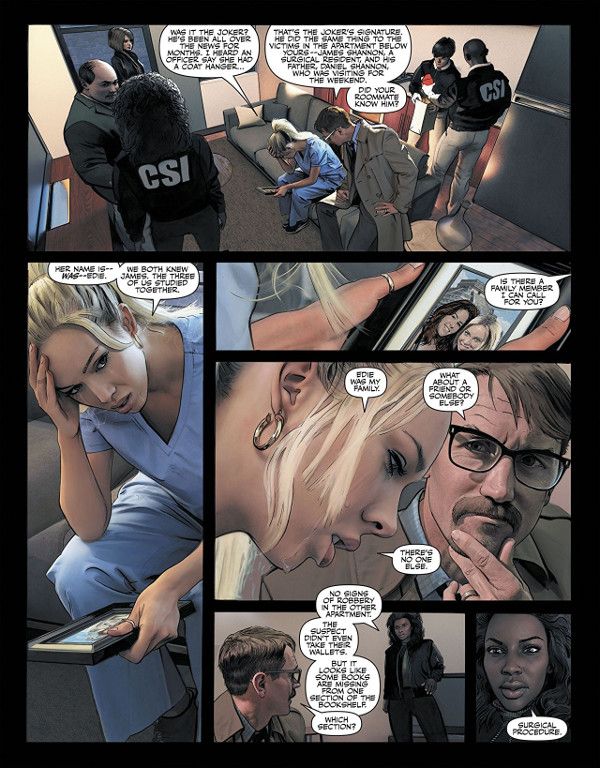 The artwork helps to sell the story, with the modern day sequences depicted like an old film Noir movie in glorious monochrome, while the flashbacks are rendered in full color. Mico Suayan handles the current scenes. Mike Mayhew handles the past. Both artists are utterly brilliant and the alternation between them perfectly breaks up the story flow in a way that keeps things visually interesting.

Kami Garcia’s script puts a neat spin on the Harley Quinn character, giving us the same smart, driven Harley we’ve seen in so many stories before her obsession led to her developing the ultimate case of Stockholm Syndrome. This aspect of Harley’s personality – that she was such a strong, driven, independent woman before she encountered The Joker – is often overlooked and it’s an interesting change to see Harley portrayed with the same obsessive personality she’s always had, but with the reasons and goals of her focus changed while still maintaining the same obsession.

It remains unclear if this version of Harley will remain free of The Joker’s curse. Somehow, I doubt it. But with fantastic artwork and a well-executed set-up, this story remains one to watch even if it does start to tread a well-worn path as it continues. A must-read for any fan of Harley Quinn, true-crime buffs and anyone looking for a different sort of detective comic.